By LRU Writer | On: June 27, 2019
Tattoos are a form of...the reason for getting one remains the same...a symbolic representation of something in an individual's life... arrow tattoos are on the rise in 2019...find the meaning behind different types of design... 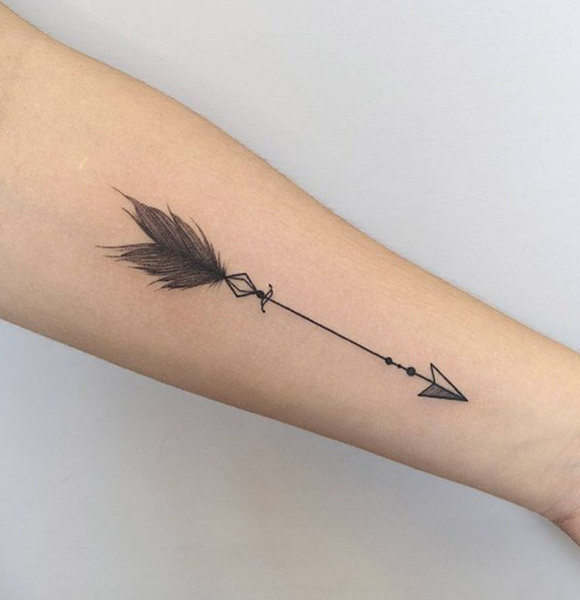 The permanent markings on the body, made by depositing ink into the inner second layer of the skin, are not just the things of now. People have been getting tattoos since prehistoric time.

While the process of getting a tattoo has improved with time, the reason for getting one remains the same; to symbolize something important of an individual's life.

And, among the millions of tattoo designs, arrow tattoos have been the favorite go-to-design. Even on the rise in 2019, celebrities like Kate Del Castillo, Chiara Ferragni, Lili Reinhart and many more have marked themselves with the arrows.

Things You Need To Know:- Most Expensive Makeup Brands & Products In The World

But, don't let yourself be fooled that all arrows are same; there are variations of the arrow tattoo each with different meaning like protection, friendship, positivity, moving forward, achievement, love, and so on.

In case, you wanna have a tattoo with a beautiful meaning, or you wanna be familiar with the variations, here are the five favorite and wondrous arrow tattoos that you may love!

Single arrow tattoos are probably the most common one with its elegant and straightforward design. A single arrow symbolizes defense or protection from harm. The lone among the bunch, the model, also conveys the message of masculinity of the wearer.

Feather arrow is a variation of the single arrow design. The only difference between them is the design has a feather for its vanes. The feathered arrow symbolizes independence and freedom from any bounds.

Another favorite among arrow tattoos is the double arrow design. There are a lot of variations to the design itself; the arrows might be crossed or both pointing the same way or pointing each other. Both arrows pointing in the same direction means that the person is moving forward from their past and is not looking back.

However, if the arrows are pointing in the opposite direction to each other, it symbolizes that the person was in a war and has had a point of imbalance in his life. Arrows that are crossed mean friendship.

Like how the double arrow pointing opposite from each other symbolizes war, the broken arrow is a way of showing that the war is over. Getting inked with the broken arrow is a way of saying that the person has moved on from the conflict and buried the hatchet. Getting marked with the multiple arrow tattoo can be interpreted to unity and well being. A person with this design may want to convey that they are clear on their goal and focused on achieving it.

While there are only five most common and popular variations described, there are numerous other designs as well. And, in case you want to modify the designs to suit your personal needs, you can consult with your tattoo artist. However, do keep in mind that tattoos are permanent and very hard plus expensive to get rid of, so, do give your due diligence first before getting them marked.