List of Most Awaited 2020 Music Festivals Halted By Coronavirus

By LRU Writer | On: March 15, 2020
Coronavirus was declared a pandemic by the WHO on the 11th of March 2020...even before that declaration, the virus was causing chaos and panic all over the world...led to the cancellation of various musical tours and music festivals...the list of music festivals including Coachella, Ultra Music Festival, and Stagecoach have been canceled or postponed... 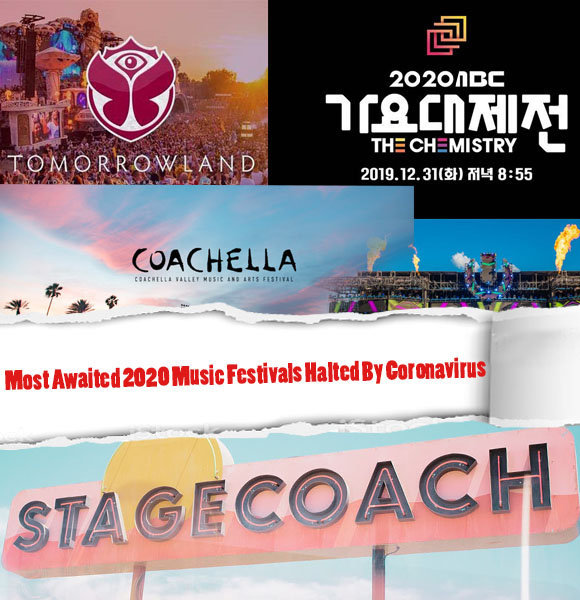 Coronavirus was declared a pandemic by the WHO on the 11th of March 2020. But, even before that declaration, the virus was causing chaos and panic all over the world.

However, since the declaration by WHO, people have become even more concerned and alert about the spread of the disease. And with various state and federal governments around the world banning mass gatherings, it has led to the cancellation of various musical tours and music festivals.

Here are some of the most awaited 2020 music festivals that have been canceled due to the Coronavirus outbreak.

Coachella has been one of the most anticipated music festivals every year. And it was no different in 2020 as well with Rage Against the Machine, Travis Scott, Frank Ocean, and the likes set to perform.

Coronavirus' Effect On Sports:- Here's The Top Nine Sport Events Affected By Coronavirus In US

But, due to the novel Coronavirus rapid outbreak, Coachella, which was set to take place on two consecutive weekends; the 10th, 11th, and 12th, followed by 17th, 18th, and 19th of April, has been canceled. The festival, set to take place at Empire Polo Club in Indio, California, was canceled and rescheduled at the direction of the County of Riverside and local health authorities.

A statement released by Goldenvoice, one of the organizing companies for Coachella 2020, said the following:

At the direction of the County of Riverside and local health authorities, we must sadly confirm the rescheduling of Coachella and Stagecoach due to COVID-19 concerns. While this decision comes at a time of universal uncertainty, we take the safety and health of our guests, staff and community very seriously. We urge everyone to follow the guidelines and protocols put forth by public health officials.

Stagecoach is another music festival to be canceled alongside Coachella. The 3-day festival was initially set to happen from the 24th to the 26th of April 2020. After the cancelation and rescheduling, Stagecoach is now expected to take place from the 23rd to the 25th of October this year at Riverside County, the same place as Coachella.

Tomorrowland Winter 2020 was set to take place in France, at the French alpine ski resort of Alpe d’Huez Grand Domaine Ski. However, this festival has also become another one of the victims of the Coronavirus pandemic. Tomorrowland Winter in 2019 (Photo: We Rave You)

The French government introduced new regulations that banned all indoor gatherings of more than 5,000 people as a measure to control the spread of the virus. Following this introduction, Tomorrowland Winter, which was going to happen from the 14th to the 21st of March 2020, has been canceled indefinitely.

The organizers released a statement on the festival’s website that reads as follows:

Today, it is with a heavy heart that we have to inform you that the French government has decided to cancel this year’s edition.

Since Saturday we were in close contact with the French government about the impact of the COVID-19 virus (coronavirus) and we finally received their official decision. The French government is taking drastic measures regarding the COVID-19 virus in France. Therefore they are enforcing the cancellation of large events, bringing together people from different nationalities on closed festival grounds and event locations.

Despite the cancelation of this leg of the festivals, the next edition of the festival, set to happen from the 17th to 19th and 24th to 26th of July in Boom, Belgium, is still scheduled to go as planned. However, it won’t be a surprise if these concerts get rescheduled or canceled as well if the virus outbreak isn’t controlled by then.

Korea Times Music Festival was set to happen on the 25th of April 2020 at the Hollywood Bowl. However, travel restrictions to Asia due to the novel Coronavirus outbreak have forced the organizers to cancel this festival as well. The organizers announced the cancellation through their Facebook page and proceeded to say the following:

We truly apologize for the inconvenience to those who have been looking forward to this event and ask for your kind understanding.

A rescheduled date for the festival was not given on the announcement. However, the organizers have given ticketholders the choice to either choose a refund or keep their tickets and wait for a rescheduling date to be announced.

Ultra Music Festival gathers a lot of hype and people each year. However, it won’t be doing so in 2020.

Learn About Coronavirus Myth:- Alcohol Vs. Coronavirus! Here's Why You Mustn’t Follow The Myth

Two Ultra festivals, one which was set to take place in Abu Dhabi on the 5th and 6th of March, and another one at Miami, which was going to take place from the 20th to the 22nd of March, have both been canceled. The festival at Miami was canceled on the 3rd of March, and it was Miami Mayor Francis Suarez that announced the cancelation during a press conference held that same day.

More events and gatherings like these can be expected to be canceled over the next few weeks as the novel Coronavirus pandemic continues to spread throughout the world.