By LRU Writer | On: November 13, 2018
The United States of America has a culture like no other nations. With different ethical backgrounds of........America shares its values with all the different parts of the world. American culture can be studied under its origins, food, politics and its value. If you do not know what American Culture looks like, then read this article! 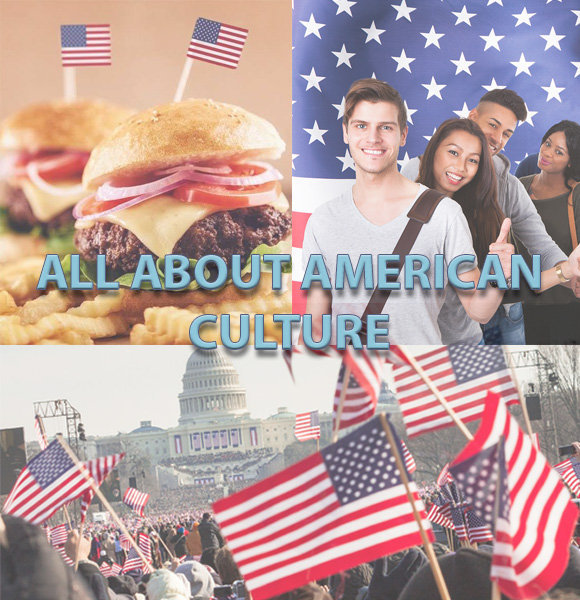 What America is like, is something only American culture can tell us!

With years of history woven together with stories of the native and the blacks, their legacy and culture all standing united with America, making it a grandeur America indeed!

From the moment the great Christopher Columbus stepped into this land and officially declared it to be found, or even before that, the people and their culture hold all the credits to today’s unbeatable America.

Everybody knows what America looks like from the outside, but the American culture has a lot to say!

Everybody had a misconception about America belonging entirely to the whites. But, what its history tells us is an entirely different story.

America first toddled out with people who were keen for survival. These people, who sprang and endured their habitat in this part of the regions, was the Native American; popularly known as the American Indian, Amerindian, Aboriginal American or First Nation People.

Before being declared as a Melting Pot of the world, America belonged singularly to the natives. Native Americans are the most primitive people that resided and owned America (Photo: latinosinlondon.wordpress.com)

The ancestor fluted their culture with bows and arrows, wearing a mohawk of feathers and bizarre pieces of jewelry that made them stand as significantly as they were back then.

But the native's rule remained temporary when the Europeans marched into the land and drove away their 50 million people who had started calling the place their home.

The tale of the natives ended there and the nation then belonged to the Europeans.

When the Europeans came to America, they didn't come here alone. Their lavish lifestyle and an attitude to make other people work brought another darker history of the black in the nation.

The Europeans then introduced to what is  America’s current second largest minority group “African Americans”. The impeded journey of the blacks fighting for their rights (Photo: cs.wikipedia.org)

Blacks, who fought their way through oppression and slavery entered America through 20 selective people who landed in the English Colony of Virginia as indentured slaves. Their African descendant's history was dated long before 1619 A.D.

Ever since, these ethnic groups have struggled for equity, fought for freedom and reevaluated their identity. Growing up with their staple foods of collard green, rice and oak, and dancing and singing beyond their abolitionism, these African Americans has raised their bars and have officially belonged to America.

They have brought this nation great icons like Martin Luther King and the most beloved president Barack Obama. Despite largely holding the bygone days of slavery, nevertheless, African Americans have made basic and lasting contributions to American history and culture.

What Is American Culture?

It's only a matter of wonder, with so many histories and so many settlements, how might the American Culture be like?

Diverse people and diverse background, gave more culture and tradition to the land, which got it counted into one of the riches cultural countries all over the world.

As per Cristina De Rossi, an anthropologist at Barnet and Southgate College in London says:

"Culture encompasses religion, food, what we wear, how we wear it, our language, marriage, music, what we believe is right or wrong, how we sit at the table, how we greet visitors, how we behave with loved ones, and a million other things"

America, now considered as a melting pot holds a little bit of culture from all over the world.

The Pinnacle of American Culture begins with their distinct values that transform each individual’s identity. Americans are Independent, believe in equity and prefer a pretty laid back informal conversation.

They speak both English and non-English and are comfortable wearing jeans and sneakers.

When the topic comes about food, no one can imagine the depth of culinary delight America holds.

Starting from the elegant Japanese sushi to hot and fiery Chinese dishes, the most exquisite Italian cuisines to the soft, most delightful German bakeries. America has it all. It promotes both the international high graded cuisines and the local foods.

America is the epitome of the culinary melting pot But no one can deny the fact their most famous big hamburgers that don’t even fit inside their mouth and the sizzling hot dogs with mustard sauce are their ultimate choice.

The American Political culture holds multiple core elements. There are many things that Americans define in their value.

The Americans love their freedom. They think that freedom is essential for personal development and fulfillment. These liberty ranges from limited government to economic liberty incepting the concept Laissez-faire capitalism. Political culture isn’t complete without Political equality, where every individual is treated as equal under the political sphere. Most Americans also believe that democracy is the best form of government and tend to support its policy.

Their culture is segregated under the terms of majority rule, minority rights, rugged individualism, conformity, and multiculturalism.

No matter who you are and where you come from, you blend in the culture, unite together and make America stand out as one of the most powerful nations in the world. That’s why America isn’t just called ‘America’ it’s called the ‘United States of America.