The Best Holiday Places That Exist: Summer And Winter Getaway!

By LRU Writer | On: February 05, 2018
The Best Holiday Places That Exist: Summer And Winter Getaway! When we start realizing how vast and beautiful our world is, we realize how small our problems are. To explore the limitless wonders of the earth we live in, everyone needs a break once in a while! 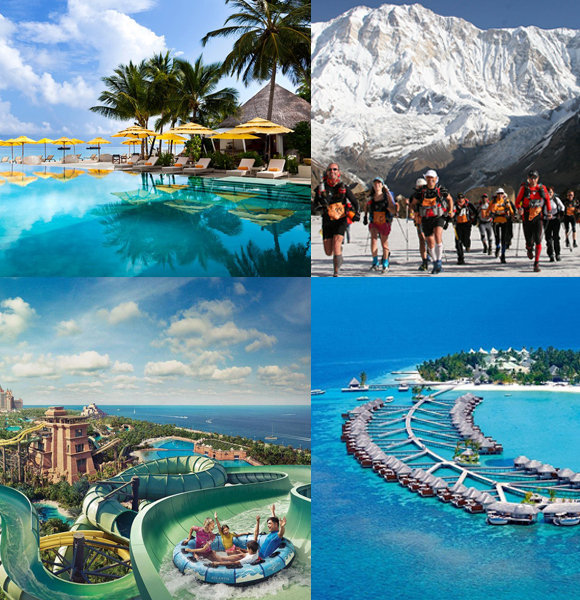 When we start realizing how vast and beautiful our world is, we understand how small our problems are. To explore the limitless wonders of the earth we live in, everyone needs a break once in a while!

But, we are not talking about a 30-minute nap or a cup of coffee kind of break. It’s about waking up in a new dimension of the world leaving all your stress behind. Yes, you guessed it right: today, we bring you an array of top breath-taking holiday destinations perfect for both summer and winter getaways. Let’s begin!

The heart of Czech Republic, Prague is also known as ‘The City of a Hundred Spires’ due to its snow-capped spires and cobbled, winding streets. The ‘fairytale city’ is filled with gorgeous architecture and is known for Old Town Square, colorful baroque buildings, Gothic churches, and medieval Astronomical Clock, among other things. Caption: The beautiful city, Prague in the evening lights.

You will also enjoy your evening walks as the gas lamps throughout the city center provide a romantic vibe. In addition to that, cozy cafes will help you unwind and have a relaxing time.

Netherlands’ capital city, Amsterdam, is known for the artistic heritage, elaborate canal system as well as narrow houses with gabled facades and the 17th centuries’ legacies. Caption: Amsterdam, the capital of Netherlands.

The city's main attractions include Rijksmuseum or Anne Frank House and the Royal Carré Theatre, which features performances by several athletes from around the globe.

You will also enjoy going on a shopping spree in smaller areas, and the various bike paths will bring back your love for biking.

The country that embraces the world’s highest mountain, Mount Everest, Nepal is one of such places that offer a handful of real hidden gems. The intensely spiritual country is a wonderland where you can witness a variety of cultures and traditions being practiced every day.

Additionally, you are going to experience the variations of climates throughout the three regions within a short distance. The mid or the Hilly region has mild weather, and it’s also where the heart of Nepal, Kathmandu city, lies. However, as you move towards the Himalayan region, it gets colder, but, the lower part, Terai, is the hottest one. Besides the several mesmerizing mountains, major attractions include the popular tourist areas such as Pokhara, Chitwan, Lumbini and many more. You can even go on crazy adventures such as the world’s third highest Bungee Jumping from a bridge in Tatopani, which is more than 160m high.

There’s no doubt that we can already feel the cold breeze when we hear the name Iceland. Contrary to its name, Reykjavik, Iceland is the world's greenest city and one of the most breathtaking and surreal places in the world.

The capital city Reykjavik; ‘Smoky Bay’ in English, offers a ton of natural hot springs as well as cozy cafes and an artificial beach! The rotating Perlan glass dome provides dream-like views of the sea and nearby hills. Caption: Reykjavik, the city of Iceland in its glory.

Did you know that the city is one of the safest places in the world? With the history of only one police shooting ever, the city is perfect for solo travelers as well.

If you want to take your vacation to the next level, the city Dubai is the answer to your prayers!

The luxurious city will make you want to live there permanently as it has a lot to offer. The largest shopping mall in the world, The Dubai Mall, will make all your shopping dreams come true. Other major attractions include the city's ultramodern architecture, a lively nightlife scene, and not to forget, The Dubai Fountain! Another main attraction of Dubai is the Palm Island, Palm Jumeirah, that's filled with the most expensive and lavish hotels. And, if you didn’t already know, the island is all artificial!

Ready to pack your bags yet?

Travelling to new places is an exciting adventure. But, always remember to be safe wherever you go. Make sure not to lose your valuable documents and use a map every time. If you go to countries where English is rarely spoken, use apps like Google Translate or hire a tourist guide for more effective communication. Lastly, don't forget to have fun to the fullest!