By LRU Writer | On: July 02, 2018
Like the scientific name suggests "Food of the Gods" in Greek, cocoa has been living up to its reputation given its versatility and likeability. Discovered by the Mayan Indians of Mexico and Central America about 2000 years ago, today's chocolate lovers alone makes over $75 billion spending on chocolate worldwide. 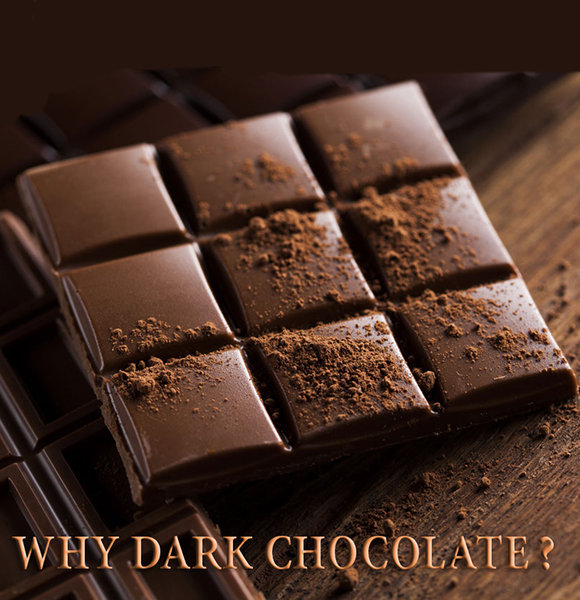 Theobroma cocoa, popularly known as just cocoa, is the type of plant whose seeds have brought much joy to this world.

Like the scientific name suggests "Food of the Gods" in Greek, cocoa has been living up to its reputation given its versatility and likeability. Discovered by the Mayan Indians of Mexico and Central America about 2000 years ago, today's chocolate lovers alone makes over $75 billion spending on chocolate worldwide.

While many choco-freaks are going gaga over dark chocolates, many may not be aware of dark chocolate's benefits. Let us speculate some pros of dark chocolate, known to food scientists, on human health conditions and the advantages it has on the skin of its consumers.

1. Good Source of Antioxidants For Health

The raw, unprocessed cocoa beans are a major source of antioxidants, the biological components to guards our body from diseases. They help in neutralizing free radicals, which are unbalanced (harmful) compounds produced by the daily cellular activities in our body.

The antioxidants present in the food, namely polyphenols, flavanols, catechins - inhibit oxidation, especially one used to counteract the deterioration of stored food products or removes potentially damaging oxidizing agents in a living organism. As a result, the immune system of organisms is highly flourished and diseases are prevented quite easily.

The flavonoids present in dark chocolate - especially flavanol and catechin - can stimulate the lining of the arteries, endothelium, to produce a significant amount of Nitric Oxide gas. Among many other, the main function of this gas is to send signals to the arteries to relax which in turn results in lower resistance to blood flow and therefore stabilizes blood pressure.

A lower resistance to blood flow and a stable blood pressure corresponds to sustaining good health and a lesser amount of heart disease or any other disease really. A recent study found that dark chocolate helps restore flexibility to arteries while also preventing white blood cells from sticking to the walls of blood vessels - both common causes of artery clogging. However, dark chocolates with at least a 70% of the cocoa ingredient should be consumed and make sure that they are genuine. Head over to your closest store and get yourself a packet - NOW!

The content of flavonoids in the dark chocolate provides protection against the harmful UVB rays of the sun. The ultraviolet B rays are relatively short wavelength rays which penetrate into the superficial layers of the skin and acts as the cause for sunburn which can cause a permanent damage to the skin in the long term - sometimes cancer even.

Apart from keeping your skin moist and well nourished by the content it carries, regular consumption of dark chocolate helps you achieve a smooth, problem-free complexion.

Dark chocolate, when combined in the right quantity with caffeine, makes for an excellent detox for the skin. It sloughs off the dead skin cells and allows the newly exposed, fresh skin to breathe freely.

Dark chocolate contains healthy fats which work to keep the skin hydrated and youthful rather than causing weight gain.

A 2009 study published in the Journal of Nutrition demonstrated flavonoid-rich dark chocolate’s ability to improve cognitive ability, specifically in the elderly. This cross-sectional study of over 2,000 participants ages 70 to 74 years old looked at the relationship between the intake of chocolate, wine and tea (all rich in flavonoids) and cognitive performance.

The study concludes that “intake of flavonoid-rich food, including chocolate, wine, and tea, is associated with better performance across several cognitive abilities and that the associations are dose dependent.”

The researchers suggest that further studies should take into account other bioactive dietary substances in chocolate, wine, and tea to ensure that it’s their flavonoid content that helps the brain so much.

Researches have shown that the ingestion of flavonoids rich dark chocolate increased the blood flow in the cerebral gray matter which helps diminish the conditions such as stroke and dementia.

“This is the first time that we have looked at the impact of large amounts of cacao in doses as small as a regular-sized chocolate bar in humans over short or long periods of time. These studies show us that the higher the concentration of cacao, the more positive the impact on cognition, memory, mood, immunity and other beneficial effects."

Dark chocolates also induce stress-relieving hormones and promote our physical as well as mental attributes. They also contain biological substances that prevent the breakdown of collagen - a wrinkle-busting protein that keeps skin smooth and youthful.

The compounds in dark chocolate are highly protective against the oxidation of Low-Density Lipoprotein (LDL). Oxidized LDL refers to the protein which has reacted with the free radicals produced by the cellular activities in the body and is not good for our health. The prevention of oxidation of LDL, in the long term, causes the lesser amount of cholesterol to lump in the arteries and significantly reduces heart-related problems.

In a controlled trial, cocoa powder was found to significantly decrease oxidized LDL cholesterol in men. It also increased HDL and lowered total LDL in men with elevated cholesterol. The oxidized LDL which has reacted to other free radicals is reactive in itself and has high chances of damaging our tissues - mostly the lining of the arteries which can cause blood coagulation along with other harmful stuff.

The cocoa which is abundant with powerful antioxidants protects lipoproteins against oxidation damage and reasonably lowers oxidized LDL. It can also reduce insulin resistance, which is another common risk factor for many diseases like heart disease and diabetes.