By LRU Writer | On: December 19, 2016
"I knew she was The One straight away” Ore Oduba Celebrated His First Wedding Anniversary With Wife. For a couple, their wedding anniversary is undoubtedly one of the best parts of their marriage. One of our favorite celebrities, the Strictly Come Dancing star Ore Oduba, and his wife TV researcher Portia also shadowed the same scheme. 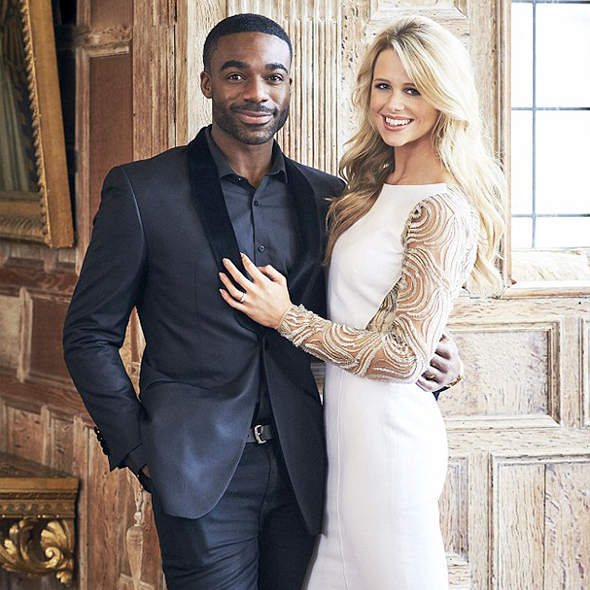 For a couple, their wedding anniversary is undoubtedly one of the best parts of their marriage. One of our favorite celebrities, the Strictly Come Dancing star Ore Oduba, and his wife TV researcher Portia also shadowed the same scheme.

They marked this particular day of their life getting back to the same venue where they took their vows and tied their knot. Let’s find more about the love birds in our story today.

In the exclusive photo shoot with Hello on November 1, 2016, British TV sports presenter and his wife Portia went back in their wedding reception venue (Penshurst Place) in Kent to recreate the moment.

Caption: Reliving the past, is always a joyful moment.

During an interview, the couple revived the memories of the marriage. When asked about the most dominant memory of the day, Portia stated,

“My over-riding memory is of Ore;s emotions- he was so teary throughout the day.”

When the mic turned to Ore, He said,

“I knew she was The One straight away. From the first two months, we talked about wanting children. The way we are with each other hasn't dipped or changed. I know it will always be fine when Portia is here."

He shared his feeling on his wedding in an interview with Mirror in October 2016 where he expressed,

“On my wedding day, I cried from 11 in the morning until 2 am that night.There’s a picture of me wailing, my best men there laughing and Portia absolutely cracking up next to me – I am the only one crying.”. 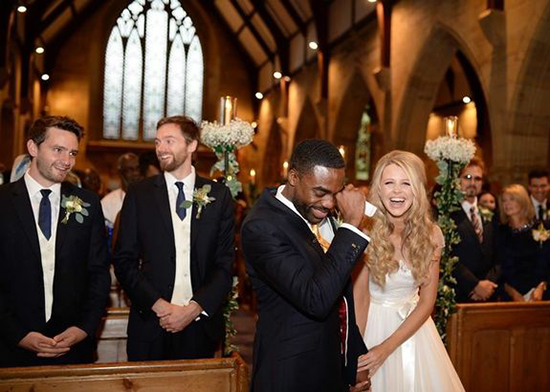 Caption: Ore Oduba got emotional at his wedding (2015).

It is reasonable to have tears in your eyes when you finally achieve the most anticipated moment in life. We all know it is hard indeed to hide one's emotions at such a moment.

The rising contestant of Strictly Come Dancing and his supporting wife also mentioned about the dance that they did on their wedding. Portia spoke about her first dance in their marriage,

"Everyone says, 'Your wedding dance must have been amazing.' But it was just a little dance. Ore whispered, 'Shall I lift you up?' I said 'No' while smiling through my teeth. Now I see him lifting Jo up and spinning her around,"

Just in case you don't know, these love birds first met during an event at Loughborough University where Ore Oduba got his degree.

Following that day, he never missed a single chance to impress his girlfriend. Although Portia had warned Oduba to propose in public, he played different pranks to make his girl confused.

He hustled her to several romantic excursions, at the occasion of Portia's Birthday Oduba took her for a special lunch to London's famous Landmark The Shard and a straight trip to Dubai right after.

Listening to Smooth FM in the car home, remembering 2 years ago tonight when my life changed forever ???? #shesaidyes #lovesongs ????

He attempted every possible way to make his proposal more memorable and an epic one. Finally, after returning from the holiday in Dubai, he popped the question in the presence of Portia’s beloved ones at her family home in Kent. And the proposal was accepted. A year later they got married on November 1, 2015.

With all the hard work and enthusiasm, Oduba had been performing in Strictly Come Dancing.

He's living up to the standard expected by the fans by treating them with his splendid scores in the competition.

In the interview with Hello, Ore mentioned how Portia had been the support.

“It's easy for this show to become like a runaway train,”

He presented all the credit to his lovely wife for his achievement in the show. He stated,

“Portia being so supportive, has made it all possible. She keeps me grounded. She's my choreographer, stylist, physiotherapist as well as wife,”

He expressed his excitement about his lately profound passion when he said,

“ I want to keep dancing because it has given me so much. My true passion is sport and covering big live events such as the Olympics. Now it feels like I've played a part in a national event. There's something so exhilarating about performing for a live audience.”

With his commendable work as a TV presenter, along with an outstanding personality and performances in Strictly Come Dancing, he has undoubtedly won the heart of all. Many of his fans have shown their love through their tweets which contain some tweets of his transgender fans too, who expect him to be gay.

The finale will be aired on Saturday, December 17, 6.35 pm, BBC One. As Oduba has been able to win the heart of all judges and viewers. With that support of all fans and his efforts, there is a probability of him winning the show. We want to wish him all the luck for his upcoming performances.