Did Tom Pelphrey Get Married To His Girlfriend Who Spent Family Time With Him?

By LRU Writer | On: May 03, 2017
Did Tom Pelphrey Get Married To His Girlfriend Who Spent Family Time With Him? Daytime Emmy Award winning actor Tom Pelphrey is someone who has lacked no success in his professional life. But today, we take a look at his famous relationship with his girlfriend who he shared some family time with. However, did they get married though? 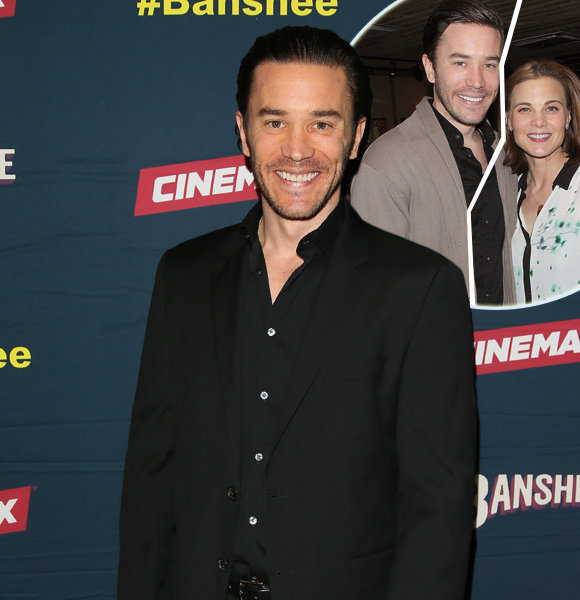 Daytime Emmy Award winning actor Tom Pelphrey is someone who has lacked no success in his professional life. But today, we take a look at his famous relationship with his girlfriend who he shared some family time with. However, did they get married though? This is what the fans wonder, and if you are wondering that too, then you've come to the right place.

Got Married To His Girlfriend? Where Do They Stand Now?

Tom and Young and Restless actress Gina Tognoni were once in a relationship with one another and the relationship between them was serious as well. The two never really advertised their relationship in public, but in an interview back in 2005, the pair revealed that they started dating on Valentine's day. They did not mention which year but they did say that.

When the interviewer asked about the start of their relationship, they answered in such fashion.

Gina Tognoni: We started dating just around Valentine’s Day. I was Tommy’s Valentine and he was mine.
Tom Pelphrey: I had a friend here from Ireland and I wanted to get Gina some Valentine’s Day stuff. So me and him were sitting in my dressing room — we had some time to kill — and wrote some really crass poems. But they all rhymed, so I was like, “This is kind of doable since it was sweet that it rhymed because we took the time.” Hey, I just rhymed right there! It really hooked her right in, I think. Caption: Tom and Gina Tognoni had a healthy relationship back in the days.

Furthermore, the love they had for one another was so deep that they even met each other's, families. They said,

Tognoni: Yes. I spent Easter with his family and Mother’s Day. And his granddad is a big fan.

Pelphrey: My granddad’s favorite character on the show since I started has always been Dinah. So, for his birthday, I got him an autographed picture of Gina. This was before we were dating. I was like, “Gina can I get a picture of you autographed?” And she was like, “What are you going to do with it?” I was like, “Geez, girl, give me a picture.” So my grandfather had it prominently displayed, so she’s been around the family longer than she even knows.

Pelphrey: On Easter, I told my grandmother that I was going to bring Gina home, but I didn’t want to tell my grandpa. I wanted to surprise him. So my grandma was like, “Okay, I won’t tell him, but I’ll make sure he’s dressed good because if she’s here and he’s not dressed good, he’s going to be mad at me.” So we walk in the front door and he goes, “Oh!” He makes this sound and my mom goes, “Dad!” And he says [casually], “Oh, hey. Hey.”

Tognoni (laughing): It was wonderful meeting the whole Pelphrey clan.

However, despite having such a strong relationship, the two could not take the relationship to the next level and thus they broke up without much publicizing about the reason for the split. Gina is happily married to her husband Joseph Chiarello since 2009.

Following the split with Tognoni, Tom dated Banshee actress Lili Simmons. The love between them was even open over on social media. However, lately, the two have preferred to stay silent about their relationship, and that is why people often wonder if the two are still together or have split. But the fact that they have not been open about the nature of their relationship currently disables us to reach any significant conclusion which is why we might need to wait for them to clarify as to where do they stand in their relationship now.

One thing is for sure, he is a ladies man, that fends off all the gay rumors that usually surround most of the celebrities.

A Short Bio of Tom Pelphrey:

Born on July 28, 1982, in Howell Township, New Jersey, United States, Tommy Pelphrey is an American actor who has been a successful personality in the industry. He has won the Daytime Emmy Award for Outstanding Younger Actor in a Drama Series, and that is enough to prove just how talented he is when it comes to acting.

He has been a part of several successful projects like "Excuse Me For Living," "Guiding Light" and much more and the success of those projects have resulted in him earning a good sum of money. But still, no official statement on his net worth has come forth from the actor.

Stay with us for more news on Tom Pelphrey!