By LRU Writer | On: November 25, 2016
The overloaded cuteness,Cuban features and the striking look at an early age signifies for a strong future in the acting industry of Hollywood. Having possessed all the mentioned quality, the cute Cuban-American star Adam Irigoyen through his lullaby performance in the Disney series ”Shake it up” has been the favorite star kid for all the Disney viewers and sweeping away all the attention at this young age. 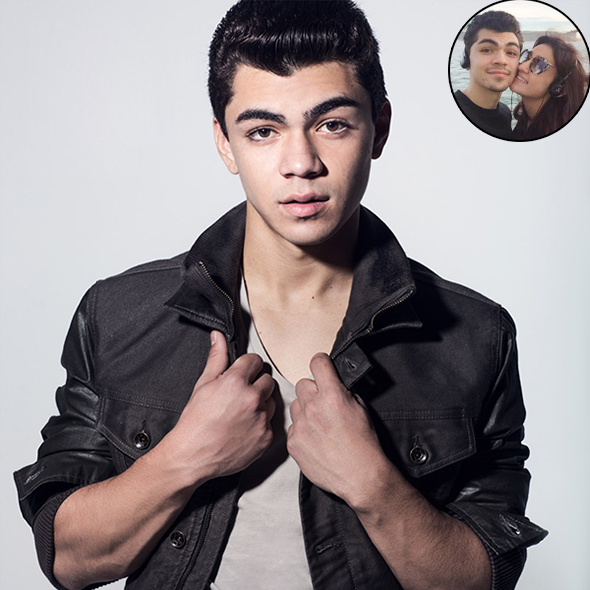 The overloaded cuteness,Cuban features and the striking look at an early age signifies for a strong future in the acting industry of Hollywood. Having possessed all the mentioned quality, the cute Cuban-American star Adam Irigoyen through his lullaby performance in the Disney series ”Shake it up” has been the favorite star kid for all the Disney viewers and sweeping away all the attention at this young age.

But, has this star caught his own breath and become a die heart fan for any little princess or is he dating any lady inside the dark woods. So, today we shall cover the details of the young artist and bring on the news about his lady along with his singing, career plans inclusive of some family story.

Hide n Seek: Who is the lady love? Is she tucked in well?

Lucky are the ones who gets to have a girlfriend off the screen and on the screen. It's quite cheeky! But in fact, it's partly fun when the star gets to play the dual role with on-screen love and off-screen girlfriend. In the series of “Shake It Up”(2010), the actor is seen dating and getting romantically involved with Ainsley Bailey as Dina Garcia, Deuces.The series features the boy falling head over heels in love with the lady where the man is on the full go to impress his girlfriend’s mother. Caption:Ainsley Bailey and Adam Irigoyen in the Disney Series of "Shake It Up"(2010)

Despite having worked in endless of series with the lady, the star seems to have no desire of pulling the on-screen romance off the screen. Therefore, the star limited their relationship to friendship putting an end to all the brewing rumors.

However, while scrolling through his Twitter account we came to know that the man is in the relationship with his lady since last year.The lady has posted a picture of her and the star on 18th May 2015 on her Twitter account flaunting her one year anniversary with the teen star.

Similarly,the duo is still together and was seen celebrating the artist 18th birthday. On account of his birthday on 7th July 2016, the lady had made a collage of their pictures and had posted the picture on her Twitter account.

Well, the lady seems to be really precious for her man. Therefore he really doesn't want to share any details about his secret women with the public. Maybe he wants to keep her completely away from the media attention thinking that it would ruin their relationship .What so ever may be the case but the man is really protective over his lady and therefore keeping her well tucked in.

Besides acting does Adam want to take a chance in singing?

The star is the biggest fan of singer Selina Gomez and dreams of becoming a Spanish singer like of Selina Gomez. On an interview posted by Latina.com on 18th April 2011, when talking about his singing career plan he said:

"I definitely want to do what Selena did just the boy version. I want to sing in Spanish. When I started realizing that I wanted to sing, at that time Selena didn’t sing. So I was like, You know, I can be the first person on Disney Channel to actually sing in Spanish. And then Selena came out.  Well, now I’ll still be the first boy! That would be great. And then maybe later on down the line Selena and I can do a song together in Spanish.  I mean, who knows?  That kind of idea is what I’m going for."

Similarly, on an interview posted by Nbclatino.com on 11th December 2012, the actor revealed his prolonged desire of becoming a Disney superstar and a great singer and how his dream had come true.He said:

“I’ve had big dreams ever since I was really small, I knew I wanted to be on the Disney Channel and make music and now I’m close to making my dreams come true.”

He got the opportunity to show his talent from the Disney series “Shake it Up”.The project encouraged the man to get more involved in music along with dancing and therefore in the midst of November 2013 he recorded his single “School Girl” both in English and Spanish.The teen is really proud of his work as he considers himself to be the one who has kept the soul of Latin alive through his music. He said:

“I want to be known as someone who keeps the soul of Latin music while keeping it fresh and cool,I want it to be something my grandparents could listen to but that my friends will love.”

Well, man, that’s a real progress in such an early age. We are looking forward on seeing you more in series, movies and in more of music.

Adam Irigoyen was born on 5th August 1977 in Florida, Miami to a teacher mother Annie Irigoyen and to an educator father Eric Irigoyen. He was born to a Cuban mother and to an American father which made him a star of  mixed ethnicity. He also has two siblings, a brother named Jake Irigoyen and a sister, Kimberly Irigoyen who are both younger to him.

The man is a family lover. His parents have always supported his decision and have always become a strong backbone during his acting career.On an interview posted by  Nbclatino.com on 11th December 2012, he said:

“It was a big risk for any family, but my parents knew that this was something I wanted to do for the rest of my life,”

He attended Christina M. Eve Elementary before getting involved in the acting career. He started his acting career at the age of 11. He enjoys singing,dancing and playing basketball. He has an estimated net worth of $500 thousand dollars. He accumulated the net worth by endorsing various ad's and through Disney Series. He was also nominated for Young Artist Award for consecutively two years 2011,2012 for the television series "Shake It Up" along with the Alma Awards in the year 2012, for the supporting role in Shake It Up.