By LRU Writer | On: December 07, 2016
If you have seen the movie Maze Runner: definitely The Scorch Trials (2015), then you surely might not have let the unusual character of Marcus portrayed by Alan Tudyk surpass from your glance. Many women since then have become a die heart fan of the artist while few might be secretly dreaming him to be their Prince Charles. 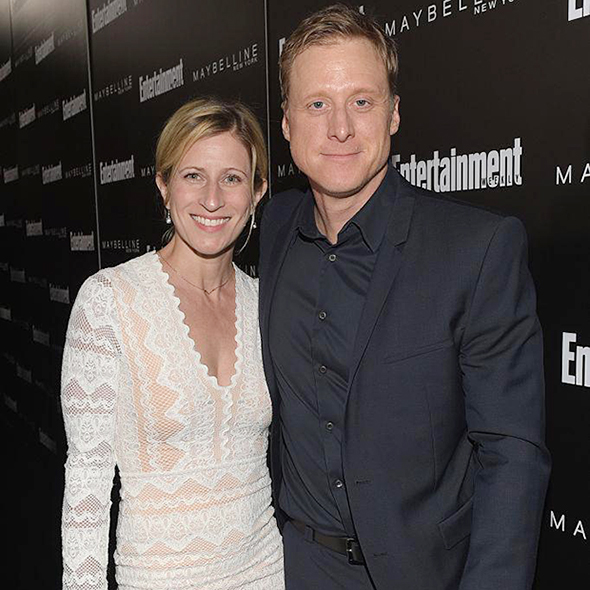 If you have seen the movie Maze Runner: definitely The Scorch Trials (2015), then you surely might not have let the unusual character of Marcus portrayed by Alan Tudyk surpass from your glance. Many women since then have become a die heart fan of the artist while few might be secretly dreaming him to be their Prince Charles.

Well, ladies you should put a break on your dream as your man AlanTudyk is married to his beautiful wife, Charissa. This news might break few hearts while few who have managed to keep a hold on their pain might still be eager to know about the complete marriage detail of the wedding and their love life.

Today, we are heading to intervene the married life along with the love life of the actor Alan Tudyk.

Officially Married to Charissa: Know about their love leading to Marriage

Alan Tudyk though has not revealed about dating women in past he finally found a perfect life partner with whom he seems to be willing to spend his entire life. Before getting married, actor Alan might have been in a relationship with Charissa, a Choreographer for quite long. Neither the Alan nor Charissa has opened about their meeting events along with their dating events.

On 22nd December 2015, through the Twitter account, Alan broke the news about his engagement with his girlfriend Charissa where he explicitly mentioned about exiting from the bachelor market.

His lovers, as well as well-wishers, adopted the story in a positive manner though it broke the heart of few people the duo with showered with plenty of best wishes for their journey. No picture of the engagement ring nor the details of the proposal made by Alan to his would-be wife Charissa got disclosed. After the meeting in December 2015, Alan and Charissa took eight months to tie the knot finally.

On 24th September 2016, Alan and Charissa conducted a grand wedding at The Paramour Estate in Los Angeles. The wedding was a successful one hosted with a perfect range of food exclusively bought in by Contemporary Catering. Charissa and Alan both complimented each other gracefully in the wedding. Caption: Alan with his wife Charissa Barton on their wedding day at Los Angeles on 24th September 2015.

On 25th September 2016, Allan posted the official picture with his bride where he Tweets and shares the funniest moment he had with the Minister for the wedding ceremony.

His lovers and followers showered the newly wedded couple with loads of best wishes and love through tweets on their Twitter account.

Alan and Charissa are still together enjoying their married life as the Charissa has shared a picture of her and her husband spending quality time in San Fransisco. Claimed as a Gay:

In the year 2000, Alan portrayed the character of a German gay drug addict in the movie 28 Days with the co-star Sandra Bullock.The role played by Alan was so genuine which compelled most of his supporters to think him as gay.

Caption: The trailer of 28 Days where Alan portrays the character of German Gay drug addict posted on Youtube on 29th December 2009.

Accordingly, the single status of Alan added blaze in the fire when it was just so impossible for the actor to remain single without dating any beautiful Hollywood female celebs. Such act finally made his supporters to raise a question of his sexual preference.

But it looks like the rumor brutally came to an end after he married his girlfriend Charisse. Those who had confusion regarding his sexual orientation might have learned him to be an ordinary person.

A happy Husband and Successful actor. How great might be his Net Worth

Before being a happy, successful actor who started his career from the Epic proportions. From the Broadway debut, he worked in movies like Wonder Boys(2000), Frozen(2013) and Trumbo(2015).

From movie, he spread his territory to the television zone where he was landed with a famous role as Hoban in FireFly(2002-2003). The series turned out to be a hit which gave Alan name and fame. On an interview posted on Youtube on 23rd August 2016, Alan shares about his impeccable journey of landing in the role of Hoban.

With all the hard work and success he has accumulated the total net worth of $2 million. He has further undertaken projects like Wreck-It Ralph 2 (2018) and Frozen 2 which would add success and net worth to the existing asset of the actor.