By LRU Writer | On: January 09, 2017
Actor Billy Flynn Married A Fellow Actress And Both Have Set Pretty Sweet 'Relationship Goals'. Only a few people are blessed by cupid to carry their screen love to reality, among the few lies Actor Billy Flynn blew a hot romance with his co-star which later got converted to the wedding. From the on-screen fling to off screen Flynn has given a relationship goal to his fan followers and his colleagues. 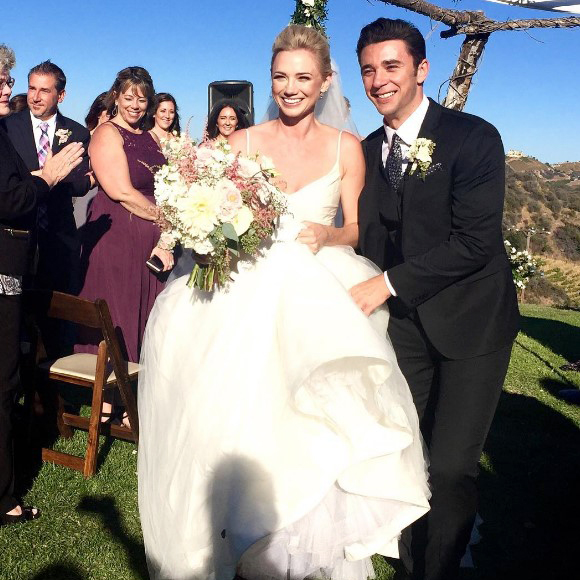 Only a few people are blessed by cupid to carry their screen love to reality, among the few lies Actor Billy Flynn blew a hot romance with his co-star which later got converted to the wedding. From the on-screen fling to off screen Flynn has given a relationship goal to his fan followers and his colleagues.

Today, we shall be covering the love story and marriage event of Billy Flynn along with net worth.

The Journey From Screen Love To The Off-screen Wedding:

After having met his co-star, Gina Comparetto in 2014 looks like Billy Flynn had started to develop an admiration for her which made him fall in on knees and propose her on May 29, 2015. When revealing the entire moment of the proposal in an interview with On-Air-On-Soaps, Billy said:

"Gina was still in her sweats, her makeup was half done, and it was such a perfect moment.  I was in the other room, and I said ,I love our life. She said, Me, too.  I said,‘Would you come out here for a minute. I then got down on one knee and proposed. It was the exact moment it should have been. But the moment that got me was when she called her mom to tell her, and how emotional she was.  It was such a beautiful thing to see.  It gets me every time just thinking about that.  She turned my life upside down.”

A massive number of fan followers and well-wishers had flocked in to congratulate the groom for the wedding. After dating, Gina and Billy got married on October 1, 2016, in the presence of their family and friends at a beautiful outdoor location. With the most fantastic backdrop view of mountains, the bride and groom exchanged their vows and tied the knot. Billy shared the captured moment of his wedding through his Instagram post.

From the time of his nervousness while seeing the bride till the bridal dance he had eventually shared his each and every captured moment. Billy claims the breathtaking moment to be Gina's appearance in the wedding venue.

After two months of the wedding, the lovely dove couples are still together and have been flaunting their love through their social networking sites by uploading the picture of his wife promoting the Flynn Real Estate Group on the occasion of Christmas.

From the journey of co-actor to girlfriend and wife the couple surely does give a relationship goal for the people around them as well as to their fan followers.As he is married to his girlfriend he is of straight sexual orientation and is not a gay. Now what we are expecting is the proper news from the couple to announce the arrival of Jr.Flynn. May God bless the newlywed pair!

The Owner Of Flynn Estate, How Wealthy Is He?

With the commencement as an actor, Billy Flynn landed in the entertainment industry from the short movie 80 to 10 (2013). However, he was recognized after he got launched in the famous television series of “Days of Our Lives” as Chad DiMera.

Similarly, he is also a part of Flynn Real Estate which has allowed him to accumulate the net worth of $3 million. Flynn is still working in the series and even has undertaken major movie project D.O.A Blood River, for the year 2017 which would be an addition to his present net worth.