By LRU Writer | On: March 26, 2021
The romance radiated by any celebrity in their movies makes millions of fans envious. However, sometimes that same celebrity may not be enjoying a bit of romance in life.  Similar to this, the star of our story today is someone whose onscreen match-up has gained immense popularity, but real life is devoid of relationship.

American actress, Rhea Seehorn is best known for her role as Kim Wexler in the series, Better Call Saul. Starting as a fresh-faced young girl on A Case Against Karen she has come a long way in the industry and has been wowing the audiences for more than two decades.

Her rise in professional career has coincided with her finding the right partner. Not only has her partner helped her in balancing the chords between personal and professional life, but he has also been a constant companion for her on her red tape events.

Rhea has been engaged to a real estate agent, Graham J. Larson since January 2013. She revealed her engagement in an interview with Filler, where she explained about her fiancé and his two children.

Not only has she got a loving partner in her husband-to-be but she also is a proud mother of her fiance's two kids from a previous relationship. She is relishing in the role of a mother and spends quality time with them whether that be in a family holiday or just casual family brunches.

Her social media sites also reflect her happy motherhood, which is full of illustrations of her blissful life with her fiance and kids.

During 2018's spring break, Rhea with her family went on a family vacation to Mexico. Graham was quick to share the glimpse of their family vacation on Instagram in April 2018  where she seemed very close with the two boys. 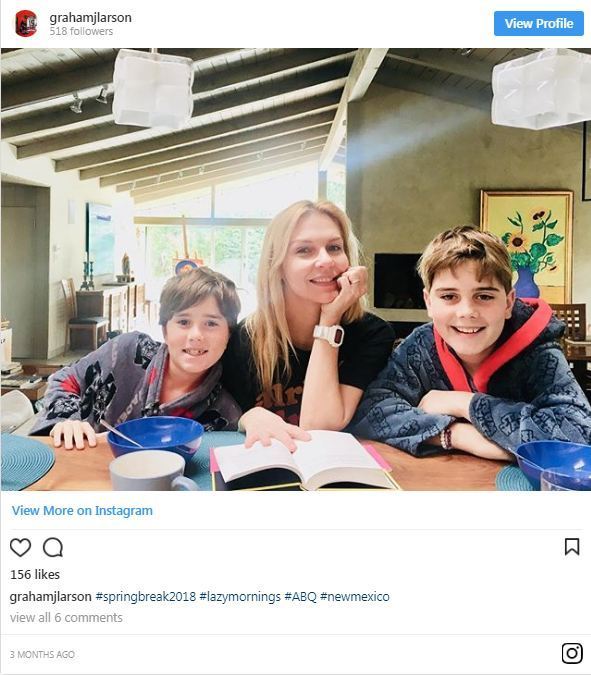 The Breaking Bad actress shares the same birthday month with her fiance.

Graham did not hold back in surprising his wife-to-be on her birthday with an amazing cake and a beautiful message.

The actress overwhelmed by the surprise took to Instagram to thank her husband-to-be and described her birthday cake as the "most amazing" one. She also hinted at her soon to be married life with her fiance in the same post

Didn't have time for a birthday party (yet!), but my fiancé surprised me with one of the most amazing cakes I have ever had!!! Thank you @grahamjlarson & thank you @pieceofcakela for making this dream of berries nestling on clouds of sponge cake & buttercream! â¤ï¸?â¤ï¸ (My awesome bonus boys (soon-to-be stepsons) call me Rhea-Rhea, hence the moniker. In case you were wondering if it was my new rap name.) Rhea equally reciprocates the love and appreciation and it shows in her social media profiles. On 26 March 2019, marking the birthday of her fiance, she posted a happy snap of the two. Her caption hinted at their relationship, which extends more than their romantic bond.

“Oh do I love this guy. Happy Birthday to my best friend & my heart.”

Interestingly, her soon-to-be husband shares his birthday with their cat Milo. In fact, Rhea wished both of them via just one post on their birthday.

“My two birthday boys” is how she scratched the caption. By the end of that, she hinted at something that could lead to their wedding soon. She wrote, when you blow out the candles, the ENTIRE WORLD has a suggestion for your wish, if you wouldn’t mind”. Well, the world has just one suggestion: trade I’Dos!

On the occasion of Valentine’s Day of 2020, Rhea didn’t fail to shower the words of acknowledgments for her stepchildren’s significance in her life. Sharing a lovely photograph of her two stepsons, along with her pet cat named Milo, she wrote

A Few hours earlier on the same day, Rhea had posted an adorable picture of her with her partner Graham. Captioning the picture, she typed, “My one and only. HAPPY VALENTINE’S DAY, EVERYONE!!

Similarly, following her valentine’s day drill, Rhea didn’t miss celebrating her bond with her long-term boyfriend turned betrothed (to get married) through her Instagram post. Uploading a romantic monochrome kissing photograph of the two, rhea described the image by saying “ My forever Valentine.” They celebrated 2021’s valentine as an affianced couple, nevertheless, we still have no clue when they are going to be celebrating it as the man and wife.

Love Is In The Air

The couple seemed to recall their dating days as the year passes on. Graham shared the picture from their second date which is also their first selfie on Instagram in January 2017, wishing her fiancee on their fourth anniversary.

Similar to Graham, Rhea took to Instagram sharing the pictures from one of the first dates and wished her fiance on the fifth anniversary. Well, having already spent five springs with each other, the couple looks ready to get married. And if next year brings about the tag of 'married with a husband' in her bio, then there is nothing to get surprised about.

From Studying Arts To Hollywood Via Theatre

American actress Rhea Seehorn was born on May 12, 1972, in Norfolk, Virginia to the family of the artist. The young Rhea walked in the footsteps of her father and grandmother and studied painting, drawing, and architecture from a young age.

Though she studied the arts, she had a growing passion for film and theatre and later enrolled in contemporary theatre in college. She graduated from George Mason University in 1994 with a Bachelor of Arts in Art Studio.

When she was in college, her father passed away,  leaving her with the message that she must do everything she wants to do in this life. Taking his advice, Rhea signed up for the acting classes and has never looked back.

And her father's last message worked as an ultimate source of inspiration for Rhea. She started her journey to the entertainment industry and had earned a place since 1998 with the movie A Case Against Karen.

Having contributed more than two decades of her life in Hollywood and been a part of numerous successful movies over time, it is no surprise that she is one of the wealthiest actors today. Despite having the exact figures confined, her net worth could easily be in seven figures.