By LRU Writer | On: March 02, 2021
Every man desires to be successful and keep his family contented. But not everyone will be able to fulfill such standard. Unlike those people, today we are talking about a comedian and journalist who seems to be keeping his wife and children happy.

Every man desires to be successful and keep his family contented. But not everyone will be able to fulfill such standard. Unlike those people, today we are talking about a comedian and journalist who seems to be keeping his wife and children happy.

Married to An Opera Singer as Wife:

The Adam Hills Tonight host, Adam Hills, married Ali Mc Gregor, an Australian soprano singer, on December 29, 2002.  The couple conducted a simple wedding inviting family and close friends at a private house outside of Melbourne. The bride wore a beautifully designed vintage chiffon gown which was embellished with Swarovski crystals.

The couple never talked about their marriage unless they were spotted wearing wedding bands in January 2003. The lovely couple, Adam, and Ali has been blessed with two children. Their elder daughter Beatrice Pearl, who is 7 years old now, was born in 2010 in the Melbourne hospital. Adam had revealed about Beatrice’s birth on Twitter. He said, "When I woke up yesterday I wasn't a dad. Today I am. Life is good. Wife is better. Baby is the best."

Similarly, their younger daughter, Maisie Grace, stepped into the world in November 2013. Following her birth, he posted a hilarious picture, where he is seen catching a diaper with a caption stating that he is encouraging other daddies to change their babies’ dirty diaper. The couple is very conscious about the upbringing of their daughters. Adam claims that they often take the daughters on holiday tours. Ali mostly takes the responsibility of children when they have to visit somewhere.

Adam explained about the family’s flying experience in an interview with The Sydney Morning Herald in 2015. He said,

"My wife is amazing. She's been flying with them for years. My five-year-old has gold frequent flyer status. My youngest is two and gets her own seat and the hardest part is explaining, "No, when that seat light comes on you have to stay there with your belt clicked." Turbulence is a very big word for a two-year-old."

The responsible father Adam is assured that he is giving good teaching to his children. He has shared about the things parent need to be concerned while raising the child in an interview. He said, "The best lesson a parent can take is staying open to the moment and try not to let anything phase you. You'd think after all the drunken Scottish hecklers I've dealt with at two o'clock in the morning I'd be able to handle a five-year-old." 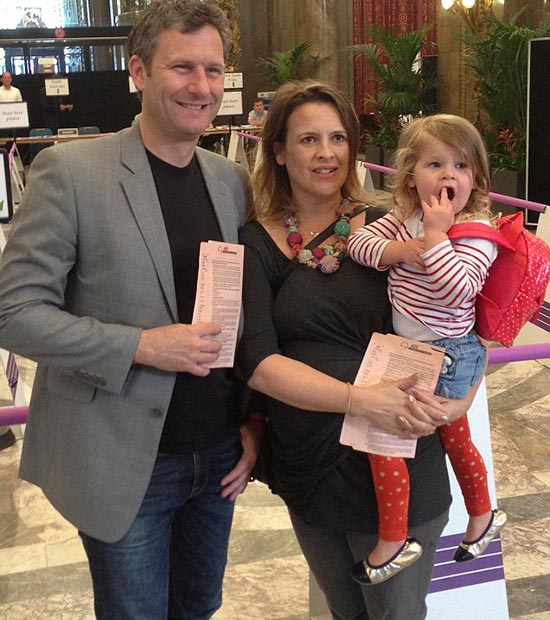 Belonging to Australian Nationality, Adam Hills was born on July 10, 1970, in Sydney. Adam wears a prosthesis as he does not have a right foot, which is also an issue of comedy in his shows. He graduated in Bachelor in communication from Macquarie University. He is best known for hosting the shows like Spicks and Specks, Adam Hills Tonight and The Last Leg, which has made him a renowned television presenter in Australia and Britain.

Caption: Adam was performing comedy on Melbourne International Festival in 2010.

He started performing as a comedian from the age of 19. Till now, he has also experienced numerous solo shows touring many countries. Adam’s comedy genres are Social Satire and observational comedy. He is influenced by Chris Addison, Greg Fleet, Rich Hall, Daniel Kitson, Ross Noble and David O'Doherty. He has earned several nominations and awards such as the Most Popular Presenter award in 2012.