Apart from his successful career in acting, Alan has garnered limelight because of his personal life. The 46-year-old actor had been involved in multiple affairs in the past that didn't end well.

However, in the recent days, he has been involved with a new found lover and looks like they are a perfect match as they involve in different activities together.

Let's find out the personal life of Alan along with his bio-like details!

Alan was in a relationship with actress-choreographer Sarah Robichaud in the early 2000s. The actor even has a son, Logan Joseph born on 1st August 2002, with his former partner. However, the Alberta-born broke up with her somewhere before 2006 as he was already dating another woman by that year.

In 2006, he developed a romantic relationship with actress Sarah Jarvis. After the romance nurtured, the couple started living together along with Logan and Sarah's daughter Talya. The family shared time together and indulge in different hobbies.

For instance, the couple took their kids to a park daily where the four could have their private family moments.

Logan, who was growing like a weed, had become a handsome young man. On 13 November 2015, Alan shared a picture along with Logan supporting the Canadian basketball team, Toronto Raptors. Not only a beautiful teenager, Logan who is 15 has also been fulfilling his duties as a responsible son to his mother. On 23 February 2018, Alan wrote in a tweet that Logan had been raising funds for his mother's charitable organization Dancing with Parkinson’s that helps the victims of the Parkinson's disease.

Present Girlfriend Or Is She His Wife?

Alan is dating Gabriella de la Torre, a writer, known for her work on How To Fall (2017). Although the actual date of the start of their relationship is not disclosed, the affair came to light after Alan shared a post this year.

On 4 February 2018, the Survival of the Dead actor shared a post on his Instagram in which he mentioned a pre-Valentine's gift, an espresso machine; he got from his sweetheart, Gabriella.

Moreover, on 27 March, Alan attended the CBS' Price Is Right with his girlfriend and also enjoyed a lovely dinner on the pier. The 6'1" tall actor posted a picture of the couple on Instagram. 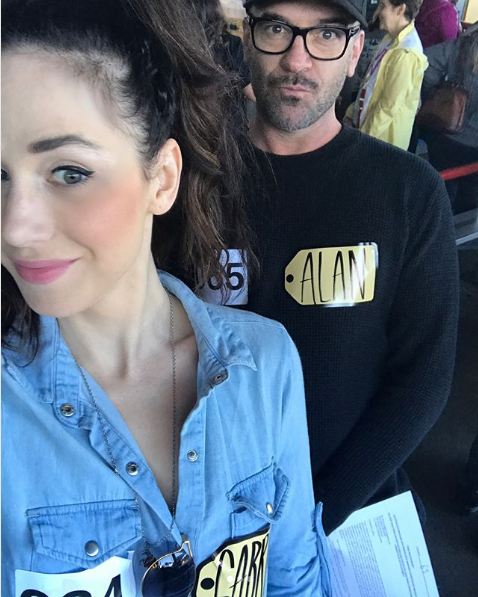 On 25 May 2018, Alan along with his partner attended the opening night of the stage season at Budweiser Stage.

The couple is taking one step at a time in their relationship and has not yet tied the knot. However, looking at their successful love life, the pair seems to be on the verge of getting married.