Algee Smith Has a Girlfriend? His Dating Status Now

By LRU Writer | On: January 28, 2018
Algee Smith Has a Girlfriend? His Dating Status Now As far as the celebrity relationships go, some flaunt their relationships while some are way good at keeping their relationship a mystery. But for American actor Algee Smith, who is best known as Ralph Tresvant on "The New Edition Story," there is a different story. Wondering what we're depicting to? 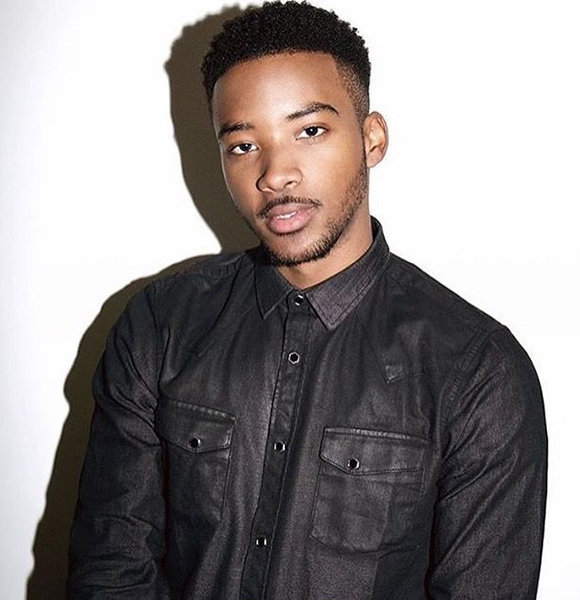 But for American actor Algee Smith, who is best known as Ralph Tresvant on "The New Edition Story," there is a different story. Wondering what we're depicting to?

Algee Smith and His Dating Status!

Algee Smith, who is best known to Disney fans as Da Boss, has been successful in making his fans wonder about his love life; he seems occupied with building up his career as he remains hush-hush about his relationship and dating affairs.

In an interview with A_RONTV on YouTube back in August of 2017, Algee was asked  if he is single or dating, to which he replied:

In the same interview, Algee also opened about Regina Hall as the female celebrity he looks up to and admires. Regina, best known as Brenda Meeks in the 'Scary Movie' film series, is working with Algee in the movie "The Hate U Give" which is still in the filming process.

Caption: Algee Smith reveals of his relationship status on A_RONTV. (published on August 30, 2017)

As far as the quality Algee seeks, he looks for spirituality in a woman, i.e. who cares, listens and be there for him. As Algee spoke with BET Networks back in January 2017, he divulged,

"After a long day in a studio or on set, sometimes I just want to chill.... so I just go to the phone and whine down to u."

23-years-old Algee also revealed that he loves to eat and wants his girl to be able to cook for him and be his best friend. In the same interview, he even shared what he notices in a woman. He gushed,

"One of the first things I notice on the women is her shoes... the way you keep ur shoes tells a lot about a woman. Amother thing is her eyes...I love looking into woman's eyes, the way she keeps herself up...how her make up is done...how her hair is done....her nail is done...."

Algee, when asked about his biggest turn off while dating, replied,

"probably clingliness....I just dont like when girls dont understnd that......It's not that I'm not hitting on you because I don't want to but because I am really doing other things...."

Caption: Algee sharing his thoughts on relationships and the qualities he looks for in a woman with BET Networks. (published on 11 January 2017)

Probably his past relationship wasn't all rainbows, so he wants to focus on his career while keeping a name for himself in the single zone!

However, back on September 25, 2010, when Algee was in his teens, he shared a tweet expressing his desire to have a Twitter girlfriend.

Even though Algee fancied of having a girlfriend back then, he hasn't come forth with any romantic relationship that he has been in, so his relationship status remains a mystery to his fans.

Born on November 7, 1994, Algee Smith is an entrepreneur, actor, and an artist. He recorded his first rap song when he was 9 and at the age of 16, he was offered to take part in Radio Disney's Next Big Thing competition.

Despite the opportunities, Algee released his first debut "She Say" on 2013. Moreover, Algee, as an actor, first portrayed Spencer on "How To Rock" Television Series in 2012. He even played Larry Reed on one of his hit movie "Detroit."

Furthermore, Algee, who is an entrepreneur, is working to sharpen, build and excel in his multifaceted company, 7 Scope Entertainment as well.