Anthony Pettis in a Perfect Dating Affair! Only Love Between Him and Girlfriend

By LRU Writer | On: December 31, 2017
Anthony Pettis in a Perfect Dating Affair! Only Love Between Him and Girlfriend UFC Lightweight Champion Anthony Pettis has an illustrious career with a professional fight record of twenty wins, zero draws, and seven losses. Being one of the talented and attractive mixed martial artists, Anthony has a large number of fans who are very curious to know about his personal life and relationship status. 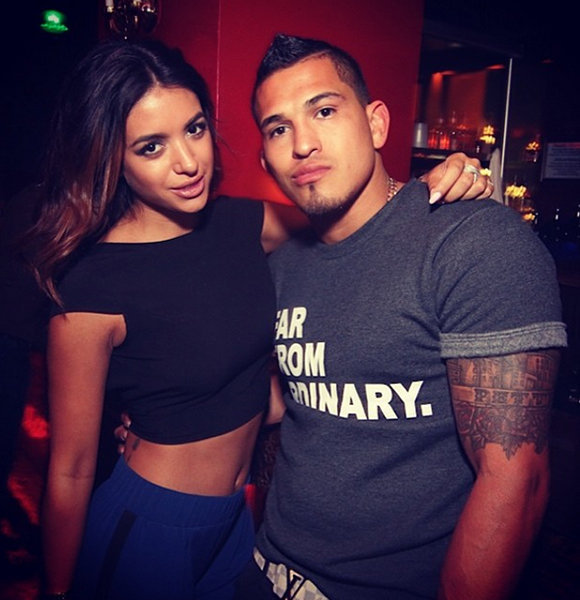 Being one of the talented and attractive mixed martial artists, Anthony has a large number of fans who are very curious to know about his personal life and relationship status.

In this regard, Anthony might break many hearts with his perfect dating affair with his beautiful girlfriend. Let's dig in to witness the lovely couple.

You might have seen Anthony on your television screen many times, but you might not know about his dating affair, which is as impressive as his matches.

Well, Anthony is openly dating Lisette Gadzuric, the ex-wife of the basketball player, Daniel Gadzuric. The duo flaunts their romantic relationship on social media platforms which gives an insight into their beautiful relationship.

The couple has been sharing their pictures for a long time, but it is not clear how long they have been together. On the occasion of Valentine’s Day 2017, Lisette shared a picture with her man explaining that he makes every day feel like a holiday.

Furthermore, she thanked him for making her feel beautiful, strong, smart and so loved every day.

The pair doesn’t miss any chance to flaunt their Relationship on social media. They keep their followers updated by sharing their pictures from their dinner dates and romantic vacations.

By the looks of it, the adorable pair Anthony and Lisette share an incredible bond with each other. But this is not the first relationship to both of them. Like Lisette, Anthony is said to be married to Alexandra Cartagena in the past, but the fact about his marriage is very bemusing.

Some people believe that Anthony and Alexandra were married while some states that Alexandra was Anthony’s girlfriend. Regardless of the nature of their relationship, the pair shares a cute little daughter named Aria Pettis born July 9, 2011.

Well, Anthony not just flaunts his love with Lisette, but also shares different pictures of his princess daughter on social media.

The thirty-year-old Anthony Pettis is ranked #13 in the official UFC lightweight rankings, which happens to be the result of his hard work from his childhood.

He was raised with brothers Ray Pettis and Sergio Pettis- a mixed martial artist who competes in the Flyweight division of UFC. Anthony started training boxing and taekwondo at the age of 5. Anthony, who already had a 3rd-degree black belt in taekwondo by the age of eighteen, began his MMA career in December 2007.

Active as MMA for ten years,  Anthony recently fought at UFC Fight Night 120 where he faced Dustin Poirier on November 11, 2017.

Due to a broken rib, Anthony lost the fight after tapping out in the third round. Well, there are no any updates on Anthony’s next fight.