By LRU Writer | On: May 27, 2019
Ashley Wirkus might just be the happiest woman at the moment...Apart from a successful married life, the reality star has now a family of three to boast...The Summer House alum and her husband of three years are more than happy to welcome their first time together... 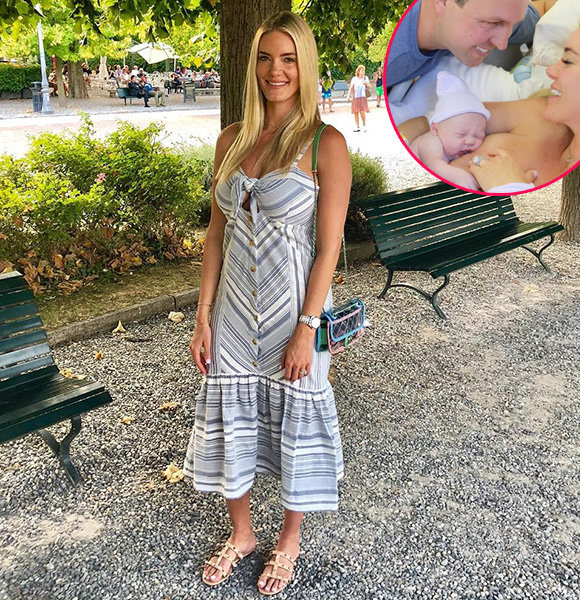 The Summer House alum Ashley Wirkus and husband Brad McAtee welcomed their first child together, a baby boy named Dean Hudson McAtee on 24 May 2019. At the time of birth, her baby weighed 3.8 kgs while stretching nearly 20.5 inches in length.

The delivery took place in Encinitas, California at 9:53 in the morning. Her loved ones surrounded Ashley during the childbirth; her husband, three sisters, and mother, Dana supported her during the labor. The couple had first announced the pregnancy on 12 November 2018 with a sonographic image of their child.

In March 2019, Ashley had her baby shower where 70 of her close friends and relatives were present.

Despite being 38 weeks pregnant earlier in May 2019, the couple was undecided on the child's name. They probably settled with the name, Dean Hudson McAtee in the last hours.

Now, the happiest mother, Ashley boasts a family-of-three with her husband of three years.

Ashley and husband Brad McAtee got married on 21 November 2015, nearly a year after their engagement. Brad is a district manager at the Tactile Medical based in San Diego.

The wedding between the two took place in CaboSanLucas, Mexico, where the bride and groom's loved ones were present to witness the vows.

The couple's third anniversary came a few days after Ashley's announcement of being pregnant. The reality alum shared a throwback picture of her wedding for the occasion to showcase her love towards the husband. Ashley shares a throwback picture from her wedding for her third anniversary on 21 November 2018 (Photo: Ashley Wirkus' Instagram)

Now, added with the responsibility of raising a child, Ashley and husband Brad are bound to make some sacrifices with both their personal and professional.

30-year-old Ashley is a Californian native. She started her career working as a real estate agent. Later in 2017, she got her breakthrough on TV with the hit Bravo series, Summer House.

After her initial success in the reality TV business, Ashley tried her luck in other fields too.

She, along with her sister, runs a fashion blog titled Two of a Kind, where the siblings give tips to readers on travel, beauty, health, and fashion. Further, she owns a clothing retail company named Uptown Cheapskate, which has helped in adding her net worth.