By LRU Writer | On: February 28, 2018
Joy Anna Duggar’s Husband Austin Forsyth, 24, Facts: Family, Job To Net Worth. The Duggar's family has lived most of their lives as open books, but the same is not necessarily true for their spouses. Similar is the case with an American TV personality Joy-Anna Duggar's husband, Austin Forsyth who is now enjoying parenthood with her. 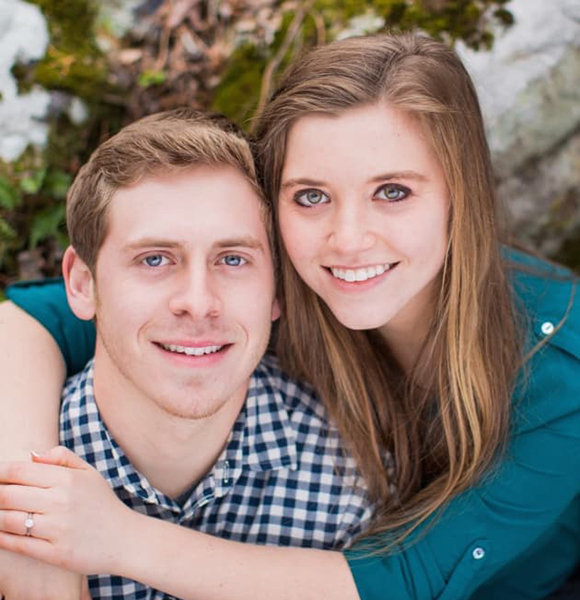 The Duggar's family has lived most of their lives as open books, but the same is not necessarily true for their spouses. Just take an example of American TV personality Joy-Anna Duggar's husband, Austin Forsyth, who is now enjoying parenthood with her.

The pair who tied the knot back in May 2017 after three months of engagement and welcomed a son named Gideon Martyn Forsyth on Feb 23.

As the couple has embarked on the newest chapter of their life together, many things about famous Duggar's Son-in-Law, Austin Forsyth has become a matter of curiosity for their fans.

So, here we present you some facts about Joy-Anna Duggar's Husband Austin Forsyth!

1. Austin Forsyth Has Been Friends with Joy-Anna for 15 years:

The couple has known each other since they were kids themselves. To be precise, it has almost been 15 years. They have seen each other grow and has been together from their childhood. However, Joy later confronted that, she has no memory of Austin as a child. Austin took Joy to a nearby forest for the courtship proposal which was also featured in the Counting On's episode, "A Honeymoon & a Courtship."

When Austin was small, his parents, Terry and Roxanne Forsyth opened a Christian Camp called "Fort Rock Family Camp." He used to help his parents on the farm.

Just like the Duggars, Austin's family has a rule that the kids should wear modest clothing and take a vow not to have sex before marriage. And they should save the first kiss for their wedding day. Other rules include waking up early in the morning to work in the family camp, and as a teen, they should not close the bedroom doors.

4. Austin Is A Pilot By Profession

Well, after being a father to a healthy baby boy, everyone was wondering, what he does for his living. But the job of The Counting On star was revealed when he was gliding on their honeymoon in Switzerland.

As it remains known now, he is professionally a full-time Pilot.

5. He Has Reality TV Past

The Forsyth family was a host family on Season 1 of the Country Music Television's reality TV show, "World's Strictest Parents," in 2009. Well, as he is the member of the Duggar's Family, he has also appeared in the TLC's Counting On.

Austin might earn as much as $ 35,000 per season, depending on how much screen time he gets. So with this income, he might enjoy a good net worth the figure of which has been kept private until now.