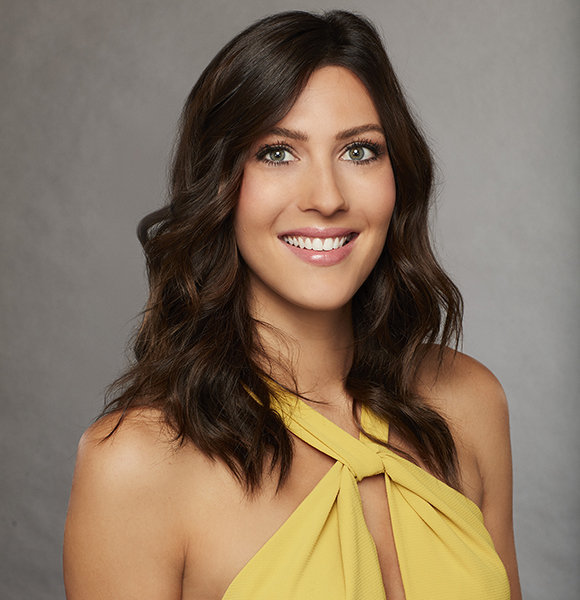 And talking about the show, you probably must have seen the contestant Becca Kufrin in the season 22 of 'The Bachelor.' Undoubtedly, you have seen her a number of times on the show but how much do you know about her behind the camera?

So today, we will shed some light on Becca's personal life details.

Becca Kurfin, who is one of the contestant's of 'The Bachelor' got the privilege to be the first girl to go on a solo date with American auto racing driver Arie Luyendyk Jr.

And according to Reality Steve, Becca is engaged to Arie, but the couple had some accidental spoilers on social media. For instance, they both posted pictures of themselves individually lounging in the same pool.

Not just that, in the program, even her ex-boyfriend, Ross Jirgl, a former Minnesota State football player, showed up and wanted her back. He then went on to propose Becca.

It is not clear whether Becca and Arie will get married or not. However, in an interview with Extra TV, he shared his thought why it was difficult for him to make the big decision. Have a look what he has to say:

I am happy, but I did fall in love with two women … it was very difficult. The whole time I was thinking more about what comes next, life outside of this, how this person fit with my life at home, would my friends and family like her. You have to think more logically and that is so hard because there is so much emotion involved. It really comes down to who’s a best fit and it’s a two-way street.

Likewise, on the other side, Becca shared some post on her Instagram which hinted that she probably is single. However, it is ironic to see when the supposed winner of the show post content that she is lonely and heartbroken.

Becca Kurfin was born on 3rd April 1990 in Prior Lake, Minnesota. According to her Instagram post, her father died in 2009 from brain cancer when she was nineteen years old. Becca has a sister named Emily.

In 2008, She graduated from Prior Lake High School in Prior Lake, Minnesota. Becca, later on, earned a B.S in mass communications from Minnesota State University, Mankato in 2012.

According to her LinkedIn profile, she is a Senior Account Executive at Skyya Communication website, a public relations agency in Minneapolis. Likewise, she can't live without five things including chapstick, facial lotion, bobby pins, popcorn, and stamps.

Becca is quite politically engaged as she has posted about voting for Hillary Clinton and participating in the Women's March. She also has pets, a corgi, and a cat. She has posted lots of adorable pictures of her pets on social networking sites calling the relation 'unconditional love.'

Becca also shared that she has three best attributes including loyalty, honesty, and charismatic which are all essential characteristics of being a great publicist.