By LRU Writer | On: March 25, 2018
Bella Dayne Dating To Get Married? Meet Real-Life Boyfriend From Reel-Life While most people keep the code and try finding a suitable partner outside their jobs, however, for Bella Dayne, the opposite seems to be working out. The German actress is currently portraying the role of  Helen, the queen of Sparta in the BBC's Troy: Fall Of A City and it looks like she has developed a romantic relationship on the sets of the show. 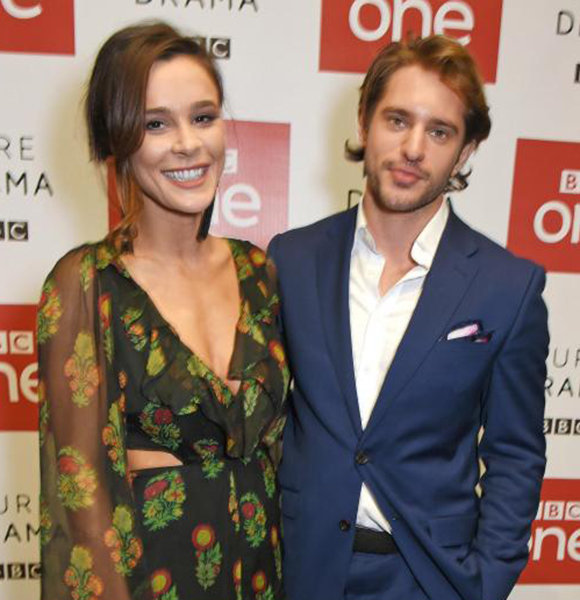 Relationships at the workplace are not considered as an appropriate choice for any individual. Although it might be suitable initially for a couple as they get more time to spend with each other, although in the long term the love gradually starts degrading due to factors like competition and ego.

While most people keep the code and try finding a suitable partner outside their jobs, however, for Bella Dayne, the opposite seems to be working out. The German actress is currently portraying the role of  Helen, the queen of Sparta in the BBC's Troy: Fall Of A City and it looks like she has developed a romantic relationship on the sets of the show.

So, who's the guy that has won the heart of Helen, the most beautiful woman in the world? Let's find out!

Bella, 28, has been romantically involved with her co-star Louis Hunter, 25, who plays the role of her lover Paris in the show. The couple first met on the sets of the Troy: Fall Of A City and started dating soon. The viewers appreciated the duo's chemistry on the show, and the two even shared some passionate lovemaking in front of the camera. Moreover, their love affair was an open secret among the cast and crew of the show, but their love affair was only disclosed after a member of the show leaked their secret to the media.

The insider revealed to The Sun,

“It was pretty obvious there was a passionate spark growing between the two of them - you could just tell by the way they looked at each other."

“There are quite a lot of very intimate sex scenes, and it would have been difficult not to have felt something. Not surprisingly, they didn’t look like they were having to do much acting.” Bella and Louis on the sets of Troy (Photo: Ok.co.uk)

According to reports, the Australian actor famous of his roles on American TV shows The Secret Circle and The Fosters joined Bella on her trip to Berlin and has even confessed his love for Bella on Instagram. Bella is managing his time between her home in London and Louis's residence in Los Angeles.

However, Bella and her boyfriend Louis have not made any statement regarding their alleged relationship. Their love on-screen may be considered illegitimate by some people, as her character Helen is a married woman with a husband and a daughter, but in real life, the duo has no reason to hide from any bystanders.

The fans of the couple will have to wait to see if their spark of the moment fades away with the end of the show or they will take their love to the next level by tying the knot and starting a family.

Bella Dayne was born to her parents on 8 January 1988 in Berlin, Germany. She embarked her journey in the film industry with her debut role in the movie "Thank You, New York," in 2009. For her first role in Tv, she appeared in the series How to Be a Gentleman's episode "How to Get Along with Your Boss's New Girlfriend" in 2012.

Bella, who became famous for her acting in Plebs and Humans has also performed in other shows like American Horror Story, The Goldbergs, Person of Interest, The Man in the High Castle and Guerrilla to name a few.