By LRU Writer | On: October 17, 2019
On 2nd May 2019, Gossip Girl alum Blake Lively stepped out to support her husband Ryan Reynolds at his film, Pokémon: Detective Pikachu's premiere at the New York City...Other than looking gorgeous as usual, the pretty blonde was rocking a baby bump! 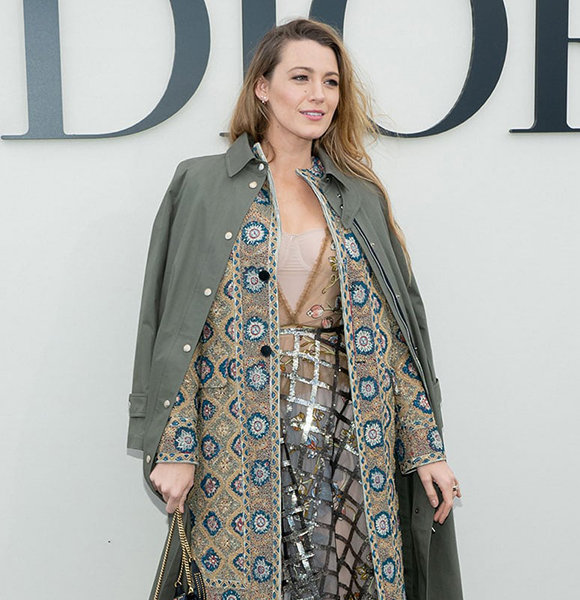 On 2nd May 2019, Gossip Girl alum Blake Lively stepped out to support her husband Ryan Reynolds at his film, Pokémon: Detective Pikachu's premiere at the New York City. Other than looking gorgeous as usual, the pretty blonde was rocking a baby bump! Yes, the talented A-lister was pregnant with her third child and was set to welcome the baby with her Deadpool star husband.

It was confirmed on 4 October 2019 that the couple had welcomed their third child. However, no details were released at the time.

Almost two weeks later, on 16 October 2019, good news surfaced when Blake Lively and husband Ryan Reynolds revealed that the duo had welcomed the 5th member of the family.

Well, it was actually her hubby Ryan who confirmed the arrival and gender of the baby. In a photo, the two parents could be seen snuggling with their bundle of joy. However, just like their previous children, the baby's picture was blurred and replaced by a smiley face. Even their other two children were photographed only once and that also with their parent's consent. However, the photo of the third child and the caption had it all. A small portion of it read,

Through the tweet, it was quite clear that he had welcomed a third baby girl. However, the parents have yet to out the name of their children through official channels. As of October 2019, Blake and Ryan are cherishing life with baby no 3.

Other than their newborn, the pair is also proud parents to more kids named James and Enez.

The Sisterhood of the Traveling Pants star’s love story is straight out of Hollywood rom-com.

Blake met The Proposal actor on the set of the movie Green Lantern in 2010. At the time, both the good looking actors were involved with other people. While she was in a relationship with her Gossip Girl co-star Penn Badgley, Ryan was married to Avengers star Scarlett Johansson.

Later that year - after relationships of both the stars ended - rumors started going rounds about the newly single stars getting cozy in summer 2011. Things went fast from there; Blake tied the knot with her man in September 2012 in an intimate wedding ceremony held at Boone Hall Plantation in Mount Pleasant.

Fans consider the pair to be the ultimate power couple of Hollywood. Their fun relationship of roasting each other on Instagram cemented their status of being the most favorite couple ever.

Blake revealed the reason behind their strong relationship in spite of being a high-profile celebrity in Hollywood. Well, she and her man were close friends for two years before they started going out; thus their friendship and honest communication kept their relationship stronger than ever.

Blake’s career has never faltered since she was a high schooler, i.e., after her break-out role in The Sisterhood of the Traveling Pants back in 2005. After the show, she went on to star in CW's teen drama series Gossip Girl, which became a cult hit and established her as the A-lister in Hollywood.

The actress, who stands at the height of 5 feet 10 inches (1.78 m), has performed in various memorable projects including Private Lives of Pippa Lee, The Town, Accepted and Savages.

For You:- Tamia Hill Net Worth, Ethnicity, Husband

Due to her roles and fashionable appearances on red carpets, she is considered the ultimate fashion icon; people literally go gaga over her looks and hair duos.

No wonder, the talented star was featured in the annual TIME magazine's 100 Influential People in 2011. Similarly, AskMen.com named her The Most Desirable Woman in the same year. In the list of honors, she was named People’s Most Beautiful at Every Age in 2012.

Courtesy of her high profile Hollywood career, she boasts a net worth of $16 million. Combined with her husband, the married duo share a total of $91 million in net worth.