By LRU Writer | On: August 09, 2016
The regular morning viewers of the BBC must be wondering what happened to the former main morning presenter for BBC News On Tuesdays-Fridays (alongside Simon McCoy), Carrie Gracie. She was once absent from BBC for a long time. Know the reason for her absence and also her personal life. 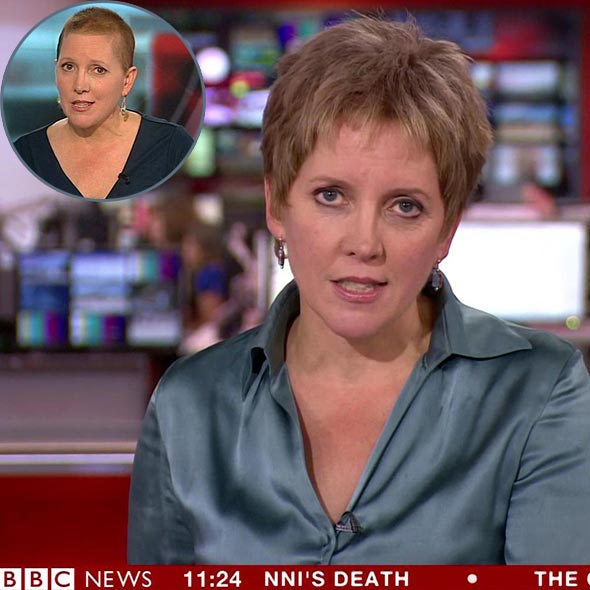 The regular morning viewers of the BBC must be wondering what happened to the former main morning presenter for BBC News On Tuesdays-Fridays (alongside Simon McCoy), Carrie Gracie. She was once absent from BBC for a long time. Know the reason for her absence and also her personal life.

She joined BBC in 1987 as a trainee producer because of which she had to travel around the world. After being the correspondent for the domestic radio and television of Beijing in 1991, she returned to the UK and had been the co-presenter of BBC news ever since except an eight-month-long absence in between.

You might have seen the telecast of her return in BBC on 17th may 2012 after nearly an eight months long interval. The reason for her absence was her illness; no I am not talking about a simple migraine. Carrie had taken time off to treat her cancer. This is the reason that she returned with a trimmed haircut.

Many viewers must be surprised to know this fact. You see, Carrie was very discreet about her illness, and not many people knew about it. Even after the new broke through, no clear, detailed information was given on her condition. It must have been hard for Carrie to keep such a life-altering secret from the world. This gives us the idea of how courageous and brave-hearted the BBC co-host is.

Later, it was known that she was diagnosed with breast cancer. But even after such a hard struggle with cancer, she has barely spoken a word about it. The might either be because it was a painful memory that she doesn’t linger on or a casual common thing for her that that already tiptoed lass. Either way, her silence is also heroic in a way.

She was passed on with some great words from her colleagues. Her co-host, Steve McCoy couldn’t be any happier to reunite with his partner as he said, “Marvellous to see Carrie looking so well and on such top form.” He also added, “She is indeed an inspiration. A brave lady indeed. To do what she is doing today takes true guts.”

Many fans also rendered their message through McCoy; 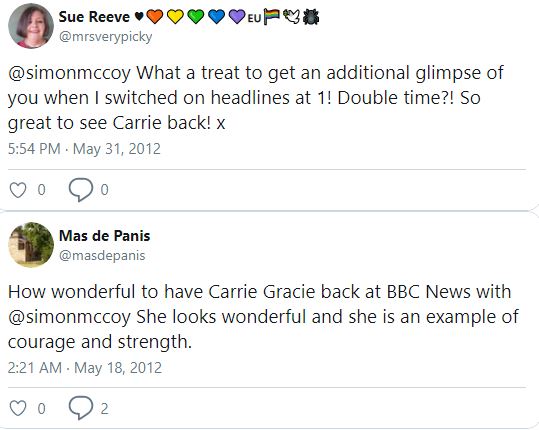 He also replied to all of them with the following tweet.

She has not entirely left BBC as she works for the BBC in China. She has not only established her professional life there but also his personal life. An article in “The Guardian’ said she has an Ex-husband who is a drummer of a Chinese Rock band, and she is a mother of two daughters.

It was also said in the article that she would be taking the summer of 2016 off to help her daughters prepare for their A-level education. According to her biography in ‘news.bbc.co.uk’ written off 1998, her first daughter was born on 1996, and she was expecting her second one in 1998. So, her daughters must be close to 18 and 20 years of age.

Carrie Gracie was born on 1962 in England. She attended the University of Edinburgh for a while until she left for a year to start her own restaurant. Later she graduated in Politics, Philosophy and Economics from the University of Oxford.

She is currently the BBC News's first editor for China and has been ever since she was appointed in December 2013. Her recent story has been published on July 31, 2016, about ‘Hinkley Point: Theresa May's China calculus’.