By LRU Writer | On: August 05, 2018
One of the famous non-celebrity, Caroline Boyer has been garnering fame as the wife of the famous country music singer Luke Bryan. The red-hot couple has been the country music royalty for years as they are the relationship goals in today's world of break-ups and make-ups. Not only have they been there for each other in every step of their life, but also has a family of their own to look after now. 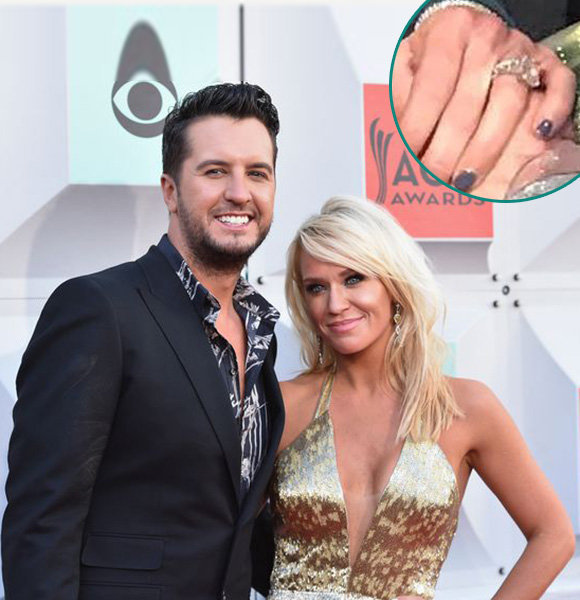 The red-hot couple has been the country music royalty for years as they are the relationship goals in today's world of break-ups and make-ups. Not only have they been there for each other in every step of their life, but also has a family of their own to look after now.

Here are the insights on wiki-like-bio of the wife of the high-profile country music singer.

Caroline and Luke love story goes back to days when they both were an attendant at Georgia Southern University in 1998. The couple first at a little bar called Dingus Magee which is located in Statesboro, Georgia and has been strong ever since.

Caroline has been sharing the romance with her college sweetheart, Luke for more than a decade.

However, while they were in college, the pair broke off their relationship as Luke moved to Nashville to start his career and Caroline stayed to finish her degree. But, the couple eventually came back together after being apart for five-and-a-half years.

Their fate again met when Luke was playing at a bar in Statesboro and Caroline was in the town. they both were catching up and Caroline invited him her family's Christmas party which ultimately sparked their lost romance. Caroline Boyer with a husband of more than a decade Luke Bryan. (Photo: hollywoodlife.com)

Since then the couple has been going strong with their romance. Years after being together, Luke finally gathered up the courage and got down on one knee. He popped the question to his long-time love in front of the Nashville Parthenon. Luke had planned the proposal after a dinner date which caught Caroline by surprise.

Later in December 2006, the couple exchanged their wedding vows. After 10 years of being married, Luke had a special gift for his wife on the special occasion. He presented his wife with an upgraded wedding ring as their anniversary gift stating that it is the least he could do for her.

In 2017, the couple had their 11 years of the anniversary in which Carolina, who has a net worth of $7 million, shared a video of pictures relating their past memories.

Well, the couple is still going strong with their married life and a family of their own.

Caroline Boyer, who celebrates her birthday every year on 31 December, is not only a loving wife but is also a full-time mom. She shares two kids, Bo and Tate, with her husband Luke along with Luke's nephew Til and nieces Kris and Jordan who are the children of Luke's sister Kelly.

The couple decided to take in the kids after their parents had the tragic death. As of now, Caroline and Luke look after five kids as their own. Luke runs around fulfilling his dream whereas Caroline stay home being a full-time mom and looks after the kids.

Caroline, who is at the age of 38, is constantly on the go and cleaning. Her current main focus is her kids and her husband with no aspirations for anything else in the industry.