Who Is Chad Johnson? Bent A Knee, Engaged To Michelle Williams At Age 40

By LRU Writer | On: April 23, 2018
American pastor Chad Johnson may not be a well-known name in the entertainment world, but he made media headlines due to his high-profile dating life. Also the religious leader, Chad is dating the famous singer, Michelle Williams. Not only dating Chad has also got engaged to Michelle successfully and now, proceeding towards getting married in near future. Well, the religious leader's proposal story is sweeter than honey, which is a treat for many romantic hearts. 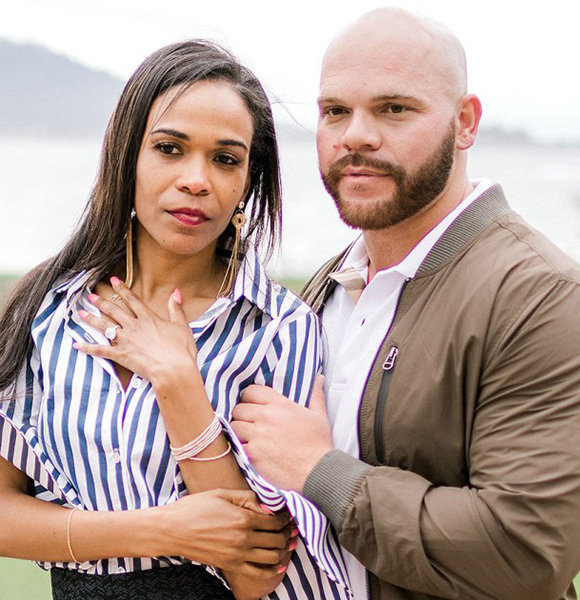 American pastor Chad Johnson may not be a well-known name in the entertainment world, but he made media headlines due to his high-profile dating life. Also the religious leader, Chad is dating the famous singer, Michelle Williams. Not only dating, but Chad also got engaged to Michelle and now, is proceeding towards getting married in near future.

Well, the religious leader's proposal story is sweeter than honey, which is a treat for many romantic hearts.

If you want to grasp the sweetness of Chad's love-life, why don't you make your hands dirty reading down below!

Michelle had recently ended her relationship after she found out via social media that her ex-boyfriend cheated her at the time. Talking on the show, The Real Daytime on March 2017, she stated,

"I was in a horrible, dark place. I just needed to go somewhere where I could get a message of hope and restoration, rejuvenation — get connected to God.”

The duo then-sparked a conversation, which soon turned to social media and text messages. The couple, who had not met each other for three months since their first meeting, began to connect virtually via frequent late-night FaceTime calls and inbuilt a strong intimacy through phones and facetime.

The pair soon blossomed their love-life, which was confirmed after they went to their first actual date at a wedding in the Dominican Republic in July 2017. They shared their first kiss on that date and led their relationship a step ahead.

While speaking to PEOPLE in April 2018, Chad affirmed the situation when he met her soulmate for the first time.

“When we met, both of us were in very similar places on a personal level. Michelle was coming off the heels of a really bad relationship, and I was just in a place of despair as well.”

Following a year of dating, Chad made his mind to propose his girlfriend and secretly traveled to Michelle's hometown- Rockford, Illinois in February 2018 to involve Michelle's parents. He made a whole video of his trip.

A month later, Chad took Michelle to the Pebble Beach, California hotel on 21 March 2018, where he recreated their first meeting moment and gave the video. Michelle's boyfriend-turned-fiance later affirmed with PEOPLE in April 2018. He stated,

“We were replaying the whole text message, recreating the moment. I was like, ‘Hey, what about if you and me connected?’ She sent me back a text saying, ‘I’ll check my availability.’ And I signaled over to the waiter, and she brought out the iPad and played the video of me being on the proposal tour.”

Michelle was taken aback by the video and soon knew about the proposal. Recollecting the memories, she talked to PEOPLE and stated,

“I started weeping and wailing when I see all these special people. Towards the end of the video, something in my head said, ‘Pull yourself together! He’s about to propose! Stop all this crying!'”

Chad soon dropped down on his one knee and proposed his girlfriend with tunning 5-carat rock bought from L.A. jeweler Denis Mahgerefteh. They came up with the happy news on April 2018 through Instagram and Chad was one to share the picture. The couple soon got engaged in March 2018 and announced their plan to get married in 2018's summer. Speaking to PEOPLE a month after their engagement, Michelle affirmed,

“The day after we got engaged, Chad was like, ‘Okay, we gotta pick the wedding date! We gotta do all this stuff! We do wanna get married very, very soon. We’ve been moving very quickly and planning. Why wait? I want to get married now, but he wants a wedding!”

40-years-old Chad has also planned to shift from Arizona to Los Angeles, California to be with Michelle after marriage.

Religion leader Chad Johnson is a Christian minister and a founder of Elevate International, a nonprofit organization serving in mentoring at-risk youths in urban areas. He was involved with the Elevate International since 2006. Besides, Chad is also a professional athlete and serves as a chaplain for the Arizona Cardinals, Pittsburgh Steelers, and Los Angeles Dodgers.

Chad was born in Colorado and his parents divorced when he was at the age of 13. Later, at the age of 17, the Colorado native attended a Fellowship of Christian Athletes Camp to pursue his passion for Scripture. Further, he attended Arizona Christian University in Phoenix to earn a Bachelor's Degree in Christian Ministries.

As of now, Chad contributes towards social service being associated with Pilgrim Rest Baptist Church, where he served as Youth and Children's Pastor. Moreover, he also serves as the Student Ministries Pastor at the Church for the Nations.

Keep Visiting for the emerging updates on the life of Chad Johnson and Michelle Wiliams!