By LRU Writer | On: April 17, 2019
Many might recognize Chrishell Stause through her husband Justin Hartley, but the This Is Us actor's fans are not aware that Chrishell is a successful actress and a leading lady in the Soap Opera business...Known primarily for her performances in All My Children and Days of Our Lives, Chrishell made her Netflix appearing as herself in the 2019 show, Selling Sunset... 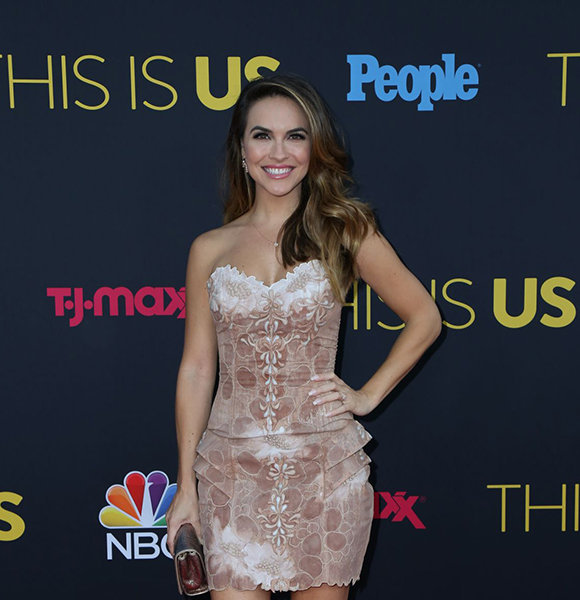 Many might recognize Chrishell Stause through her husband Justin Hartley, but the This Is Us actor's fans are not aware that Chrishell is a successful actress and a leading lady in the Soap Opera business.

Known primarily for her performances in All My Children and Days of Our Lives, Chrishell made her Netflix debut as herself in the 2019 show, Selling Sunset. Spare a few minutes to learn all about the uprising actress including her married life and actress!

Terrina Chrishell Stause was born and raised in Draffenville, Kentucky as the daughter of Japanese-Spanish parents. Chrishell, age 37, mentions she also has 10% of Irish blood in her veins.

The actress is notably recognized for her attractive body physique. Along with a height of five feet six inches (1.68 m), Chrishell has also maintained a healthy weight, weighing only 119 pounds (54 kgs). Further, her measurements are 36-24-35 inches.

It will be sexist to assume that Chrishell is famous for only her body as she maintains a successful career. She has also acclaimed a significant net worth to her name; the amount is yet to be disclosed.

Fancy Wedding With Husband, Past Relationship

Chrishell and her actor husband, Justin Hartley, were introduced through mutual friends. The couple first hanged out in a concert and as they became more comfortable with each other, they decided to give a chance to dating. The duo announced their romance in January 2014.

Chrishell and Justin both had experienced failure in relationships before. All My Children actress was engaged to Glee star Matthew Morrison; whereas, Justin was married to Lindsay Korman for eight years from 2004. They even have a 14-year-old daughter Isabella.

Chrishell and her now-husband, on the other hand, didn't rush to give a name to their relationship. They dated casually for years before making any commitments.

It was only in 2016 when the partners began thinking about sharing a future. Chrishell's boyfriend made no delay in popping out the question as he proposed his future bride with an expensive engagement ring. Chrishell could be seen flaunting her engagement ring all over social media sites.

Even after getting engaged, the Kentucky native and her fiance were in no hurry to ring the wedding bells. The couple eventually agreed upon a wedding, which was scheduled for the day they first met.

Another Wedding You May Like:- William Tell Wedding, Lauren Conrad, Kids

As witnessed by 70 of their guests, Chrishell and Justin exchanged wedding vows on 28 October 2018 in a romantic ceremony. The groom's daughter was also present at the wedding, where she served as the ring bearer and flower girl. Chrishell Stause and husband Justin Hartley at their wedding on 28 October 2018 (Photo: People.com)

It's been over six months since Chrishell and her husband tied the knot, but the couple is in their honeymoon phase. Together, the duo has celebrated birthdays, Valentine's, and many more occasions.

And with Justin's astounding net worth of $7 million, the pair can enjoy any pleasantry they desire.