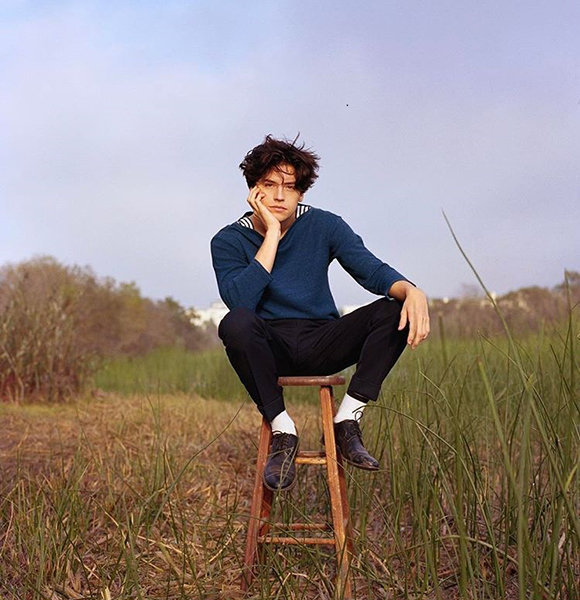 After two years together, Cole Sprouse broke things off with girlfriend Lili Reinhart. The duo, who portrays Jughead Jones and Betty Cooper on CW series Riverdale respectively maintained their distance at the Entertainment Weekly's Comic-Con party on 21st July 2019.

At the said event, Cole allegedly confessed about the split to a friend. Meanwhile, Lili opted to stick by their Riverdale co-star Camila Mendes and Madeline Petsch. Despite the breakup, the former lovebirds reunited during the Riverdale's panel on 22nd July 2019. Lili later took to Instagram and joked never wanting to get placed to Cole.

Long before they began dating, Cole and his now-ex Lili portrayed each other's love interest in Riverdale.

Back in May 2017, the duo sparked dating rumors when Cole shared a photo of Lili surrounded by flowers. As expected, the Instagram post threw the fandom in a frenzy.

For their part, the lovebirds refused to comment on their budding romance. Then in March 2018, Cole reasoned their decision by saying:-

“Because whether you dismiss those rumors or whether you encourage those rumors, it’s giving people who are in my opinion are a bit entitled to your personal life more power, and you have to have spaces for reverence in the industry..."

Less than two months later, Cole and then-girlfriend Lili stepped out together at the 2018 Met Gala red carpet ceremony.

Even after several high-profile public appearances and an increasing number of social media posts, the lovebirds remained wholely reserved about their dating life. Talking To GQ in February 2019, Cole dubbed their romance as "something that exists."

Another Child Actor You May Know:- Does Skai Jackson Have a Boyfriend? Or Just Too Young For it Now?

Cole was born in Tuscany, Italy in August 1992. His English teacher parents - Melanie Wright and Matthew Sprouse - had welcomed his twin brother Dylan Sprouse a quarter of an hour earlier than him.

Together, Cole and his twin brother Dylan starred as the leads in the beloved Disney sitcom The Suite Life of Zack and Cody. The stated show - which aired between 2005 and 2008 - helped the Sprouse siblings become a household name.

Cole stint as a Disney star was a lucrative endeavor. Per reports, he pocketed $40 thousand per episode. The earnings combined with income from other business ventures helped him amass a whopping $8 million in net worth.

When "The Suite Life of Zack and Cody" ended in 2008, the Sprouse brothers headed for the University of New York. The duo earned their degree in 2015.

While Dylan got involved with the beverage business, Cole immediately jumped back to acting. In 2016, the latter landed the role of Jughead Jones in Riverdale.