By LRU Writer | On: May 21, 2018
American actor and documentary filmmaker Colin Hanks is best known for his roles in comedy movies: Orange County and The House Bunny and was also part of 2005 megahit King Kong. The eldest son of Oscar-winning actor Tom Hanks is married to his longtime girlfriend. Whats more, the celebrity couple are proud parents and as happy as they had ever been despite being a long time married. 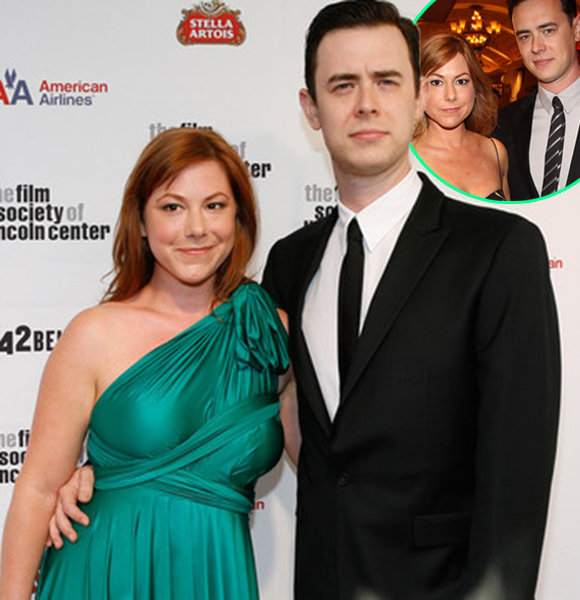 American actor and documentary filmmaker Colin Hanks is best known for his roles in comedy movies: Orange County and The House Bunny and was also part of 2005 megahit King Kong.

The eldest son of Oscar-winning actor Tom Hanks is married to his longtime girlfriend. The celebrity couple is proud parents and as happy as they had ever been despite being a long time married.

From Friends To Married

The Sacramento native first met with restaurant publicist, Samantha Bryant through mutual friends. Despite having the same friends and frequently meeting the pair never gave attention to each other.

Colin was quoted saying to NewYork Times in 2009:

“We had the same group of friends and knew of each other, but never paid attention to it.”

Both were children of actor parents and lived in Manhattan at the same locality, which frequented their meetings.

However, all those meetings culminated in seeding feelings of respect towards each other which progressed quickly to love. Samantha described Fargo alum as a 'Perfect Gentleman' signifying the mutual respect present between the pair. The son of America's darling Tom Hanks proposed Samantha and the pair were engaged in June 2009. After nearly a year, the couple decided to take their relationship a step forward and got married in May 2010.

Draped in a white gown, Samantha looked a chic figure while Colin rocked the Tuxedo with ease. The couple exchanged wedding vows in front of Colin's dad Tom Hanks and mother, Rita Wilson.

The 150 people guest list included actress Reese Witherspoon and her husband Jim Toth, and Alysa Milano and her partner David Bulgari, all present to witness the pronunciation of Colin and Samantha as husband and wife.

The loved-up couple multiplied from two to three when Colin and Samantha welcomed their first child Olivia Jane Hanks on 1 February 2011.

The family's representative announced the news saying that both mother and child were healthy and the family very happy with their newest addition.

Furthermore, on 7 February 2013, Colin announced that he had become a father for the second time. Speaking to PEOPLE after welcoming the second daughter, Charlotte, he said:

"Ms. Charlotte Bryant Hanks has decided to join us. She’s as happy and healthy as we are overjoyed and tired."

Colin, who also appeared in acclaimed TV series Band Of Brothers, further added his dad Tom, who had just finished his Broadway Lucky Guy, could not just wait to get together with his grandchildren. He said he and Samantha were hoping to catch some sleep after the rigors of pregnancy, handing the reins of their kids to Grandparents Tom and Rita.

The bigtime Star Wars fanatic in 2015 talked about how his four-year-old daughter rendered him speechless when watching star wars together.

The actor described that her daughter was bored of having all the male representatives in the franchise, and asked him why were there so few female stars in the movie. The actor Instagrammed a post expressing his pride at having such an understanding daughter despite being just four years of age. The arrival of daughters in the actor's life has not diluted the love for his wife, Samantha. Colin does not shy away from showering his love to his lady on social media, and he posted a selfie of the couple celebrating Valentine's day 2018 on his Instagram, where he boasted his wife to be the best of the rest.

Similarly, he also posted a heartfelt tribute to Samantha describing him and his daughters as the luckiest persons in the world for having Samantha by their side.

The couple is still going strong despite spending the best part of a decade together, and with every passing day, their bond is growing stronger.