By LRU Writer | On: July 02, 2018
British model Demi Rose gained substantial fame after posting some selfies on Instagram, where she has garnered a fans base of more than four million followers. Further, she has also worked as a model appearing in the cover of several magazines including FHM, Zoo, and Nuts. As for romance, Demi, known for her seductive curves, has dated a couple of men in the past. However, she is repelled with guys who possess a particular kind of characteristics. 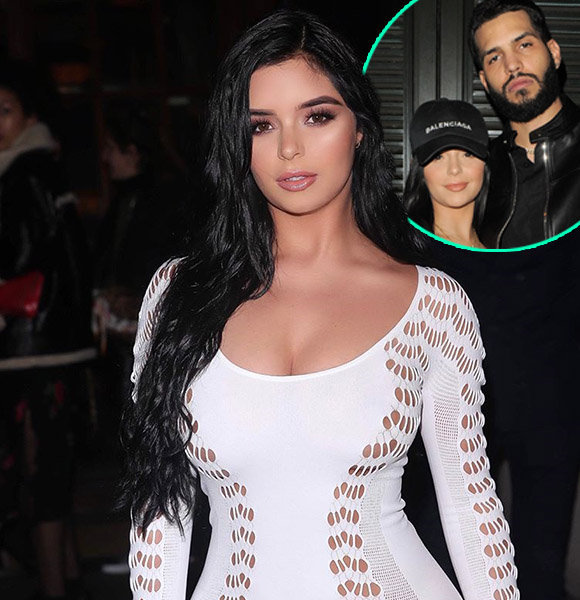 British model Demi Rose gained substantial fame after posting some selfies on Instagram, where she has garnered a fans base of more than four million followers. Further, she has also worked as a model appearing in the cover of several magazines including FHM, Zoo, and Nuts.

As for romance, Demi, known for her seductive curves, has dated a couple of men in the past. However, she is repelled with guys who possess a particular kind of characteristics.

Learn about the personal life of this hot model along with her wiki-like-bio.

Back in May 2016, Demi Rose was involved in a high-profile dating as she established the romantic relationship with rapper Tyga. The news of two dating spread after they were pictured together attending a party in Cannes, which was just weeks after his split from Kylie Jenner.

The pair was again spotted at the Gotha nightclub located in the exclusive French resort. Their romance garnered considerable media coverage as Demi looks similar to Tyga's ex-girlfriend Kylie Jenner and Demi being named as the "British Kylie Jenner."

However, the pair separated after dating for a short period, and Tyga reunited with his former girlfriend, Kylie.

Later in July 2017, the 23-year-old was rumored to be dating DJ Tom Zanetti. After the two were captured getting cozy on a yacht in Formentera, where they were recording a video. The pair was spotted cuddling each other with Tom's arms lying around her waist. The couple was even pictured holding hands behind the camera.

However, Tom later denied the allegations in a 2017 interview and claimed that they were only good friends. Talking to The Sun in August 2017, he stated,

“She's a stunning girl but me and Demi are just friends! And she obviously featured in my new video, so it's a professional relationship, but we're good friends too."

As it turns out, she was actually dating someone else in secret. She was reportedly dating DJ Chris Martinez and was clicked kissing each other at the Madrid airport in December 2017. The couple is taking their dating strong till date. The 5 ft 2 inches tall internet personality has been posting several photos of the two in various occasions. On 12 March 2018, she posted a picture along with Chris calling him her other half. Later, on 5th April, Demi posted another Instagram image describing her boyfriend as her king. With such a lovely relationship, the couple looks perfect for each other. Although she is still involved with Chris, it seems like Demi is getting a lot of unwanted attention these days.

On 3 May 2018, she posted a series of tweets describing the qualities she wants in her boyfriend along with the annoying habits of some crazy fans.

In the first of the three tweets posted that day, she talked about guys who could not handle rejection. Further, Demi mentioned they would insist that she was single even though she would have just disclosed her relationship status to the person.

"Lol how can I just tell a guy I’ve got a boyfriend whilst he’s trying to talk to me and he replies “You ain’t got no boyfriend”. Some people just can’t hack rejection can they..."

In the second tweet, the British national talked about feeling intimidated when guys tried to get her number adding that she liked things to happen naturally.

"And FYI as a girl I’ve always hated being approached by guys trying to get my number. I’ve never given it away and always felt really intimidated. I like things to happen naturally."

For the final post, Demi wrote that she didn't like being complimented or criticized for her looks. The model, famous for her killer curves, further added claiming that she had much to offer in a relationship than just her body. This tweet comes after the model was accused of undergoing cosmetic surgery. Demi, whose body measurements include a size of  37-24-36 in or 94-61-91.5 cm, has always denied the accusations of performing a cosmetic procedure.

Demi, who possesses a British and Colombian ethnicity, is the daughter of Barrie and Christine Mawby. Born in Birmingham, Demi belonged to a middle-class family with her father working as a bank manager. She attended the New Oscott Primary School before joining the John Willmott School located in Sutton Coldfield. Demi later graduated from the Walsall College with a degree in College-Level Beauty Therapy and Spanish. Demi also has a sister with whom she continually remains in touch.

Her family has always encouraged her to pursue her passion for modeling. Demi's parents are proud of their daughter's achievements. She currently resides far from home in Miami, Florida, but regularly visits her parents on different occasions.