By LRU Writer | On: November 28, 2016
What would you do if you got hit on by a major celebrity, let’s say by the OVO boss and rapper Drake? If you ask me, I would have dropped dead right on the spot (because he is Drake, and I am a major fangirl). But what did Doris Burke do when she got hit on by Drizzy?  We have all the inside scoop about the little flirty incident. 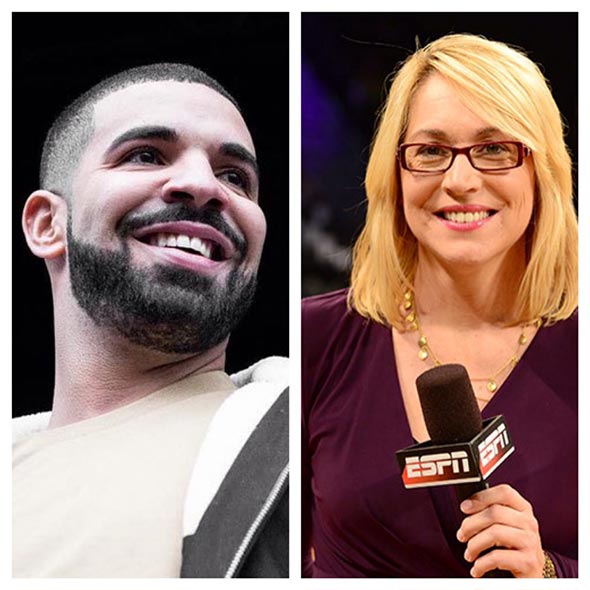 What would you do if you got hit on by a major celebrity, let’s say by the OVO boss and rapper Drake? If you ask me, I would have dropped dead right on the spot. But what did NBA sideline reporter Doris Burke do when she got hit on by Drizzy?  We have all the inside scoop about the little flirty incident.

We all know through the many affairs Drake has had in the past, that he is more of a woman seducer. From Rihanna, models that look like Rihanna to Serena Williams and now Doris Burke too? Are you ever planning to settle down anytime soon Drizzy? Okay, let us know what happened.

It was an average day in work for Burke, who was attending the game 6 of the Eastern Conference Finals, Cleveland Cavaliers vs. Toronto Raptors. Drake, the official ambassador for the Toronto Raptors, was sitting in front of her.

But what followed next left Doris speechless. Drake turned around and made a heart shape with his hands and pointed at her, repeating the same thing again.

She revealed this during an interview with the New York magazine.

“I just could not believe this happened. Drake turned around — my seat at game six was right behind him — makes a heart shape [with his hands], and points at me. I’m looking around behind me to see who’s there, turn back to him, and then he points and he does it again. I texted my daughter and said, “You need to know Drake just did this to me.”

Even Complex covered the news:

Such a flirt eh Drake? During the Toronto Raptors game on November 16 against Golden State Warriors, Drake talked more about his crush on Doris while he wore a shirt with an image of Doris Burke printed on it with the caption text "Woman Crush Everyday" and even asked her out for dinner.

Doris seemed to find the Dinner invitation interesting and responded with a tweet saying,

Both the parties seem to be having fun but who knows this fun might escalate into an actual relationship, till then we can only expect the best from both of them. Now let’s move on to her personal life and her career highlights shall we?

We all recognize Doris Burke as a sideline reporter for the NBA Finals for ABC Sports and an NBA commentator for ESPN. She started her career in broadcasting as an analyst for women’s games. She was the first female analyst to call a New York Knicks game on television and on radio.

The receiver of USA Today’s Rudy Award for Best New Face in Sports Television, Burke was a college basketball player for Providence Friars. She was inducted into Providence College Hall of Fame in 1999.

Here is a video of Doris Burke interviewing LeBron James power forward of Cleveland Cavaliers after winning the NBA 2016 Finals.

One of her fans made a video demonstrating Doris' athletic skills.

Doris Burke married Gregg Burke, her long-time boyfriend in the year 1989. Despite staying married for many years and having two children, daughter Sarah (1993) and son Mathew (1995), the couple’s married life wasn’t as successful as their career. They had to end it with a divorce. The reason behind the divorce is not disclosed yet. But when they were together, they were very supportive of each other. In an interview with Hartford Courant, Gregg shares how she nailed the game even in such a hurry and totally unprepared.

She nailed it. She nailed the game. I'm not just saying that because I'm married to her, either.'

Taking about Burke’s ex-husband Gregg Burke, he is also a television personality. Currently, Gregg is the Deputy Director of Athletics and Head Golf Coach at the University of Rhode Island. He is a graduate of political science from College of the Holy Cross. According to some tabloids, Gregg is the reason behind Doris stepping into television.

Doris Burke (birth name Doris Sable) was born on November 23, 1965, in West Islip, New York. She attended Providence College where she played basketball for the college team and eventually ended her college basketball career as the school's leader in assists.

She finished her education at Providence with a bachelor's degree in health service administration/social work and later a master's in Education. Doris began her broadcasting career in 1990 as an analyst for women's games for Providence College and eventually became a lead analyst on ESPN's coverage of WNBA.

She eventually started her work as a Sideline reporter in 2009 and has been working in the same position since.