By LRU Writer | On: May 06, 2018
American model Dustin McNeer is one of them, who rose to fame after competing in the 22nd cycle of Tyra Bank's America's Next Top Model. He earned colossal fans after appearing the show, who naturally got interested in his dating life too! 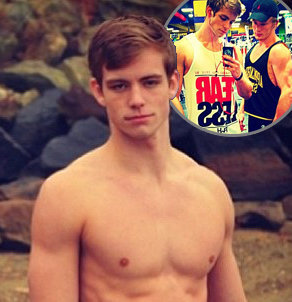 American model Dustin McNeer is one of them, who rose to fame after competing in the 22nd cycle of Tyra Bank's America's Next Top Model. He earned colossal fans after appearing the show, who naturally got interested in his dating life too!

So, if you belong to the group of his fan fanatics, join in for we will be uncovering Dustin McNeer's gay rumors along with his dating life!

The handsome hunk Dustin McNeer is running at the young age of 20 but already garnering massive stardom. Aside from stardom, he also possesses many female fans and followers, who dream of dating the young model.

However, the reality star seems to be not interested in dating as he seems to have not found his Miss Perfect to make his partner.

Instead, he spends his Valentine with his mother, the significant lady of his life. In 2018's Valentine, Dustin went with his mom for an Icecream treat at Ninety's Ice Cream and shared a glimpse of their time being on Instagram. He captioned the image as,

Got to hit @ninetysicecream with mama bear for Valentine’s Day And interestingly he has even hinted his straight sexual likeness via a tweet back on 3 Oct 2016. During the 2016's National Boyfriend's Day, Dustin revealed that he was single via a tweet and further added that he needs to be a someone's boyfriend.

The tweet hints Dustin's preference for a girl and makes it apparent that he is not a gay.

America's Top Next Model's contestant had modeled for famous brands like Calvin Klein and Hollister before he appeared in the show. However, his experience as a model couldn't lead him to win the title of the ANTM as he got eliminated in the show even after given a second chance.

During an interview with the sheknows.com on 10 October 2015, Dustin talked about his elimination and his experience in the ANTM. He quoted that he felt ecstatic to be part of the fantastic adventure and stated that he had learned a lot from the show. Dustin also revealed that he was taking classes for acting to perfect his modeling and expressed his gratitude towards the show.

After the show, Dustin started working on his body to be the part of Men's Physique competition.

In one of his Instagram posts uploaded on 8 August 2017, Dustin Instagrammed a picture with his mom and quoted her as her motivator while flaunting his hunky physique. With hard work, determination and mother's support, Dustin won the second place in the competition and even shared the news with his followers via Instagram pictures shared in September 2017.

Through the caption of the photo, he revealed that his weight at the time was 181lbs while the winner was 240lbs. He added that he would be putting 60lbs more to compete next time.

Well, through such sheer determination and support of the mother, Dustin is already in the pathway to garner success and stardom, and there seems to be no shortage of good wishes on the way for him.