By LRU Writer | On: June 15, 2017
When it comes to proposing celebrities, take it to a whole new level by popping the question unexpectedly on-air causing a moment of shock and tears of happiness. This time, it was the viewers of the show, ‘Dancing with the Stars’ that received a great shock when a participant dropped to his knee and asked the question. Any Guesses, who it was? 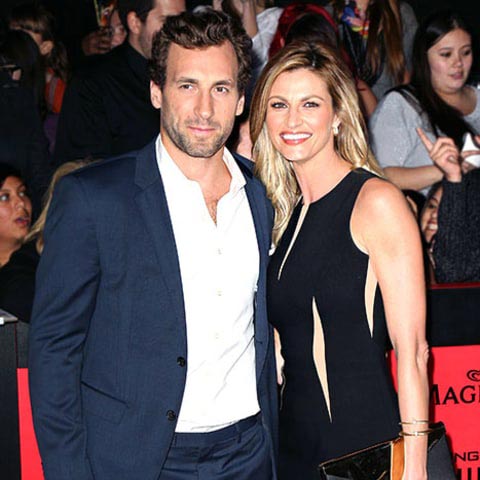 When it comes to proposing, celebrities take it to a whole new level, the celebrities surprise not only their partner but also shock the audience by popping the question unexpectedly on-air. This time, the viewers of the show, ‘Dancing with the Stars’ received a great shock, when a participant dropped to his knee and asked the question. Any Guesses, who it was?

The athlete thought to take their relationship a step further by transforming from a boyfriend to a fiancé. So, after his performance and score, as Erin was interviewing him, he suddenly dropped to one knee and popped the question.

The whole backstage exploded with excitement followed by the judges and audience in the front stage. Erin without second thoughts said “Yes.” The atmosphere got so filled with emotions that the co-host Tom Bergeron had to take a commercial break with teary eyes.

Caption: Noah Galloway Shocks Girlfriend With Heartwarming Proposal on 'DWTS' on May 2015

As big of a moment as it was for the former ESPN host, Erin Andrews had to face similarly scaled of events not so long ago. In fact, just in March 2016, her trial case came to an end. She had been fighting a case of stalking and intrusion related to her leaked nude pictures and videos in 2008.

It was leaked by a man named Michael Barrett who was arrested in 2009 trialed as guilty and given suitable punishment and fines. But Erin Andrews felt that the man deserved more for stalking her and the intrusion of her life in a way which could have severely harmed her life. So she had filed a lawsuit not only against him but Marriot Internationals (for port-foiling her to the hotel), Radisson Hotels (where the video was shot) and 5 other entities for negligence or participation in the crime.

She expressed years the fear, shame, and depression since the incident on several occasions. So, she must have felt a little lighter when the court’s verdict in her favor where she was be awarded 55 million dollars to her 75 million dollar request.

Caption: Erin Andrews on the Nude Video Scandal | The Oprah Winfrey Show | OWN on February 2016

There has also been a lot charitable social works that Erica is known for performing. She launched a campaign called Girls Night Out in partnership with 'Stubhub' that encourages women to be proud towards their passion for sports by giving them a chance of winning tickets to attend any game of their choice on October 2011.

A part of what the campaign made would also be donated to Tragedy Assistance Program for Survivors. She also co-hosted the 'Music Builds: CMT Disaster Relief Concert' on May 2013 that would be utilized to treat the destruction from the April 27 tornadoes in Oklahoma.

Setbacks in their Love: Married Plans and Boyfriend?

This was not all that she had to struggle with. In the April of 2015, her love was put to the test after Jarret was arrested for the possession of drugs whereby he pled guilty. She had to face a lot of trouble with this case as well especially with the vengeful tweet of Marshall Henderson.

However, the past is gone and let’s hope that the future is brighter for Erin. She has had a very nice start after the 55 million $ win on the lawsuit and getting a life partner.

Welcoming a new family member before the wedding:

Erin Andrews and her fiance Jarret Stoll are welcoming a Golden Retriever before their wedding and stating the same Erin said,

"We want to get our Golden Retriever! "We're supposed to get him in May. We'll get our dog before the wedding."

Erin and Jarret are all set to exchange wedding vows and get married to officially become a husband and wife, on June 24, 2017, at Marina Del Re, CA.

Recently in an interview in January 2017, Erin shared her battle against cancer which no one knew about and came out victorious as a survivor.

In June 2016, Erin went for a routine check up and four months later, following several check-up and tests the doctor - an oncologist called her up and concluded that she has cervical cancer. Further, the doctor told her that she needed a surgery too.

Erin strictly ordered her oncologist and demanded that she would not miss a game as it was Super Bowl.

“I’m not watching any football games at home. This is [Fox’s] Super Bowl year, and I’m not missing the Super Bowl.”

Her fiancé Jarret Stoll was by her side when she was battling against the life-threatening disease. And following her demands not to miss Super Bowl, he told Erin to focus on her health first.

Then Erin responded to Jarret, and she stated her strong desire to be part of Super Bowl as

“You wouldn’t miss a game,” she told Stoll, who played 13 seasons in the NHL. “You’d play through any injury, do whatever it takes to get back out there. That’s going to be me.”

Erin underwent surgery on October 11, 2016, at Cedars-Sinai Medical Center, Los Angeles. And two days after the surgery Erin flew to Green Bay to do the job which gives him solace and strength. During the tough times, Erin’s father Steve Andrew joined her daughter to support her.

Although Erin was recommended to rest, she did not listen as the sports was her only escape.

“Should I have been standing for a full game five days after surgery? Let’s just say the doctor didn’t recommend that, but just as I felt during my trial, sports were my escape. I needed to be with my crew.”

Cancer not only victimizes the patient but the word cancer spread terror in the life patient’s family as well. And Erin’s father Steve Andrew- a television journalist expressed his feelings as,

“When you hear the word cancer, you fear the worst, When it’s your child, you think to yourself, you think to God: Take me, not her. She has been through enough. She is just getting her life back.”

Two weeks after the surgery, without thinking about cancer, she engaged herself with football and Dancing with the stars. On November 1, 2016, she went to her oncologist for the further treatment, and on November 17 her doctor declared that she does not need radiation or chemotherapy.

Erin did not share being diagnosed with cancer with anyone, and she stated her reason as,

“Throughout my career, all I’ve ever wanted is to just fit in, that I had this extra baggage with the scandal, I didn’t want to be any different. I felt that way about being sick too. I don’t want players or coaches to look at me differently.”

Following the tragic incident of video leak and surviving cancer, Erin has come out as a stronger person than before. She is a role model for many people and her fans wish that she is blessed with a healthy life.