Alyson Hannigan's appearance has created a drastic buzz on social media with breast implants and nose jobs assumptions. Several rumors claim that her breast size had grown because of her recent pregnancy or subsequent weight gain. Likewise, many believe that she got a breast job after the birth of her second child in 2012. 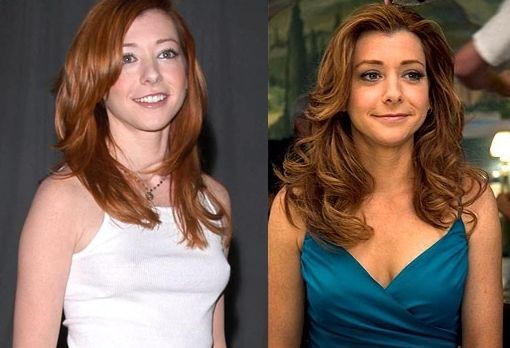 Caption: Before and after images of Alyson showing the change in her breast size. (Source: liverampup.com)

Several people claim that the actress doesn't look like how she used to look before and have tweeted regarding her appearance as well. Further, fans think that Hannigan's plastic surgery speculations is true as she has managed to look younger even in her 40s. Although, one cannot only point at plastic surgeries as the reason for her youthful look, as her regular workouts might have worked wonders for her appearance.

Hannigan is in a marital relationship with her long-time boyfriend, Alexis Denisof. She married her "Buffy the Vampire Slayer" co-star Alexis at Two Bunch Palms Resort in Desert Hot Springs, California, on October 11, 2003.

Further, Hannigan is best known for her roles as Lily Aldrin on the CBS sitcom How I Met Your Mother (2005–2014), Willow Rosenberg in the television series Buffy the Vampire Slayer (1997–2003), and Michelle Flaherty in the American Pie film series (1999–2012). Further, Alyson also hosts the television show Penn & Teller: Fool Us since 2016.