Openly Gay Actor Rupert Everett: States To Have Settled With His Boyfriend, Planning To Change Partner?

By LRU Writer | On: October 24, 2016
It is a known fact that parents have a desire to see their children married and rear lovely grandkids. But this dream of parents cannot always be fulfilled. Likewise, today we are talking about an actor who is an open gay, but his mother still wants him to marry a girl and have a family.

It is a known fact that parents have a desire to see their children married and rear lovely grandkids. But this dream of parents cannot always be fulfilled. Likewise, today we are talking about an actor who is an open gay, but his mother still wants him to marry a girl and have a family.

An English actor and writer, Rupert Everett, do not feel hesitant to speak about his sexual orientation. It has passed more than four decades since he stayed in a relationship with any girl. It seems that Rupert has grown more confident and brave regarding his sexuality.

The actor of A Royal Night Out (2015), Rupert is currently sharing a relation with a Brazilian man named Enrico. According to a site, Enrico is about two decades young than him. However, we could not find more details of Enrico from any source. Rupert is now completely settled with his longtime boyfriend.

Rupert hinted in an interview with The Guardian in 2013 that he and his partner shares a very platonic love which is not driven by physical relation. He said,

"Sex isn't really over. I'm just not motivated by it anymore, and I used to be motivated by it purely. I think that happens to a man; it's part of a midlife crisis. But it's been quite nice, in a way, because I do lots of other things instead. Since it stopped, that major driving force, I've felt much calmer."

Since Rupert has made everyone known about his sexuality, we hope he does same regarding his partner. We hope Rupert will soon make his fans know the details about his longtime sweetheart.

Is his mother a nuisance for their relation?

Rupert mother is not conservative rather hopeful for the happiness of his son. Mrs. Rupert knew about the sexual orientation of his son when he was 18. However, she still wants him to marry a beautiful girl and live a wonderful life.

She shared about her expectation in an interview with The Telegraph in 2012. She said,

The expectation of his mother somewhat seems disappointing if we see from LGBT people's perspective. However, she has uttered those words only to see her son happy and contended in life which Rupert understands completely. 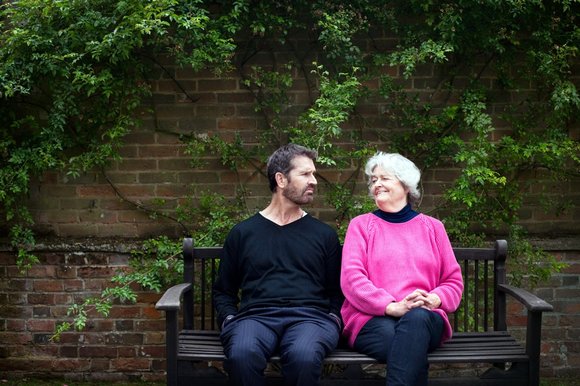 An actor who wants to have plastic surgery of his hair, Rupert does not feel bad when he hears his mother speaking things against his will but gives an amiable expression. Mrs. Rupert said,

“But I also think a child needs a mummy and a daddy. I’ve told him that and he takes it very well. He doesn’t get angry with me. He just smiles.”

As we said earlier, Rupert does not counteract in his mother words but gives a cordial reaction. In this sense, we are worried if Rupert is actually thinking of inhabiting his mother’s words and changing his partner. Do you think the aspiration of Rupert’s mother can destroy the relation of Rupert and Enrico?