Grayson Dolan Having A Hard Time to be Dating? Meet His Ideal Girlfriend

By LRU Writer | On: February 01, 2018
Grayson Dolan Having A Hard Time to be Dating? Meet His Ideal Girlfriend. Although Grayson likes to keep his personal life private from the media, sources have shed light on a few of his affairs. Back in the year 2014, Grayson was in a dating affair with the Vine celebrity, Sofia Olivera. 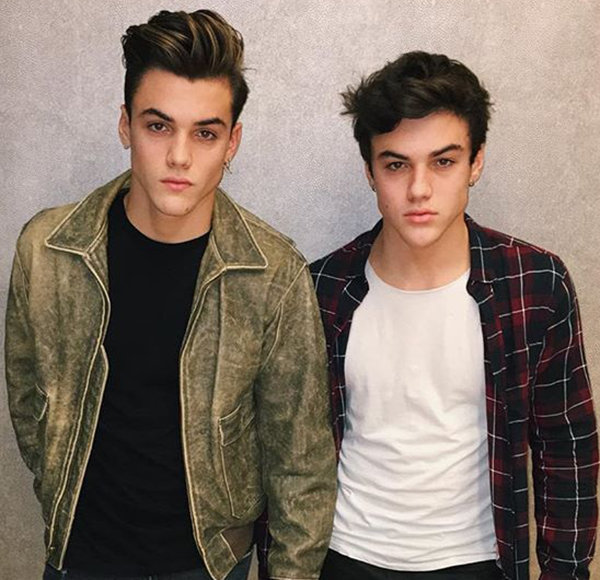 Bringing joy to one's face is a unique work of art!

Well, the technology has made it very easy to do so, enabling us to share our art and talents. So, day by day, we come across many Internet stars who have gained a massive fan base by showcasing their creativity online.

Let's take Comedian/YouTuber Grayson Dolan for example! Starting out with short funny videos on Vine, he has become a huge Internet sensation today!

However, could his focus on career be one of the few reasons why Grayson hasn't shared the scoop on his personal life? Let's get to the core of it along with his definition of an ideal girlfriend!

Although Grayson likes to keep his personal life private from the media, sources have shed light on a few of his affairs.

Back in the year 2014, Grayson was in a dating affair with the Vine celebrity, Sofia Olivera. The twins' collaboration with Sofia is said to be the initiation of the closeness between Grayson and her.

He even uploaded a picture with Sofia and his brother, Ethan, via his ask.fm profile along with a caption that gave away his dating status. It read, Moreover, they also kept tweeting each other. On April 14, 2014, Grayson asked Sofia if she wanted to go out with him.

They continued tweeting back and forth the same day, and their replies were pretty much 'flirty.'

Around May 4, 2014, Grayson took to Twitter again to ask his fans to follow his "g-f" Sofia. However, he also added that he is not dating her as a joke.

However, since then, no update about their relationship has been hit the media. Perhaps it wasn't a joke, after all.

Meanwhile, around the same time, in May of 2014, Grayson was reportedly in an affair with another Vine celebrity, Chloe Alison. He also appeared in some of Chloe's Vine videos.

Caption: Grayson Dolan with Chloe Alison in her Vine video

Later, in December of the same year, Grayson also tweeted saying he is missing someone.

However, he didn't address the person precisely.

After this, the social media personality hasn't been seen publicly with a new romantic partner.

On the other hand, every female fan of Grayson is always eager to know how he would define his ideal girlfriend.

Well, ladies, luckily, Grayson has spilled the beans on what qualities he thinks his ideal girlfriend should have in one of his YouTube videos.

Caption: Grayson Dolan and his twin brother Ethan Dolan open up about  qualities of their ideal girlfriend ( Published on August 11, 2015)

As per the video, Grayson seems to have utterly sorted out his choices on girls. He said he likes girls who communicate accurately with him. He added that adventurous and goofy girls are highly sought for.

Recently in October 2017, in an interview with TRL, when asked if he and his brother would ever date a fan, Grayson replied,

" That's a good question. I don't think you can control who you fall in love with. So, there's a possibility."

Well, that's a sweet treat for his fans out there!

Grayson Bailey Dolan was born on December 16, 1999, in New Jersey to parents Sean Dolan and Lisa Dolan. His parents, who are of Irish and Italian ethnicity, gifted Grayson of mixed ethnicity with attractive features.

Additionally, Grayson, 18, has two older siblings: his twin brother Ethan Dolan and sister, Cameron Dolan. Grayson's family has played a huge role in his life. Cameron was the one who introduced him to Vine, and Ethan has been his closest company since the beginning.

The twins who started their career with Vine currently have a whopping 5 million subscribers and counting on their YouTube channel.