Greg Amsinger Behind Camera! Married With A Wife And Low-Key Relationship

By LRU Writer | On: March 06, 2018
Greg Amsinger Behind Camera! Married With A Wife And Low-Key Relationship. American sportscaster and a studio host for Major League Baseball (MLB) network, Greg Amsinger is one of them who likes to keep things close to his chest, probably, because he does not want to stir up rumors. Therefore his life is a mysterious one. However, today we will present you some information behind his reel life covering his personal life details that you probably might have missed. 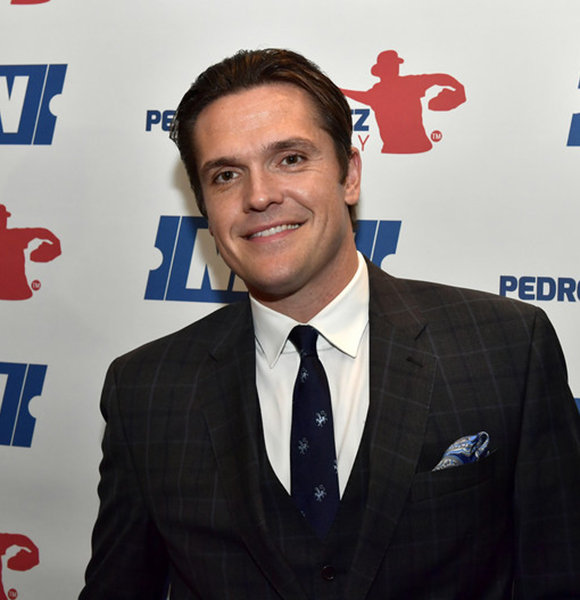 Greg Amsinger, American sportscaster and a studio host for Major League Baseball (MLB) network, is one of the reporters who likes keeping things close to his chest, probably, because he does not want to stir up rumors. So his life remains quite mysterious.

However, today we will present you some information behind his reel life covering his personal life details that you probably might have missed!

Greg, who is well known for hosting across MLB Network's programming including MLB Tonight, prefers remaining mum as far as his private life is concerned.

Greg has only let a few details surface about his personal life in the media. And that's how we know that Greg is currently married to a Commercial Agent at The Talent Mine, Erica Amsinger. The couple shares two children together and currently lives in the metropolitan area of New York City. However, their marriage date, as well as the identity of their children, remain confined.

Moreover, Greg is also not seen sharing pictures on his social media which has left his fans guessing about his personal life.

He surely did master the art of keeping things confined, right?

Greg was born on 24 May 1979 in St. Louis, Missouri in a family of seven including five brothers and a sister. He completed his graduation from the Lindenwood University of St. Charles, Missouri.

Greg has worked at numerous places including CBS College Sports, WTHI-TV and part-time radio jobs in school as producer of the St Louis Cardinals Baseball Radio Network at KMOX

Greg was the first and fundamental studio host for CBS College Sports Network. He has hosted numerous shows including 'Crystal Ball,' 'Inside College Football,' 'The #1 College Sports Show,' 'Generation Next,' and 'NCAA March Madness Highlights.'

Likewise, Greg has also done play-by-play for women's college basketball and paintball. He then went on to host the SEC Preview Show with Gary Danielson and Brian Jones in 2006.

Later in 2007, Greg co-hosted the World Series of Video Games with the former MTV host Susie Castillo and also hosted Tour de France for CBS in 2008. Moreover, his other Jobs included being the inaugural voice of the now defunct River City Renegades, an indoor professional football organization.

Further, in 2009, Greg joined the MLB network, and he is currently a studio host regularly appearing on MLB Tonight as a host and in special event coverage. After having vested so many years into his profession and reaching new heights in the career, Greg is undoubtedly earning an impressive salary, but the exact figures of the sum and the net worth he has accumulated remains confined.