Happily Married with Husband and 3 Kids, Divorce? Sage Steele opens up about the Discrimination in Journalism

By LRU Writer | On: February 20, 2017
So you’re a bi-racial woman and you don’t look black enough and you have an intensely curly hair that does not let you look white enough either. The question is how you will handle all those gazing eyes and raising queries of people. Sage Steele knows all about the hate she has received in twenty-one years of her career but still growing stronger than ever.

So you’re a bi-racial woman, and you don’t look black enough, and you have an intensely curly hair that does not let you look white enough either. The question is how you will handle all those gazing eyes and raising queries of people. Sage Steele knows all about the hate she has received in twenty-one years of her career but still growing stronger than ever.

44 years of age, Sage is a sportscaster and the host of NBA Countdown on ESPN and ABC.

It is a hard thing for women of any race to be a part of sports broadcasting, and when you are racially diverse, there are so many obstacles you have to come across. Sage felt the discrimination of being a bi-racial girl ever since her senior year of high school, where she was the only black kid among 1800 students. From then onwards she knew how cruel and ugly the world we live in really is.

“I didn’t even know that I was the only black student out of 1,800 kids until someone told me because I didn’t look at people that way — I never have.”

Not just her childhood but Steele has faced many discrimination and hateful comments all her life, on both personal and professional level. With a white, half-Irish half-Italian mother and African-American father, Steele always had difficulties finding her true identity. She never felt like she was fully accepted for being who she is.

Apart from having multi-racial parents, Sage is married to a guy who doesn’t belong to her race either. Her husband of seventeen years Jonathan Bailey is a Caucasian. This makes people bash her at times for being a black woman marrying a white guy. Even her children don’t look like they have a black-skinned mother. She was even called a nanny when she took her newborn daughter for an outing for the first time. This incident devastated Sage even to think how judgmental people can be.

“I can’t tell you how many times I’ve been called a sellout for marrying a white man and for having kids that look white.”

Sage opens up about being a bi-racial woman in sports media and how much it affects her as a person in an interview with Huffington Post.

In the interview, she talks about how women should stand up for themselves whenever they feel that they are harassed by athletes or fellow reporters.

She also talks about how important it is for someone to be themselves rather than pretending to be someone else.

“I’m really sticking to it!” And I preach that [lesson] to women — being yourself and being true to who you are.”

Sage Steele is a happily married woman with three beautiful kids. She got married to husband Jonathan Bailey on October 1999. There isn’t much information regarding Jonathan, but we know that he is a stay-at-home dad who formerly was a personal trainer. She has three children, two daughters, Evan, 9, Quinn, 13 and a son Nicholas, 11, with her husband. It's been seventeen years since she is happily married with no signs of divorce anytime soon.

Below are some pictures of Sage with her family via Instagram

Steele had her own two cents about the recent protests against 45th United States of America President Donald Trump's Muslim immigration ban. When massive crowds protested against the action in major airports around the country, Steele had the unfortunate incident on getting caught in the protest in LAX, when she missed her flight due to the delays caused by the crowd. She later on went on to vent about this on INstagram where she posted this image with the following caption

This comment was heavily criticized by multiple people, including fellow journalists. Clearly, Sage isn't a person without any faults. 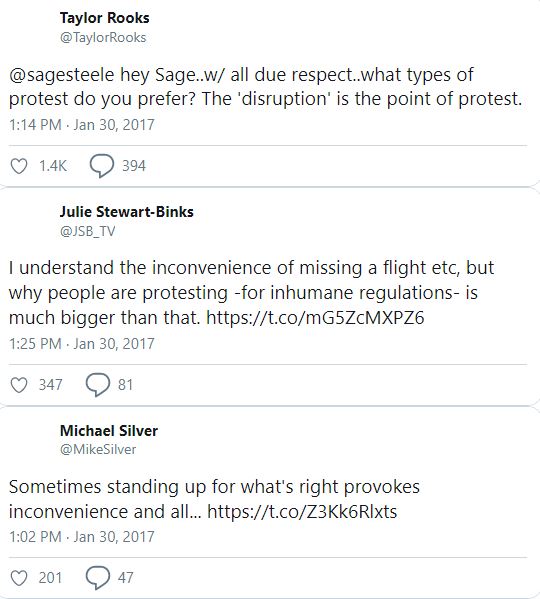 Sage grew up in a military family with two siblings, Chad Steele, and Courtney Steele. Her parents are Gary Steele and Mona Steele. Her father Gary is an army veteran who was the first African-American to play varsity football. In 2013, he was inducted into the Army Sports Hall of fame for his outstanding career.

Sage was recently caught up in a controversy when she shut-down the celebrity MVP from team Canada, Win Butler, after winning the NBA All-Star games while she was interviewing him for bashing America and its political situation.

Graduated from Indiana University with Bachelor of Science in sports communication, Sage started her career from WSBT-TV in South Bend, Indiana as a reporter and producer. She worked for couple more television stations like WISH-TV, WFTS before joining ESPN as a sportscaster.