Is Hayley Orrantia Pregnant? Or It's A Rumor Because Of Her Blessed Dating Affair With Boyfriend?

By LRU Writer | On: February 25, 2018
Is Hayley Orrantia Pregnant? Or It's A Rumor Because Of Her Blessed Dating Affair With Boyfriend? Well, some celebrities prefer to enjoy a low-key love life while there are some who allow us to read their personal life like an open book. In this context, we would like talk about the ABC comedy series "The Goldbergs" actress Hayley Orrantia’s dating affair. 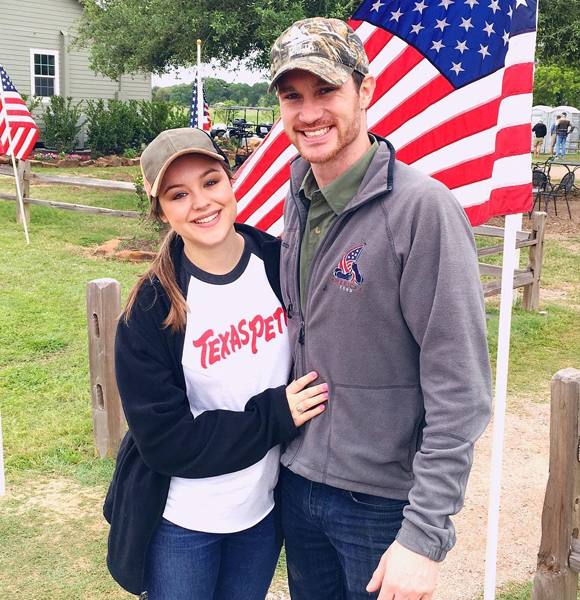 Falling in love is the most wonderful feeling, and no one can stop themselves from flaunting their love they find their perfect partner. However, the case is a bit complicated when it comes to the love life of the celebrities.

Some celebrities prefer enjoying a low-key love life while there are some who allow us to read their personal life like an open book. In this context, we will be talking about the ABC comedy series "The Goldbergs" actress Hayley Orrantia’s dating affair, which, in a sort of way, is like an open book to her fans.

The twenty-three-year-old American actress Hayley Orrantia has been very active in social media for a long time.

If you have followed her long enough, you might have come across her posts that reveal she was not in any relationship and was enjoying singlehood back in 2015.

Hayley, who used to openly talk about her solitary life on the social networking sites, is now happily flaunting her love interest all over her Instagram.

She has not only been sharing the pictures with her boyfriend but is also seen wishing him on his birthday and Valentine’s Days with very sweet messages.

“Truly good men are hard to come by, but this one right here is real. Thank you for an amazing week. You brighten everyone's day when you're near. ????” Caption: Hayley Orrantia sparked a romance with Brandon who is active on Instagram as “b_pmotivation” in April of 2016.

A month later, she shared another picture of the duo wishing Brandon Happy Birthday. Caption: Hayley Orrantia wishing Brandon on his birthday back on May 6, 2016.

Similarly, on May 6, 2017, Hayley shared another image of Brandon to wish him on his Birthday. She captioned their image as-

“Happy Birthday to the sweetest man I have ever met. You have brightened my life in so many ways and I am so thankful I get to share it with you. Every time I say "you're not real" it's because I'm still trying to convince myself that a man like you exists. I love you. Thank you for living life with me. ????” Caption: Hayley Orrantia shared a picture with Brandon on Valentine's Day of 2017.

Earlier this year on July 3, Hayley flaunted another image of Brandon on Instagram, expressing that he is just too handsome. Caption: Hayley Orrantia shared an image of Brandon in July this year stating that he is just too handsome.

She moreover flaunted their visit to Chicago with Brandon a week later. Hayley shared a beautiful picture of the pair with a caption “Chicago, you were a dream,” followed by a heart emoji. Caption: Hayley Orrantia and Brandon from their trip to Chicago in July 2017.

When a person follows Hayley in different social networking sites, he can see Hayley’s weight gain along with other different pictures of her with her boyfriend. Though Hayley has gained little weight, she is not pregnant; it is just a rumor initiated because of her weight gain and her blissful affair.