By LRU Writer | On: February 05, 2018
Jack Doherty: From Age To Family Details Of 14 Years Old YouTube Star. However, the young YouTuber, Jack Doherty came up with a unique idea which wasn't seen anywhere in social media while carving his career into YouTube and as of now enjoys immense popularity at the tender age. Let's have a glance towards Jack Doherty's detail in his wiki like bio. 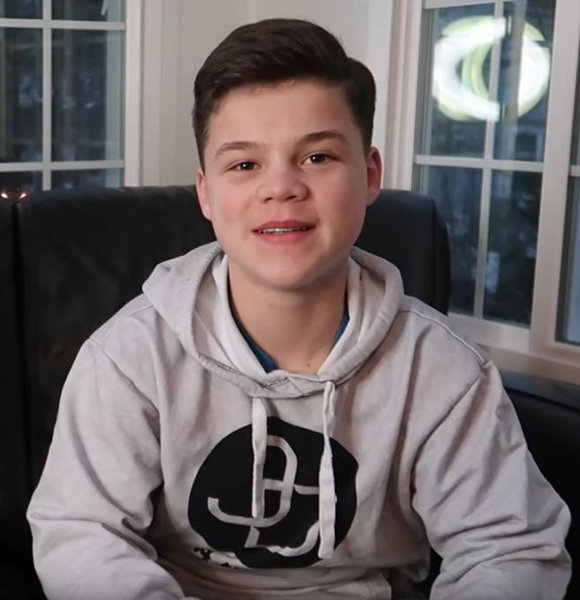 It's inevitable that the world is in the era of competition. As an outcome, people usually execute a xerox copy of already successful ideas rather than coming up with innovative ideas.

However, the young YouTuber, Jack Doherty came up with a unique idea which wasn't seen anywhere in social media while carving his career into YouTube and as of now enjoys immense popularity at the tender age. Let's have a glance towards Jack Doherty's detail in his wiki like bio.

American YouTuber Jack Doherty was born on October 8, 2003, in the United States to the parents Mark Doherty and Anna Doherty. He has an elder brother named Michael. Lately, he resides in Sea Cliff, New York.

While gushing about his parents, Jack posted a family picture via Instagram back on January 23, 2018, where the family seemed to enjoy each other's company.

Besides that, Jack's parents seem to acknowledge the work of thier son in the YouTube, and his father even made an appearance in one of his YouTube videos back on January 17, 2017. Apart from his father, his elder brother, Michael features in his interesting videos too.

Moreover, Jack flaunted his love for his mother and wished his mother on her birthday back on November 25, 2017. The tweet speaks volumes about the mother-son relationship.

Jack Doherty achieved an immense height on social media through his physical stunts like trick shots, flip tricks, and trampoline stunts. Further, he began landing perfect flip at the age of 7. Hence Jack created his self-titled youtube channel back on July 15, 2016, after then his popularity multiplied. As of now, Jack Doherty, who is at age 14, has more than 1.1 million subscribers on the youtube channel, and his most liked video is 'I FLIPPED ALL OF THESE!!' which has more than 18 million views.

A young Youtuber, who upload videos on very specific topics in which he possesses talent, even made a video on his fourteenth birthday. Have a glance at a video captured at Walmart.

Jack usually shoots videos for his YouTube channel on the weekends as he is entangled first five days of a week in his school. Back on Jan 28, 2018, he uploaded a video in which he shared his personal experience obtained while carving his career as a youtuber.

Jack Doherty advises how to get famous on YouTube sidewise, reveals his schedule (Jan 28, 2018 )

Jack Doherty can be attributed as an icon for every youngster, who wants to turn their passion into their career. No doubt, the ambitious artist apparently has a bright future as a YouTuber. Furthermore, his enthusiastic and ambitious attitude led him to be as famous as he is today!

YouTuber I FLIPPED ALL OF THESE!!