By LRU Writer | On: January 17, 2018
Jack O'Connell with Strings of Dating Affair with A-List Girlfriends! Born on August 1, 1990, Jack O'Connell is an English actor. He began his acting career professionally in 2005. Apart from his compensated profession, Jack is on the top list of ladies' man. The list of his dates, starting from early years to now, is not short. 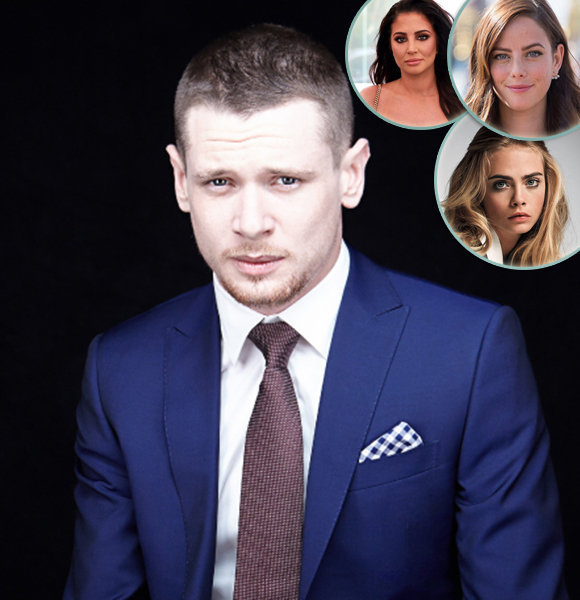 Charm is an art of attracting people. Some can manifest it the moment they meet other people, while others acquire and hone the title of a charmer through practice.

The aspiring actor, Jack O'Connell knows just how to use his charisma. He has been in the limelight for his personal life and professional life equally.

While the actor is geared up by major Hollywood projects in hands, his own life has always been a hot topic of discussion, especially his love life. He has dated quite a few A-list artists from the industry which he flaunted happily.

Let's have a close look at his dating history with a brief bio to enlight your fan knowledge!

Apart from his compensated profession, Jack is on the top list of ladies' man. The list of his dates, starting from early years to now, is not short.

Back in 2007, Jack dated his co-star Kaya Scodelario for a couple of years while starring in the show Skins. They split in 2009, and the reason behind their separation is no less than a big surprise. Reportedly, a confession from jack surfaced that he was not suitable boyfriend material for the relationship which left Kaya in pain.

In an interview, Kaya further revealed:

It broke my heart when we finished. I spent a whole week in my room crying, thinking that the situation could never improve.

Caption:  Kaya Scodelario on the arms of  Jack O'Connell

Soon, in 2012, Jack was addressing the rumors about his romance with the beautiful X-Factor judge Tulisa Contostavlos. Tulisa's tweets also played a vital role to hint their relationship. She shared a series of playful tweets about going out with the Derby lad. Caption: Tulisa Tweets about being out with Jack O'Connell

But the relationship was just for some weekend fun. According to the source, the couple called off the romance after three months of togetherness blaming the old favorite " incompatible work schedule" issue for their broke-up. As we can establish by now, Jack has never been shy about public display of affection. In 2014, Jack found a new love interest in the acclaimed model Cara Delevingne. They met on the set of the movie Tulip Fever in which they were both featured.

Cara seemingly confirmed the union by showcasing a close-up of hickeys on the neck of a man on her Instagram. Since a face was not visible, speculations arose as to who the man might be. But given the two moles on the neck similar to Jack's, we can put the pieces together.

The couple went well for a couple of months. A source close to them told E! that "They are having fun," noting that the blossoming romance between the good-looking duo isn’t all serious. Despite having strings of affairs, Jack is very much single now, and it might as well be the best news for the ladies out there.

If that is not good enough news, we have a shirtless photo of him. Take a look!

No wonder he's dated all these high profile artists.

Born on August 1, 1990, Jack O'Connell is an English actor. He was born and brought up in Derby, England, to parents, Alison and John Patrick O'Connell. As his mother is English and his father Irish, and he is of mixed English-Irish ethnicity.

He began his acting career professionally in 2005. He earned fame for his performance in teenage series Skins. His other acting credits that paid off well in his career are This Is England, Starred Up, 300: Rise of an Empire, Unbroken and Money Monster.

Not to mention, he's got big backers from the Hollywood diva Angelina Jolie. Jolie mentored Jack in the 2014 Second World War biopic Unbroken which boosted his popularity and performance. Caption: Jack O'Connell with his mentor Angelina Jolie at a Hollywood Film Awards

Likewise, he is also a part of the upcoming project The Man Who Killed Don Quixote which is set to hit the theatres in 2018. So, get the alarm ready!

Moreover, with his blessed acting skills and pretty charming appearance, O'Connell has come a long way to establish himself as a new toast in Hollywood.