By LRU Writer | On: December 16, 2020
Jaimi Barbakoff Cozy Inside Family Life With Husband, Children! If you are a lover of video games, you are in for a treat because the woman in today's story is an integral part of the video game era. Jaimi Barbakoff, the voice behind Triss Marigold in the video game series 'The Witcher,' has a personal life just as successful as professional. 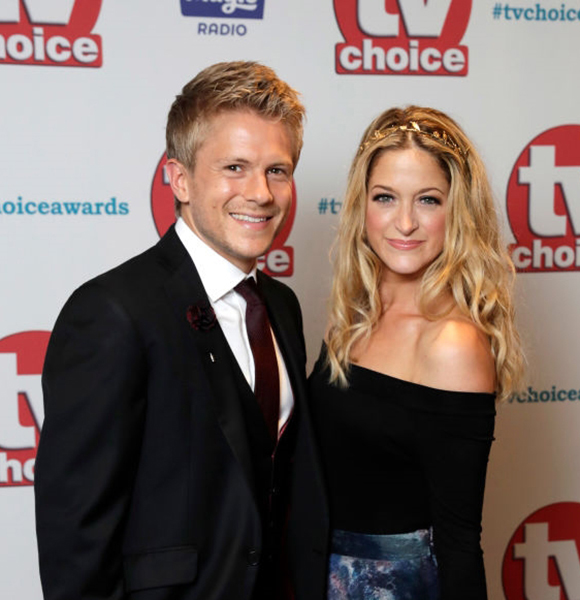 Do you love video games? If so, you are in for a treat because the woman in today's story is an integral part of the video game era. Jaimi Barbakoff, the voice behind Triss Marigold in the video game series 'The Witcher,' has a personal life just as successful as professional.

Please stick with us to know more about Jaimi Barbakoff in depth!

The English actress Jaimi Babrakoff emerged to fame for her performance in the sci-fi TV series, 'Black Mirror,' as Anna. Still, she became more familiar because of her contribution to several video games.

The most striking work of hers was as Triss Marigold in the famous video game 'The Witcher 2: Assasins of Kings'  and in the third installment of the game, 'The Witcher 3: Wild Hunt.'

The brunette beauty, who won many hearts with her acting skills and mellifluous voice, is an actress with few words when it comes to her personal life. She prefers to live her life far from the eyes of the media.

Jaimi is married to a fellow English actor, George Rainsford. Although Jaimi is not active on any social media, her husband is a reliable source to peek into her life. As per the series of George's post, the couple first met at a National Theater.

The two stepped up their relationship to a nuptial bond in 2012, which was declared by George on his Twitter handle.

The couple's happiness was soaring with the marriage, and it escalated when they welcomed their two adorable sons. On the occasion of 2016 Father's Day, Jaimi's husband posted a picture of him with their sons. George further uploaded another picture with his "besties," and not to mention, his lady, Jaimi, and the younger son were included.

Moreover, on 5 September 2017, the union made a public appearance together at the TV Choice Award, where George's performance on 'Casualty' was nominated. George took to Twitter to share a picture of the stunning duo.

Their bond must have been the center of attraction!

Close speculation at George's tweets reveals that Jaimi is living a blessed married life with her husband and is experiencing motherhood, too.

An English screen actress turned into a voice actress, Jaimi grabbed the media attention from the beginning of her career. She made her film debut with the TV mini-series, 'Last Rights' in 2005.

Jaimi voices Triss Marigold in 'The Witcher 2: Assassins of Kings' (Published on 26 Jan 2014)

Jaimi hit the cusp of stardom when she was nominated for the Best Female Vocal Performance In A Video Game In A Supporting Role in  BTVA Voice Acting Awards in 2015.

As of now, Jaimi has a handful of projects, and her professional life is out in the open for her fans to feast on, but her personal life details, including her age, have been kept private by the actress.

Who Voiced The Witcher 3 Characters?

There are great people behind the voice of the characters in The Witcher. And here we are today to discuss the talents who lent their voice in the amazing game called The Witcher.

1. Starting with the possible love interest of Geralt, Triss Merigold was reprised by Jaimi Barbakoff.

2. The witcher, Lamber, who was portrayed by Christian Contreras, did a commendable job. He has also voiced for Star Wars: Battlefront, Enemy Front, and many more.

3. The Bloody Baron, Phillip Strenger, was voice by James Clyde. He has played in films and series, including New Tricks, The Bill, and Black Earth Rising.

4. Then comes the seven-foot-tall man, Sigismund Dijkstra, who is played by Richard Hawley. Clearing things up, Hawley is not that tall; he stands at 5 ft 6½ inches.

5. One of the four Novigrad crime bosses, Cyprian Wiley, was voiced by Ewan Bailey. He is an actor and an Oxford University graduate.

6. Charles Dance justified the role of Emhyr, which is a villainous character. He is an Emmy-nominated actor and two-time Screen Actors Guild Awards winner.

7. Katie McGuinness lent her voice to the character, Keira Metz. Moreover, she has worked in Assassin's Creed III and Xenoblade Chronicles.

8. Last but not least, Geralt of Rivia, the monster slayer, is portrayed by Doug Cockle. He even won the Golden Joystick Awards Best Gaming Performance for his performance.