By LRU Writer | On: August 06, 2019
Jenna Bush comes from a family of achievers...both her father and grandfather are the presidents of America...She is married to her longtime boyfriend...expecting a third child... 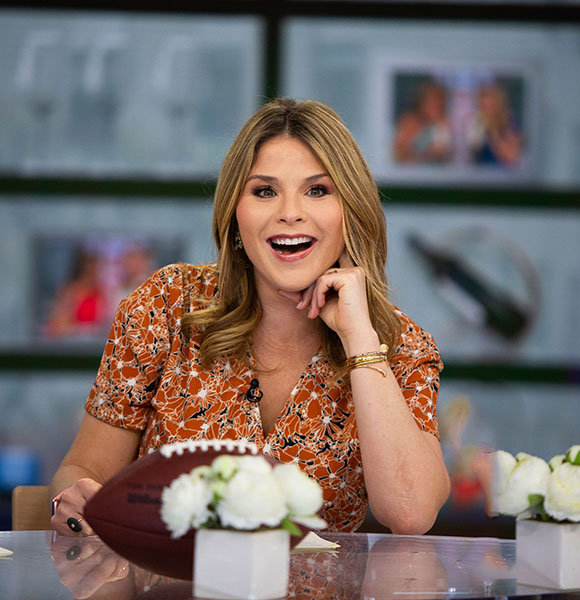 Coming from a family of high powered individuals, Jenna Bush refused to stay in their shadows. The grand-daughter and daughter of former Presidents of USA worked as an independent woman and successfully made a name for herself without anyone's help.

A journalist by profession, she filled Kathie Lee Gifford’s shoes to co-anchor the fourth hour of Today with Hoda Kotb in April 2019.

Married Life With Husband And Kids

Who would be brave enough to date the daughter of once the most powerful man in the world?

The courageous man was none other than Henry Chase Hager, the son of former chairman of Virginia Republican Party, John H. Hager.

The pair started dating in 2000. Jenna and Henry's relationship became public when they appeared together at a White House dinner in November of 2005. Jenna and Henry at their wedding on 10 May 2008 (Photo: GettyImages.com)

enna and her then-boyfriend took their time to know each other before they got married. The couple had an intimate wedding on 10 May 2008, eight years after they started dating.

Henry Hager had first asked President Bush for permission to marry Jenna before proposing her.

Earlier in 2019, Jena announced on Today that she was pregnant. The gender reveal was done on screen, and it turned out that the family was going to add a baby boy.

Jenna named the new addition to the family, Henry Harold “Hal” Hager after her grandfather and her husband. Born on the 2nd of August 2019 at 9:02 AM, Hal weighed 7 pounds and 5 ounces at the time of birth. Jenna Bush along with her husband Henry and her third child, Henry Harold “Hal” Hager on the 5th of August 2019 (Photo: Jenna Bush's Instagram)

Hal is the first son of the couple, making him the first grandson of former President George W. Bush. However, he is the third child to Jenna and Henry. He is the younger brother to two sisters, namely Margaret Laura "Mila" Hager (born in April 2013) and Poppy Louise Hager (born in August 2015).

The Today show host is on maternity leave to spend time with her children.

Jenna Bush is the daughter of former President George W. Bush and Laura Bush. She was born in Dallas, Texas where she spent her childhood with her twin elder sister, Barbara Pierce Bush.

As the daughter of a president, there is no doubt about her nationality as she is 100% American. She proclaims her birthday on 25 November 1981. As for her measurements, she has a height of 5 feet 8 inch (1.7 cm) and an average weight for a woman her age.

Regarding her education, Jenna attended The Hockaday School. In 1994, she moved to Austin along with her family and graduated from Austin High School in 2000. For her higher education, she went to the University of Texas at Austin and also found some time to take summer classes at New York University.

Jenna comes from a family of achievers; you could almost say that it’s in her blood. Throughout the years, she has dabbled as an author, journalist, and a TV personality.

She has published four books, namely Ana's Story: A Journey of Hope, Read All About It!, Our Great Big Backyard, and Sisters First: Stories from Our Wild and Wonderful Life.

With all her endeavors, Jenna has been able to gather fame and fortune for herself. Although her salary at Today is not disclosed, she is estimated to have a net worth of about $10 Million.