By LRU Writer | On: January 04, 2018
Jessica Brown Findlay Still Dating New Boyfriend? Actress Has a Lot to Share If you are still hovering around the "still dating" celebrity section, you might find the "Downton Abbey" star, Jessica Brown Findlay, whose is hopping around happily with her dating scene. Known for the new TV series "Harlots", the actress has already started her new relationship and her affair with her new boyfriend is something that one must see. 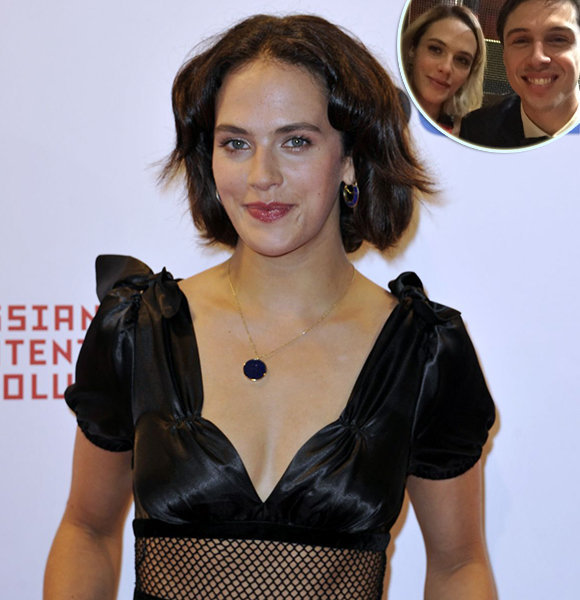 If you are still hovering around the "still dating" celebrity section, you might find the "Downton Abbey" star, Jessica Brown Findlay, who is hopping around happily with her dating scene.

Known for the new TV series "Harlots", the actress has already started her new relationship and her affair with her new boyfriend is something that one must see.

So, if you have lost the track of Jessica's dating affairs and want to know whether she is still on her dating time, or reaching to marriage or worse to break up, you have come to the right place. Why don't you find all the answers yourself down below?

Jessica Brown is the face that has cast a magic spell for a long time to those whoever watches her beauty and talents. And that magic showed its beautiful colors when Jessica was dating her then artist boyfriend, Thomas Campbell back in 2010. Jessica first shared the glance with Campbell at London’s Central St. Martins College of Art where she was one of the fine art students.

The love took them to the edge of moving in together but circumstances did not hold favorable.

However, Jessica's dating affairs stopped its paints with the artist Campbell in 2012 and took a different path. Though, neither Findlay nor Campbell made any official news about their split on the media, their separation was an open secret to all.

Jessica had the friendly split with Campbell and soon, the duo made on the list of “amicable exes” that supported each other through thick and thin, even after the breakup.

Jessica’s ex-boyfriend, Campbell, proved it better in the year 2014 when Jessica was one of the targets for celebrity phone hacking trends.

On September 2014, hackers hacked various intimate images and videos from her Apple iCloud account which still remains unidentified. Her spokeswoman also confirmed her appearance on hacked video clips but didn't make any further comments on the incident as it was under a criminal investigation.

A couple of days later, Campbell spoke in favor of his ex-girlfriend in an interview with  The Telegraph; saying that the incident was a huge invasion of privacy. He explained,

“It was a huge invasion of privacy, I feel really sorry for her. The video was nothing to do with me, I haven’t even seen it. But I do hope that anybody who sees it understands that grown adults do stuff for them that they don’t expect the world to see.”

“Anyone's private love messages whether they are visual or just text are always embarrassing if a third party sees or reads it. You don't even want your best mate to see your girlfriend in that way."

Two years later, Jessica finally opened up about the scandal stating that she wants to speak up because she wants the world to begin inspecting into the treatment of woman, particularly cyber crimes.

As a victim, she briefed that in a tech-changing world, there lack the required security and action units.

The 2014 celebrity hacking scandal didn't disturb Jessica for long. She breathed a new life into her dating affairs recently in 2017.

The actress fell in love with the very talented actor Ziggy Heath on the sets of her new TV series “Harlots”. It was around the start of 2017 when Jessica began to flap the wings of romance with her new boyfriend Ziggy. Jessica and Ziggy's romance was also confirmed by Mirror. According to a source,

“Jessica met Ziggy on the set of Harlots, and they hit it off straight away after she asked him out. She chatted him up- she really fancied him, and they have been together ever since.”

The love seems to be too deep; as the lovebirds attended the Harvey Weinstein Bafta after-party at the Rosewood Hotel. The duo spent the romantic night being cozied up on a sofa until 4 am.

Though Jessica's new affair is no more a secret, she still has more to say about her relationship with Ziggy. As for now, let's wait to find out whether her new found love would get married to her or not.

Struggling With an Eating Disorder is Hard!

If you thought that becoming a victim of celebrity hacking scandal is all the quirks that Jessica has to update, then there’s something more. The actress recently addressed that she has been struggling with the eating disorder for almost 13 years.

She disclosed that she had an eating disorder since the age of 14, and had been fighting ever since.

On her interview with the Daily Telegraph in March 2017,  she spoke about her eating disorder while talking about the exploration of mental health on her series "Hamlet." She revealed that eating disorder was one of the hardest struggles she had where she felt alone for a long time; as she hid her disorder.

Well, Jessica even explained how she coped up with the issue,

“Then I started talking and held my head up and instead of saying sorry decided to tell myself that I matter. For a while, I really shied away from things. It’s about learning to stand up and say, “This is me, and that’s OK”. I’m not going to be a better actor if I’m a dress size smaller. It’s nothing to do with my brain.”

In the process of surviving the disorder, Jessica had been in a therapy which made her appraise herself. Talking about how she decided to help herself, she said,

“If you are lucky enough to speak and be heard, it might be useful to others.” The more we have brave discussions like that, the easier it is to talk about things, and the less alone we can feel. It’s certainly made me feel less alone.”

Hardships come to everybody's life which in Jessica's case was an eating disorder and cybercrime victim. Her constant battle for her best performance in her work was already a thing to deal, and top of it, the eating disorder made it worse.

However, Jessica proved it's the determination and courage that counts, rather than the problem that you face. In this regard, the 27-year-old actress might be the new face for the eating disorder strugglers around.