Jordan McGraw With Wife-Like Figure! Girlfriend Proclaims To Be Luckiest

By LRU Writer | On: April 29, 2018
American singer Jordan McGraw, who is known to be the frontman of the band Hundred Handed, is in an ecstatic dating relationship with his girlfriend that he timely flaunts on his social media.His wife-like-girlfriend also doesn't back off when it comes to sharing her love life with her followers and quoting herself as the luckiest girl in the world. 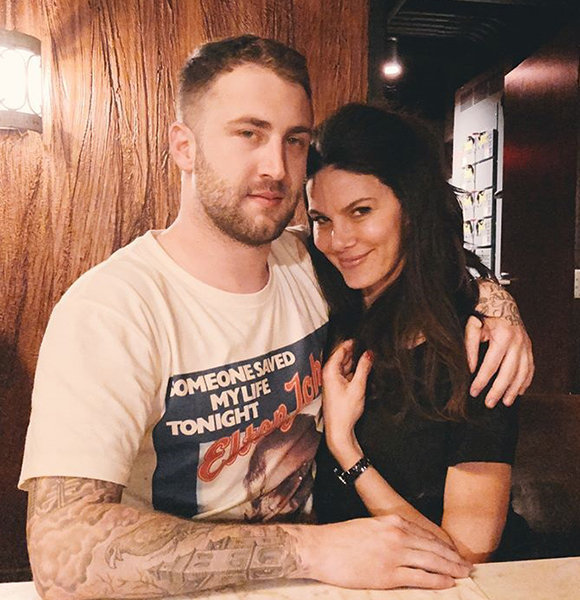 American singer Jordan McGraw, who is known to be the frontman of the band Hundred Handed, is in an ecstatic dating relationship with his girlfriend that he timely flaunts on his social media.

His wife-like-girlfriend also doesn't back off when it comes to sharing her love life with her followers and quotes herself as the luckiest girl in the world.

So, if you are eager to get acquainted with their dating life, join in the treat below!

The handsome Jordan McGraw is in a married-like-relationship with his beautiful girlfriend Ragan Wallake, who happens to be an actress and a photographer.

Though Jordan has not spilled the beans on the dating history and spoken on how their relationship blossomed, the social media accounts of both the lovers are evident of their blissful relationship.

The couple posts their together clicked pictures time and again on their social media and doesn't hesitate to share their affection for one another out loud.

The first picture that linked the couple together was the photo of Jordan that Ragan uploaded to her Instagram account on 30 April 2017. Ragan tagged Jordan in the photo and wrote that it was Dodger dedicated.

Since then, the social media accounts of both the lovebirds have flooded with adorable pictures dedicated to each other.

For instance, Ragan uploaded a mesmerizing picture with Jordan on the occasion of national boyfriend day on 3 October 2017. Via the captions, she said that she would post pictures with her bae because she is "shamelessly gushy" about her relationship.

Moreover, the couple can be seen celebrating special occasions together. Ragan Instagrammed a glimpse of her birthday celebration with Jordan on 21 December 2017, and captioned the picture quoting herself to be the "luckiest girl in the world." Jordan also took the special day on his Instagram and posted a boomerang video of Ragan while dedicating a heartfelt message to her. In the caption, he wished Ragan a happy birthday by quoting her as the "funniest, most beautiful, caring, loving, awesome, damn good food cooking, bestest friend" and love of his life.

Speculating on their love-filled social media posts, it has come to the limelight that Jordan has introduced his wife-like girlfriend to his family as well.

On the occasion of Jordan's mother, Robin McGraw's 65th birthday, Ragan shared a picture of Robin on her Instagram. She even wished Robin through the caption and quoted, " lots of L O V E. I love you XOXO."

In the comment section, Robin thanked her future daughter-in-law and hinted that they have together visited Paris as well.

Thank you sweet Ragan!! here's to Paris! what a fun family trip!

As of now, Jordan looks to be smitten while being his love as the two are happily replenishing their days together.

In April 2018, he uploaded a picture with Ragan and hinted that it had been one year of their togetherness. Jordan even cited that the year he spent with Ragan was amazing, fun, exciting and awesome and addressed himself as "the luckiest guy in the world" in the caption.

With budding love and affection for each other, Jordan with his girlfriend is setting relationship goals, and the couples are adored by all their followers. Hopefully, their relationship blossoms and lasts till eternity.