By LRU Writer | On: April 01, 2021
Gospel artist Juanita Bynum is a televangelist who is known for inspiring people and also a source of empowerment for the women. And for inspiring people, Juanita derives strength from her personal stories for the one who had faced domestic violence on her two marital bonds. Despite going through depression and stressful conditions, Juanita gave love a third chance by tying the nuptial knot, which she heartily wanted to last forever. 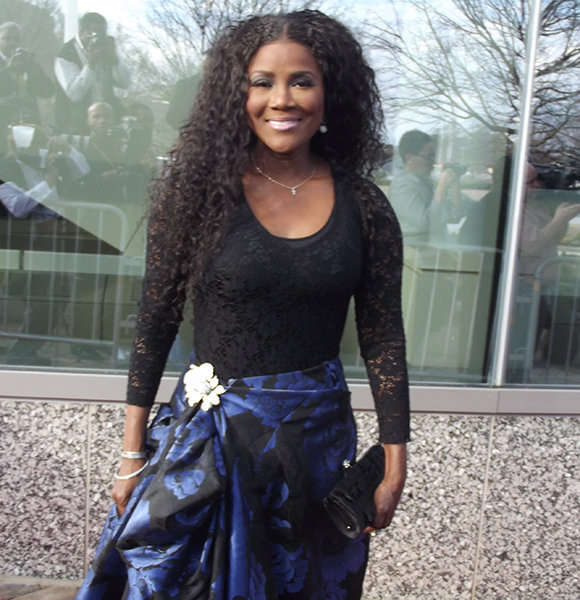 Gospel artist Juanita Bynum is a televangelist known for inspiring people and a source of empowerment for women. And for inspiring people, Juanita derives strength from her personal stories for the one who had faced domestic violence on her two marital bonds.

Despite going through depression and stressful conditions, she gave love a third chance by tying the nuptial knot, which she heartily wanted to last forever.

However, her desire remained unfulfilled as her married life headed in a different direction than she wanted.

Actress Juanita Bynum was married to Internet evangelist Bishop Thomas W.Weeks III in 2002 in the Georgian Ballroom at the Biltmore in Atlanta. Her wedding ceremony was as lavish as it can get, where the bride, Juanita, wore a beautiful bridal gown and a headband which was both adorned with Swarovski crystals for her special day.

She wanted to make her wedding a memorable one, for which the wedding alone cost $1.2 million. The bride's wedding gown took nine months to make, which cost $65,000, whereas her headband reportedly cost $6,000. When she was asked about the reason for her expensed at the wedding, she said:

"This was my once-in-a-lifetime wedding, and I did it this way because I plan to stay married.”

She described the wedding day as the greatest moment of her life. She said:

“One of the greatest moments of my life was the day that I married. That day was supposed to be the defining moment of my life when I would show the world that I had stepped into my womanhood, which was always the original intention of my dress and I refused to let it not be [by wearing it again.”

The million-dollar wedding of Juanita Bynum was aired on Trinity Broadcasting Network, and the world witnessed their union. They had also built Global Destiny Church in Duluth together.

However, her plan to stay married was broken after Thomas attacked Juanita in the parking lot of the Renaissance Concourse Hotel in Atlanta on 21 August 2007.

After this physical violence, he was sentenced as a first offender and was imprisoned for three long years. Also, he had to attend anger management classes and had to perform 200 hours of community service. She filed for divorce after a month of the attack.

When the couple was asked if they wanted to reconcile their marriage on Divorce Court, Juanita said she is done. She further explained:

"I can't speak for him, but I no longer want the marriage."

"I was just trying to make it work because I don't like losing relationships. All of this just kept getting swept under the rug ... So you begin to adapt to a very wrong and very unhealthy marriage."

After the incident, Thomas shared an apology message to his ex-wife, presumably the most important message he has ever sent. Issuing an eight-minute video email blast titled, “A Special Message from Bishop to his wife Juanita Bynum Weeks and the Global Destiny Family Worldwide.” He said,

“In the book I share my weaknesses as a husband. I also share weaknesses on the other side of my spouse. From that I have wounded her and I want to say publicly, and privately from my heart, ‘I’m sorry,’”

Well, Juanita, who has a net worth of $ 10 million, went through many problems after her divorce.

The author of the best-selling Matters of the Heart, Juanita Bynum, hasn't married after her divorce from Bishop Thomas W.Weeks III in 2007.

However, before getting married to him, she was already married in the early 1980s, and the disclosure of her first husband has not been found. She got divorced from the first marriage and later vowed that she would never talk about it.

And with her two broken marriages, she has not been seen in any relationship, and neither has she had any children.

But her second husband soon enrolled in the marital bond with the self-described prophetess, Christina Glenn, in a quiet ceremony in 2009.

However, the Georgia-based speaker confessed the most-shocking news on the “Frank & Wanda in the Morning” show in 2012. She revealed that the abuse that she had to face with her second husband led her to different directions in her life.

The host of the radio show, Frank Ski, repeatedly asked her whether she is serious or not. When she was asked the ways to bounce back from struggles or trauma, she expressed her own bitter experience of abuse she had with her ex-husband and confessed:

"That abuse I suffered was because I attracted after my own kind. That abuse was already sitting in me. I had already abused myself mentally and emotionally for years trying to fill a void that only the power of purpose can fill."

After the broken marriage, suicide remained in her mind as the ultimate option to overcome the problem. But she came out of the depression and now speaks for women's empowerment. Following her confrontation about her sexuality, she was criticized by her followers but still, she stood firm.

Juanita, an actress, singer, author, and televangelist, was born on 16 January 1959 in Chicago, Illinois, United States.

She graduated from a boarding school at Saints' Academy Church of God in Christ in Lexington, Mississippi. After graduation, she had started preaching at local churches.

Famous evangelist T.D. Jakes invited ger to a conference in 1996. And after two years, she was serving as a speaker at the same conference.

Her video and audiotape series of 1997 'No More Sheets' went viral and recognized in the Christian circle. She then started to organize 'Women's Weapons of Power Conference' until 2006. A year later, she released an album entitled 'Piece of My Passion.'

She makes a regular appearance on the Trinity Broadcasting Network, and as of today, her net worth ranges around $10 million.