Justin Beiber's Manager Scooter Braun's Star-Studded Wedding With His Wife! Have a Look The Cute Baby

By LRU Writer | On: June 11, 2021
Behind every successful singer, there are big record labels and witty managers who professional take care of the singer's music, video, promotion, and timing. Similarly, behind the star like Justin Beiber, there is the invisible hand of manager Scooter Braun, the manager of two record labels School Boy and Raymond Braun Media Group. 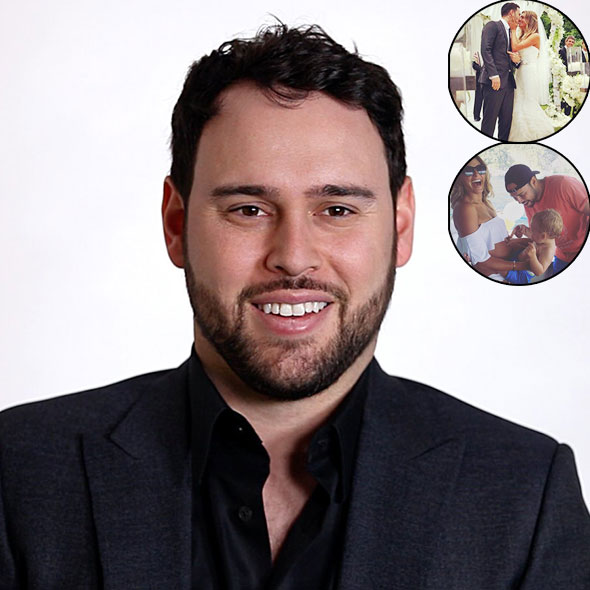 Behind every successful singer, there are big record labels and witty managers who professional take care of the singer's music, video, promotion, and timing. Similarly, behind the star like Justin Beiber, there is the invisible hand of manager Scooter Braun, the manager of two record labels School Boy and Raymond Braun Media Group.

So, today we shall learn about the man who makes the star a superstar and also know about Scooter Braun's star-studded wedding with his wife along with his personal details.

Despite creating stars in the entertainment field, Manager Scooter Braun became an ultimate star himself when he disclosed about his relationship with the CEO of a Cancer organization, Yael Cohen since early 2013.

The relationship was confirmed when the manager publicly expressed his excitement of being the luckiest guy after receiving a big yes from Yael on 6th January 2014.

That post not only gave the green signal but also invited plenty of best wishes from his fan following along with his fraternity friends on his Twitter account on 6th January 2014.

The happiness of the man did not only confine to his Twitter account, but he enhanced it more by posting the picture of a big neon "Yes" on his Instagram post on the very day. After all, his entire life revolved around the "yes" of Yael, a much bigger event than any of his music event.

Caption: The neon "Yes" when Yael accepted the proposal of Braun on 6th January 2014.

The year 2014 did turn out to be the luckiest year for Braun when in the early month of January 2014, the news of their engagement went viral in the social medias.

The news got confirmed when his close friend Carly Rae Jepsen, congratulated Braun for his engagement on Twitter. Well, that was not only a plaintiff "yes" posted on the Instagram but a big yes for the marriage proposal.

It was a hush-hush ceremony until his friend revealed on the social site. Therefore, neither the ring picture nor the engagement events have been disclosed by the manager.

Even though Braun has not revealed about his destined love with Yael but he has wholeheartedly welcomed his relationship with Yael by expressing his level of happiness.

Just after the six months of engagement on  6th July 2014, the duo exchanged their vows in Whistler, Canada. The wedding was a star-studded one as most of the of the high profile socialites and singers like Justin Bieber,  Carly Rae Jepsen, Tom Hanks including his wife Rita Wilson, Sofia Bush and singer Ed Sheeran attended the wedding.

The reception of the marriage comprised of the famous songs sung by the star Justin Beiber and Carly Rae Jepsen. Bieber immediately took charge of the song of The Bettles” All You Need Is Love” when the duo was announced as husband and wife. While the singer Carly took the stage by performing the hit song “Call Me Maybe.”

Caption: Justin Bieber added a spark in the marriage of Scooter and Yale as posted on 9th July 2014

Yes, it was the best wedding attended by their family and friends so far. Loads of singer celeb gathered at one place which ultimately brought in more music, dance and loads of enjoyment in the party.

Till date, no rumor of the duo getting divorced or separation has hit the headlines. The man is plaintively happy with his wife and has no intention of leaving her soon. They make a lovely pair and a happy couple.

Is he planning for any Kids or does he already have one?

After getting married in the year 2014, in the year 2015, the man and his lady love welcomed their first child in the Los Angeles on 6th February 2015. Although the new parents did not reveal their story of their baby, the inside source told about the excitement of the newborn baby named Jaggar. As posted by US Magazine on 7th February 2015, the source said:

“They are head over heels and are so great together.He is really happy."

The lady has posted lots of picture of her son on her Instagram account despite the fact that the couple chose to keep their big news hidden to their fans.

Nowhere I'd rather be ??

Caption: Yael with his son Jagger spending quality time together(2016).

The silence had disappointed the fan followings, but this time the pair announced the news of their second child through Yael's Instagram account, on the occasion of Father's day on 19th June 2016. Yael posted a beautiful picture of her bulging belly with Jagger on her hand along with Scooter pointing towards her belly.

Happy Father's Day my love, let's have another baby to celebrate! ??

Caption: Scooter with his wife and son Jagger announcing the pregnancy of second child.(2016)

The couple has not revealed any further information about the new member of the family. Therefore, the newborn may be a little brother for Jagger or a baby sister. But whatever gender the baby might have he or she will be a born millionaire.

Learn about the Net Worth:

Owning two record labels like labels School Boy and Raymond Braun Media Group the manager Scooter Braun owes the total net worth of $50 million. Similarly, his net worth added an extra few millions when he was reported to sell his house located in Hollywood Hills West for $9.5 million.

Caption: On an interview posted on 5th May 2016, the manager spoke about adding Kenya West on his list.

In a conversation with the show host Charlie Rose he said:

“A lot of people have an assumption that he might be selfish or arrogant. The guy who I’ve gotten to know who I am learning to translate to others is someone who literally got himself in financial trouble because he would give the shirt off his back to help someone.I want to help take his journey to where he wants to go.”

Okay, the man is expanding his net worth after having worked with some brilliant stars and singer. Now he wasn’t to change the mindset of people by presenting Kenya in his best form. Well man, good luck in this case, as you are the only one who has confidently spoken about Kenya while his previous managers are still struggling to hold his status in the media and professional front.