By LRU Writer | On: January 06, 2019
Kevin Chappell, an American professional golfer, is a married man with a family. He is married to his wife whom he met back in...they crossed path during...and sparked the romance instantly. In...Kevin presented...with an engagement ring and after...they exchanged the wedding vows. They are proud parents to their two children... 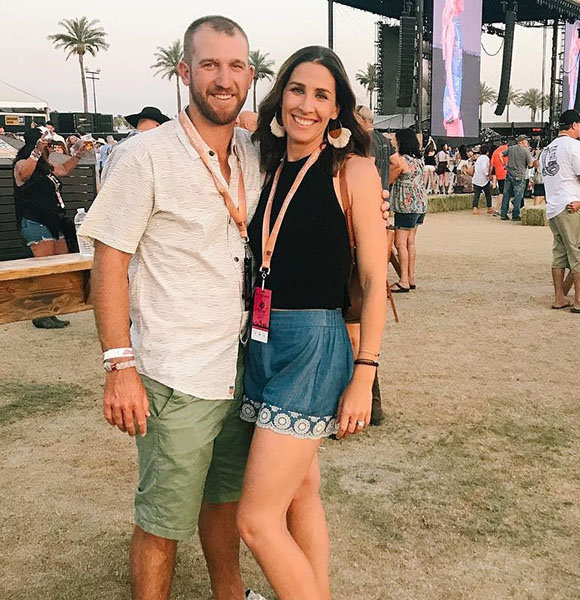 American professional golfer Kevin Chappell, who is currently -playing on the PGA tour, shares happily ever after story with his wife and kids. Even though he faced a loss of his brother in the past, he now is content with love that he shares with a family of his own.

While he has a shining career as a professional golfer, he also excels at being a husband and a dad. Yes, you got it right! Kevin not only shares awing romance with his wife, but he is also a proud parent to his two children.

Kevin Chappell, a 23rd in the Official World Golf Ranking, is a married man with a family. He exchanged the wedding vows with his longtime girlfriend Elizabeth, a Seattle-based personal trainer.

The couple was first set up by their college friends, Craig and Andrea, who believed that they would be a perfect match. Even though both were enrolled at universities 1200 miles apart, their roommates were rooted to spark romance between the two.

You May Like: Kelly Tilghman Gay/Lesbian Rumors Are Fake! Married Life Of PGA Broadcaster Revealed

Kevin and Elizabeth finally met for the first time during their friends' wedding in 2011. In their first meeting, the duo hit it off really well and finally realized that their friends were right after all.

The duo dated for almost a year while Kevin flew to Seattle during a week off from tournaments to take Elizabeth on dates spend time with her. Not long after they shared something serious, Elizabeth moved to Arizona to be with Kevin.

After dating for a year, Kevin popped the question to Elizabeth when he was at the CordeValle Golf Club. After a practice round, he got down on one knee and asked Elizabeth to marry him with the song "Marry Me" by Train.

After the pair got engaged, they planned for their wedding and exchanged the wedding vows on 28 September 2013. Their wedding was accompanied by close friends and family. A month later, in December 2013, Kevin and Elizabeth took off to Fiji for their honeymoon. As of now, Kevin and Elizabeth are not only husband and wife, but they are also parents of two adorable children. Their son, Collins is at the age of three whereas their daughter named Wyatt Casey Chappell will turn two in January 2019.

While Kevin is content with his family life now, he previously faced the loss of his older brother, Steven Casey Chappell. Casey, who was one of Kevin's biggest fan lost his life in 2007 due to heart failure caused by diabetes.

Only six days before Casey's 25th birthday, Kevin had to deal with the loss of his biggest supporter. The sudden loss was hard on Kevin but he eventually found his way back.

He moved on with his career with the hope that he would fulfill his brother's dream of watching him become successful. Kevin, who has earnings of $1,566,769 that adds to his net worth, dedicated the whole season to his brother and played to honor his death.