By LRU Writer | On: February 26, 2019
Lauryn Hill fled to the Carribean, where she ignited a romance with musician Rohan Marley, the father of her five children...But, was it enough for them to get married though...she and her once-husband prospect enjoyed 15 more fruitful years... 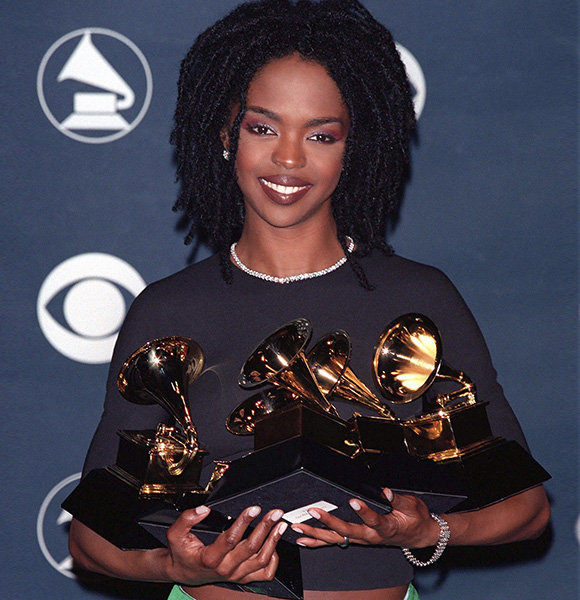 Dubbed the greatest rap album of all time, The Miseducation of Lauryn Hill was musician Lauryn Hill's most soul-bearing and sadly, the only solo record till date. Released in 1989, the now-classic LP won rave reviews, including the prestigious Album of the Year at the Grammys among a plethora of awards.

The circumstance on which it got created is no less compelling. Fresh off the breakup from the group The Fugees & fellow bandmate Wyclef Jean, Lauryn fled to the Carribean, where she ignited a romance with musician Rohan Marley, the father of her five children.

Throughout the years as parents to their kids, the South Orange, New Jersey native and the son of legendary singer Bob Marley maintained a rock-solid relationship. But, was it enough for them to get married though? If not, who's her husband?

Read along to find out and learn more personal details including height and net worth!

Married Or In Relationship? Father Of Children & Husband Same?

It all began when Lauryn came across Rohan in 1996 while touring with The Fugees. Within a year, she got pregnant with the duo's first child, Zion.

After breaking things off with Wyclef, with whom she was in an on-&-off relationship for years, the Doo Wop hitmaker moved to her then-boyfriend Rohan's native land of Jamaica to work on her first solo release, which would eventually become The Miseducation of Lauryn Hill.

Although never married, she and her once-husband prospect enjoyed 15 more fruitful years as a couple, welcoming four more children - Selah, Joshua, John, and Sarah - in between, before calling it quits circa 2011. Lauryn Hill alongside her once-husband prospect, Rohan Marley and their children pose for a family portrait circa 2000s (Photo:- hellomagazine.com)

At the center of their fallout was Lauryn's pregnancy stemmed from an affair with a yet-to-be-named lover.

In later interviews, Rohan bluntly suggested that the "Nothing Even Matters" hitmaker's alleged affair caused their relationship to crumble. To his credit, he managed to pull his life together, marrying Brazilian model, Isabeli Fontana a year after the split. Lauryn, on the other hand, not so much.

Personal Details - From Age To Siblings

In the Killing Me Softly songstress' defense, she had her hands full with legal woes stemming from tax evasion charges.

Following the split, Lauryn - despite boasting a reported net worth of $8 million - found herself deeply entrenched in financial problems after IRS charged her of evading $1.8 million in taxes. A year later, in 2013, the mother of six - who stands five feet and two inches in height - served four months sentence for the very criminal act.

Regardless of her troubles, the story of how Lauryn made her millions, considering where she came from, still serves as an inspiration to many. Raised by middle-class parents - her father Mal and mother Valarie were computer consultant and English teacher respectively - she grew up in a musically-inclined household alongside Malaney, her only known sibling.

Now 43 years of age, the Ex-Factor singer is experiencing grandmotherhood for the first time while her daughter goes off to college.