Lucas Coly In A Confident Yet Cozy Dating Affair With Girlfriend; Young & Pure!

By LRU Writer | On: January 29, 2018
Lucas Coly In A Confident Yet Cozy Dating Affair With Girlfriend; Young & Pure! With the winning mix of dynamic talent, flawless good looks and budding followers, the rapper and internet star, Lucas Coly is undoubtedly one of the famous internet sensations. 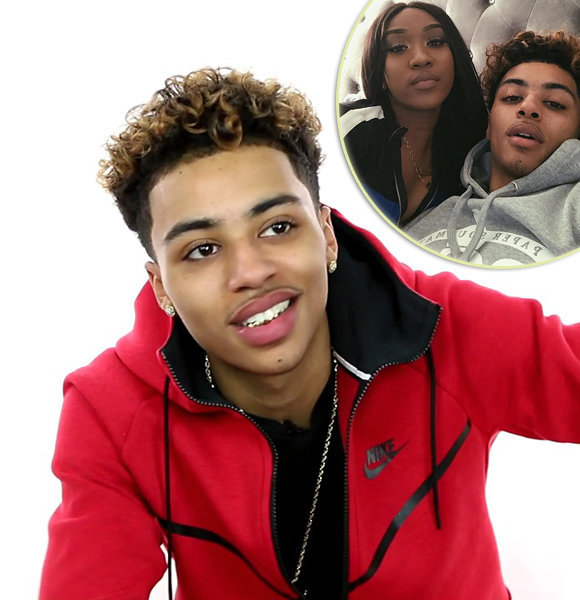 With the winning mix of dynamic talent, flawless good looks and budding followers, the rapper and internet star, Lucas Coly is undoubtedly one of the famous internet sensations.

Aside from the successful career, Lucas is also enjoying a young and pure love life with his girlfriend which seems confident and cozy. So let's take a closer look at the love life of Lucas and find out everything that may have missed your sight!

The Rapper and internet personality, Lucas is currently in a happy relationship with the beautiful girlfriend Amber H, who is a fellow Instagram star and vlogger. The couple started dating since 2015 and has not been shy to flaunt their confident and cozy love in public by posting several photos through social media.

Here is one of those pictures where the duo sparks their confident and cozy relationship.

Almost after two years of their romantic union, the pair celebrated their two years anniversary on November 26, 2017. Lucas shared a beautiful picture of the pair expressing his loyal and sustained love for his lady love in the caption.

On the same day, Amber also posted a video on Instagram which embarked their journey of love. In the caption, she wished Lucas 'Happy Anniversary Luva' revealing that they had been together for two years.

With the numerous appearance on each other's Instagram post, it is made clear that Lucas is confident enough to glaze his cozy love in front of the masses. More on, both pair seems so much smitten with each other's love.

Although their love seems to be getting stronger as the day passes, they haven't come up with the thought of soaring their relationship to next milestone.

Born in France, in the year 1997, Lucas Coly is also known as Kid Lucas among his followers. Lucas, who celebrates his birthday every year on 8 July, belongs to African-American and French ethnicity.

Undoubtedly, Lucas has a dynamic talent and has also been active in flaunting it. Though he has been opening up about his love life, he has been miles away when it comes to providing some details of his parents. However, Lucas has talked about his little brother several times on social media.

Talking about his professional career, he debuted as a vlogger by posting the first video on Vine on July 9, 2013. He earned the popularity during mid-2014 with more than 450K followers on Vine before the app came to a halt.

As a YouTuber, Lucas uploaded his first music video on his YouTube channel under the name "Lucas Coly" on August 1, 2013. He is also a former member of trio Tha Diamondz, Willie Fryson III, and Dillyn Troy.

Besides, Lucas has also collaborated with his friend Nonso in the musical duo "Lucas and Nonso." Likewise, he released the mixtape 'Prince of France' in September 2016, which has 20 tracks. His song " I just wanna" from the tape is able to reach the height of success with more than 8 million views on YouTube and is his most famous video on his channel.

Amidst the shenanigans, one of the fans of Lucas asked him about his thoughts on having gay fans. At the wee age of 20, Lucas showed a lot maturity and love for his fans, stating that he is not here to judge anyone as he is here to love and support the people who love him.

By scrutinizing the fact, what we can say is that Lucas is not just an internet personality with budding followers, but also a man with maturity!

With the astonishing talent and increasing number of followers, Lucas has come a long way to establish himself as one of the top internet sensations with a fine figure of salary; however, the actual figures of the net worth of this young star remains confined till this date!