By LRU Writer | On: May 07, 2018
American actor Lucas Grabeel has been enjoying the time of his life! The teen heartthrob has found solace in the arms of his loving girlfriend while maintaining a successful career. Tagged with a beloved partner, Lucas seems inseparable with the love of his life.   But the million dollar question strikes whether the High School Musical actor will level up his relationship to marriage or not. 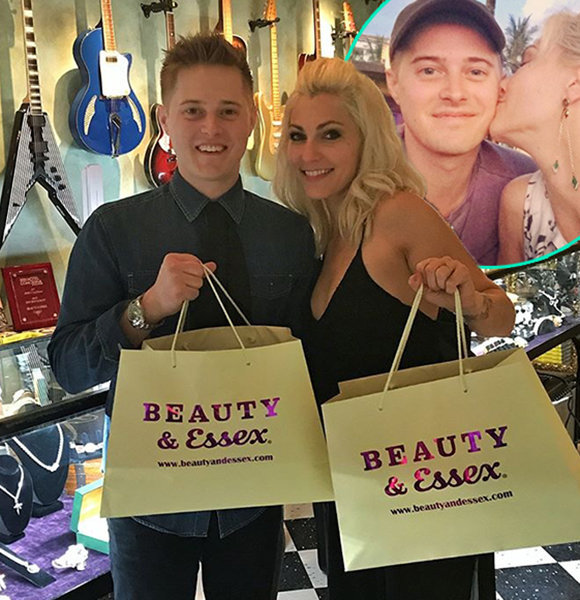 American actor Lucas Grabeel has been enjoying the time of his life!

The teen heartthrob has found solace in the arms of his loving girlfriend while maintaining a successful career. Tagged with a beloved partner, Lucas seems inseparable with the love of his life.

But the million dollar question strikes whether the High School Musical actor will level up his relationship to marriage or not.

Well, let's find the answer in an overview of Lucas Grabeel's love life!

Rumored To Be Engaged With Girlfriend; Attends Wedding

Lucas Grabeel is involved in a long-time relationship with actress Emily Morris. The couple has been dating each other nearly for a decade.

The Switched at Birth actor is quite open about his love life and enjoys sharing the glimpses of his romances via his social media. On 10 August 2015, he shared a picture of the two lovebirds and mentioned in his caption that he was sad and anxious to drop off Emily at the airport. Back in 2016, the couple was even rumored to be engaged after Lucas posted a picture of the lovers on 1st January 2015, with a caption quoting,

"Peace and love y’all. Did something happen last night?”

However, the rumors were still to be confirmed as no further news of their engagement surfaced in the media.

Further, Lucas enjoys traveling with his girlfriend, and the couple has visited several destinations together including Hawaii and Atlanta. The duo is also an adventurous couple also finds joy in exploring the wilderness together.

Currently, Emily is living out of Los Angeles for about six months. However, the long distance has not affected their relationship in any way. On April 28, Emily shared a picture of the two from the LA Airport and revealed that she would be living away for six months, to which Lucas replied that he would spend the rest of the six months crying alone at the bar. Lucas bids farewell to his girlfriend at the airport on 28 April 2018 (Photo: Emily Morris' Instagram)

Further, it looks like Lucas has already thought about spending the rest of his life with Emily. Although he has made no immediate plans on getting married, his enthusiasm witnessed on his social media cannot be overlooked.

On 22 December 2017, he posted a picture of his friends, a newly wedded couple, and thanked them for letting him join the ceremony. Chances exist that Lucas is planning a romantic proposal for Emily when she returns to Los Angeles and they can finally pronounce each other as husband and wife.

Lucas has a pretty smooth relationship now, but in the past, he had to through a couple of breakups. Also, at one point in time, he was also rumored to be a queer. Before Lucas found the love of his life, he had dated a couple of women including Sara Paxton, Brittany Snow, Pamela Saunders II, and Hannah Heart.

One of the most talked about affairs of Lucas was with actress Sara Paxton. Lucas dated Sara for about two years from 2006 to 2009, from later separated without providing any explanation. To this day, the reason for the couple's split is not known.

Moreover, Lucas also shared a complicated relationship with his High School Musical co-star, Ashley Tisdale. Although the two hated each other during the running years of the show, after the show ended, they developed a likingness for the other. Ten years after the ending of the show, they reunited for a song titled, What I’ve Been Looking For, and have even confessed the love for each other only as a friend.

Lucas, who played the role of a homosexual in the 2008 movie Milk, was rumored to be gay due to his realistic performance in the film. However, the speculations were crushed after he released a statement in an interview, saying that just because he was portraying a gay man doesn't make him gay in real life.

Well, considering his on-going dating and past history of dating affairs, Lucas surely answered the gay rumors and speculations.