MaryVaughn Harvey: Former Wife of Steve Harvey, Divorced In 2005. What Happened Behind The Scenes?

By LRU Writer | On: December 02, 2016
The secretive divorce of Marcia Harvey still widens the eye of the readers. The TV actor had caused a sensation in media by filing a divorce with Steve Harvey. Not a single soul knows about the actual reason causing it. Therefore, today we are covering the inside story of Marcia Harvey and about her personal life for her followers. 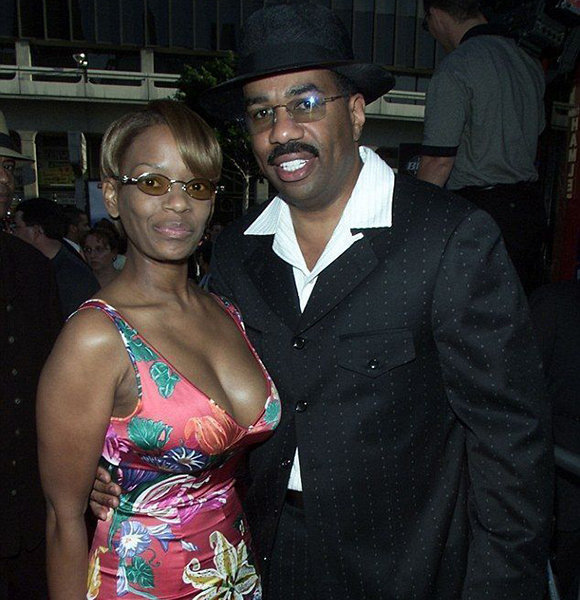 The secretive divorce of Mary Harvey still widens the eye of the readers. The TV actor had caused a sensation in media by filing a divorce with television talk show host and self-proclaimed "Relationship guru" Steve Harvey. But it doesn't seem the relationship guru is not that responsible of a man himself. Therefore, today we are covering the inside story of Mary Harvey and about her personal life and history with Steve Harvey for her followers.

The reason for Divorce: Extramarital affair or infidelity?

Mary Harvey released 3 different videos on youtube stating how Steve treated his marriage with her as well as how he reacted during the fallout of their marriage.

By releasing a video on YouTube and publishing the letter sent by one of the mistresses to Steve, the former wife has given a clear cut clarification of the divorce. In the video, she has revealed about Steve cheating on her current Marjorie and how Steve had turned her children against her.

In 2011, Mary revealed the truth about her relationship with Steve Harvey and moreover the aftermath of their divorce in 3 different youtube videos. These 3 videos were reuploaded after Mary's original channel was taken down by Youtube for reasons unknown. The videos show Steve’s painful treatment towards his wife and how their relationship started and ending.

In her first video, Mary talks about how her relationship started out with Steve and how Steve Harvey became the man she is. Steve tried to woo her from the moment she met, not only visiting her during her work but also writing her poetry. That's right the religions preacher wrote Mary beautiful poems, and she fell for her because of it, eventually.

But she also talks about the sacrifices she made for Steve. The couple were homeless, were barely getting by, and scraping changes and even stole gas to survive. She talks about her child, Winston, who, according to Mary was being strangled during his birth by the umbilical cord and suffocating and she had to go through an emergency c-section to survive.

Shortly after this, on her 2nd marriage anniversary, Mary found a letter addressed to Steve by one of his mistresses. This letter broke her heart, and it will break yours too.

The letter revealed by Mary which had been written to Steve by one of his mistresses: Caption: The letter written by one of the Steve Mistresses

Steve's treatment of his wife and his mistress were awful but what he did next was even worse.

Mary states how she confronted Steve Harvey about her mistresses and his cheating affairs but Steve never provided answers and instead just left without any answers. According to her Steve never tried to deal with his issues and belittled her. The comedian sent a housekeeper to pickup all his stuff and didn't even appear in the court for divorce procedure instead.
Not only that but Mary claims that Steve took her son, who she almost lost her life for, and turned him against her. Through his political contacts and manipulation, Mary asserted how Steve took her businesses, which she owned along with Steve and had her evicted effectively leaving her penniless and broke.

Not only that but Steve even filed a lawsuit against Mary, putting her in the blame when Oprah refused to give Steve Harvey a tv show.

Mary eventually was fed up with Steve's treatment, and after being dragged through the mud by media's treatment of her, she finally decided to come to the spotlight. After reading Rhonda Frost and Shanae Hall's book 'Why do I have to think like a man' which is a response to Steve Harvey's book 'Act Like A Lady, Think Like A Man,' she finally found the courage to speak the truth.
This so far has been a wild story, but that is the least of the stories about Steve Harvey.

Nobody is perfect, Steve Harvey isnt either. The man has errors, but the way he sees himself as well as berates people who do not view the world as he does is even more sinful.
Steve takes quite a lot of pride for being a religious person, even sharing spiritual wisdom at the end of his shows. That is fine, and all but Steve more than frequently comes off as, not a pious man, but a rude zealot and quite ignorant as well. He has stated his hate on atheists multiple times on live media, ridiculing not only them because according to him "They don't have a moral barometer." but also questioning the laws of Evolution itself. He has also said,

We evolved from monkeys, then why are there monkeys?

In the Miss Universe 2015 pageant, Steve Harvey was assigned as a host but in finals during the announcement of the winner, Steve managed to misread a 5 letter word note on his hand and mistakingly crowned Miss Columbia Ariadna Gutierrez as Miss Universe instead of the actual winner, Miss Philippines Pia Wurtzbach breaking both their hearts.

Speculations have been made that Steve was under the influence of alcohol during the event. This mistake of his sparked flames all across the world.

But that's not all really. Steve Harvey has also come off as misogynistic, gender generalizing, homophobic and overall a rude person who makes jokes at the expense of other's dignity multiple times on live media.

Where is Mary Now?

Last known details about Mary was that she was in jail. Mary Vaughn was arrested in 2013 for badmouthing and insulting Harvey amongst other reasons that had to do with her divorce. She served 30 days in prison and eventually was bailed. In 2015 Mary was a witness in a lawsuit against Steve Harvey that was worth $20 million. Since then not much details about her has surfaced, and we will keep you updated in any cases related to Mary Vaugh or Steve Harvey.