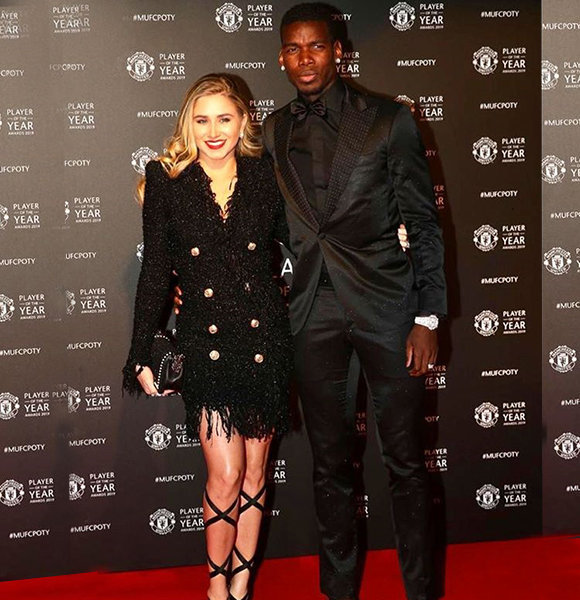 Maria Salaues came into the radar when she started dating the famous Manchester United player, Paul Labile Pogba. Despite the bright spotlight of her partner's career, Maria has kept most of her relationship under the wraps.

Nevertheless, scroll through to learn more about her relationship, possible secret nuptials, and their small family of three!

Born in 1994 to parents Ricardo Salaues and Karla Antelo, the model's birth name is Maria Zulay Salaues Antelo. Aged 25 as of 2019, Maria likes to enjoy her birthday in a low-key fashion.

She is the youngest sibling in her family with two older sisters named Gabriela and Carla, who are both models by profession. She spent most years of her childhood in the town of Robore, Bolivia; and is a Bolivian by nationality.

Regarding her physical appearance, Maria is an attractive woman. The blonde stands with an average height, which is complimentary with her partner. Part of her beauty comes from her Amerindian ethnicity.

The model now resides in California but also divides her time between Miami and Manchester.

Being such a beautiful lady, most men would have their eyes set on her. However, Maria is unavailable as she has been in a relationship since early 2017. Maria and Pogba came out to the public with their relationship after being spotted together in Los Angeles in the summer of 2017.

However, they have managed to keep the crucial details of their relationship away from the media and the public. Nevertheless, picking up on subtle cues, fans did notice rings on the couple's hand when they walked the red carpet for the United's Player of the Season in 2019. Many assumed that the ring hinted towards a step-further in their relationship.

Maria has also hinted that the couple had a secret wedding. On 23rd June 2019, she shared a photo of herself and her partner in what looked like wedding attires. Furthermore, she has also changed her Instagram handle to Zulay Pogba. Maria Salaues with her partner and son at Abu Dhabi, the United Arab Emirates on May 2019 (Photo: Zulay Pogba's Instagram )

Whatever the label of their relationship might be, the couple are every bit of husband and wife to each other. With their time together, the couple are parents to a son. Pogba celebrated the arrival of his child with a baby-step penalty routine against Brighton & Hove Albion at Old Trafford in January 2019.

Maria was always interested in the world of fashion. At the age of 18, she managed to win the crown of Miss Expobellezain 2012. For her education, she later enrolled at the University of Bolivia Business Administration.

However, in pursuit of her passion, Maria dropped out and moved to Miami in 2015. Doing so was the best decision of her life as she managed to find success in a short period. She even had the opportunity to be the spokesmodel for Ipanema Sandals.

While it is reported that she comes from a well-off family, the model has successfully made a solid ground to stand on for herself. The amount she is receives from her job is undisclosed. However, with her level of expertise and experience, Maria certainly gets paid more than the average salary of a model of $132K. Considering her partner's incredibly successful career, Pogba takes home $33 million every year and possesses a net worth of $85 million.